I periodically use the term “data object” in my blogs.  Since I do not normally blog about data objects per se, I find myself simply stating that in-depth analysis might need to go beyond numbers; therefore, we should consider data objects.  This might confuse readers unaware of what a data object is - or at least what I mean by it.  To make matters challenging, readers inclined towards data science do not necessarily have much background in the liberal arts; and those with degrees in the liberal arts might not be drawn to data science.  All of this would be fine except that I tend to invoke the liberal arts in my blogs dealing with data science; and perhaps this makes my use of data objects peculiar.  In this blog I will attempt to momentarily bridge the gap.  A data object isn’t designed just to facilitate data manipulation; at times, it needs to make a complex social environment more accessible.

I call the analog clock below “Suspense.”  Suspense is a representation of a complex metric.  Suspense doesn’t actually show the time.  I would agree that it shows a time; but the time shown is not time at all.  I provide some labels to crudely explain the meaning of the times presented:  03:45:40 for “fear”; 12:50:41 for “autonomy”; and 12:20:01 for “oppression.”  I can embed certain complex phenomena in the data object intended to hold time.  Suspense can hold more meaning than what can normally be stored in time alone.  The intent of this approach is to make ecologies of interaction transferable to a system that is capable of holding time.

Suspense is detailed.  I have chosen to elaborate on a couple of its simplest aspects - only one of which is active in my examples here.  There are hours, minutes, and seconds.  Hour 3 (3:00) is known as dI:  dI is the internal outcome associated with the external income dA interacting at dS; this is shown on the next image.  What in the world does this mean?  Maybe dI is the natural happiness a child feels when playing in a playground:  there is an “inclination” to play and be happy in a playground.  Hour 3 or dI might be regarded almost on a biological level.  For me, dI is more likely to be the product of a social setting - i.e. the result of social construction.  For instance, it can be a general “impression” passed down the generations: e.g. children should be wary of strangers. 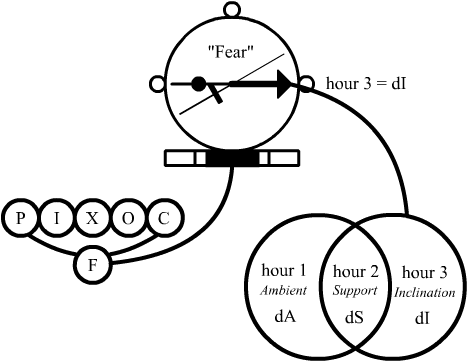 The base of the clock contains a tile indicating “F” for feedback, assuming that Systems Model in this case includes P for perception; I for input; X for process or execution; O for output; and C for consequence.  For me when approaching organizational situations, I consider three strata of the Systems Model occupying distinct ephemera:  1) anticipatory; 2) active; and 3) introspective.  These strata are associated with three pathologies:  malignment; failure; and abandonment respectively - the latter more commonly called alienation.  It is important to be aware of where Suspense is “coming from” in order to ensure the proper transposition of facts based on their proximal and distal significance.

Fear can be based on an expectation perhaps informed or qualified by one’s investigations.  But for me fear tends to be a visceral phenomenon that is not necessarily the product of deliberation or one’s education.  People are “inclined” to fear certain things in particular circumstances.  Fear is invoked by the hour hand at 3.  What does the minute hand at 9 (minute 45) mean?  Minute 45 means a large negative impact.  The second hand at 40, this describe how the negative impact is encountered, in this case by a complex process that depends on factors beyond one’s direct control.  So this is a particular kind of fear - such as fear from a lengthy cancer treatment known to have severe consequences.  It is a particular “fear of the unknown.”

Suspense is based on something I call the Pond-as-a-System Model, which I developed myself.  I am unsure how much credit I can take for the model since a number of features suspiciously resemble existing models.  So at the moment, I claim no intellectual ownership.  In fact, some people might say that even the frog seems to be from the arcade game “Frogger.”  In any event, these superficial similarities start to fade once a person delves into the schema and metrification scheme. 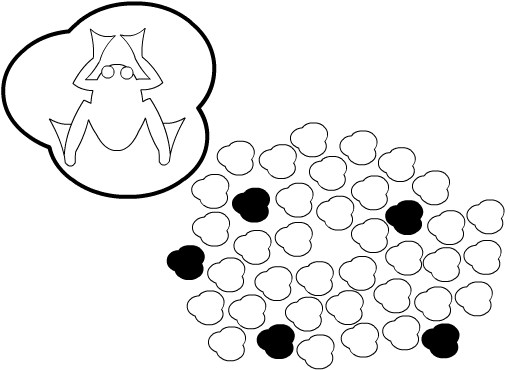 I make the following statements in relation to the model: 1) people make decisions based on their habitats; 2) interaction with that habitat is influenced by the organism and the habitat together; 3) movement depends on the effort needed; and 4) stasis depends on the opportunities available.  I know this all seems rather spatial and physical.  However, consider the image below showing a “social” setting.  In it, I am trying to determine how to take control of the thermostat in the office.  (The temperature seems to rise inexplicably.)  I suspect that either the device is malfunctioning; or certain individuals might be tampering with the setting.  I ponder on maybe contacting my friend Diana at head office to exert some control.  Diana says it is impossible for her to control the setting of any thermostat from head office.  She laughs that I would think her so magically endowed. 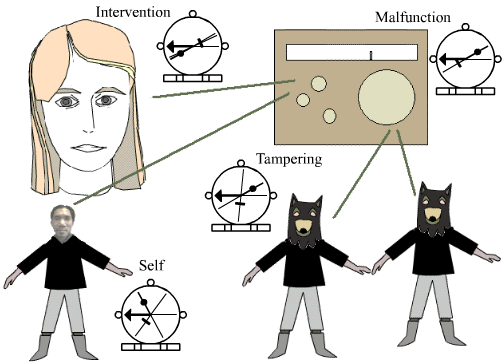 For those that find the analog clock a bit confusing, it is perfectly reasonable to use time itself or the codified notation I presented earlier.  Personally, I would find a numerical expression of time - e.g. 12:45:40 - completely baffling from an interpretive standpoint.  I have to emphasize that Suspense uses but does not actually show the time.  Therefore knowing the time is of no help at all unless my objective is to tell time.  If I could convert the time to its meaning on the model all in my head, then I would be thinking like a computer.  Sadly, I don’t.  I find that after some practice I can get along fine using Suspense - by interpreting the analog.  I would probably have a fighting chance making use of the codified notation.  In my sketchbooks, I use the Suspense analog.

Contemporary urban terrorism to me is much a case of system malignment.  It is complicated operating an airport or subway station; using this system not to serve passengers but to spread fear among them is a form of malignment.  Terror is effective because somebody has furnished, at their own expense, the means to bring large numbers of people together in specific locations in a predictable manner.  The “system” itself is used to spread terror.  I find that our dependency on systems is such that malignment is quite a common development.

Malignment occurs at the anticipatory stratum conceptually before plans extend into actions.  It might not be feasible to make the active or operational stratum impervious to terror for the simple reason that the system itself is premised on a high level of public access.  As it has been well-established that the transit system is vulnerable, any additional window dressing to assert its invulnerability might be superfluous.  Assuming that attacking a transit system is a means to an end rather an end in itself, it can be worthwhile examining aspects of alignment and malignment in an effort to bring the end into question - thereby negating the need for a means.

There has been a tendency it seems to attach “foreign motivation” to both foreign and local perpetrators.  For example, some effort has been made to fight “foreign radicalization” by identifying radical websites presumably to quell the impulse.  But it is quite a leap for a local person to become driven by foreign interests.  I consider the adulteration of a local a more interesting proposition than foreign incursion.  In order for a person to believe in persecution - enough to wish to violently changes to the system - perceptions need to be substantiated by the realization of injustice.  This is not to say that injustice occurred but simply that it is perceived.  The system in place ostensibly to help people must instead seem to harm that person.  Rather than having a means to explain the status quo, there should be suspicious vacancies to allow the perpetrator to fill the missing details.

The potential perpetrator fills the habitat uncontested thereby creating bridges for foreign interests and others of likeminded persuasion.  The process of decitizenship might be linked to the pathology of abandonment occupying the introspective stratum.  This is the narrative that I offer; and I suspect that there are ways to combat it.  On closing, I leave one final drawing of Suspense analogs showing a gradual change in alignment.  The premise here is that a person doesn’t change from an innocent to a mass murderer simply by encountering a few suggestive websites.  The process of withdrawal is linked to the social environment.  The ability to measure that change - that is to say, to attach a measurement to the changing path that a person follows - might be useful to predict future developments. 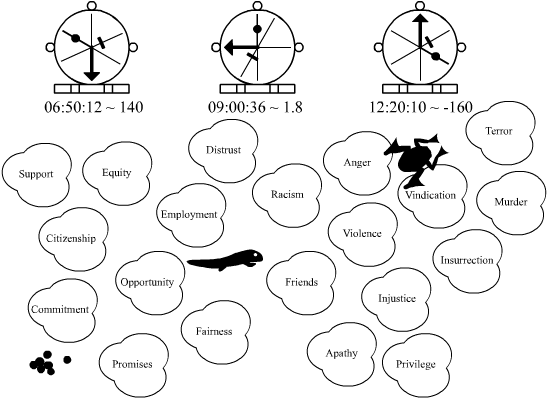