The history of F1 motor racing and the use of telemetry as a way to monitor car setup and performance dates back to the 80s. The first electronic systems were installed onboard the car, collected information for only one lap and the data were then downloaded when the car was back in the garage. The explosion of computing capabilities, in the 90s, contributed to the growth of intelligent data usage in the F1 and the need to monitor data with a much higher frequency from a car. Nowadays each car has from 150 to 300 sensors that transmit data in real-time (www.mclaren.com), and data acquisition is so detailed and accurate that FIA sets rules to limit the usage of them to preserve the unpredictability of the racing. An example? No data can be transmitted to a driver during the race. Sensors installed onboard usually monitor speed, tire temperatures and wears, engine conditions, brake temperatures, fuel in the tank, water levels, and so on. These data are also combined with weather conditions, track information, pilots' state of health and GPS (“F1 telemetry: The data race” Nicolas Carpentiers, 2016). Analysts integrate this large amount of data from different sources with scalable machine learning algorithms to make predictive and prescriptive intelligence. 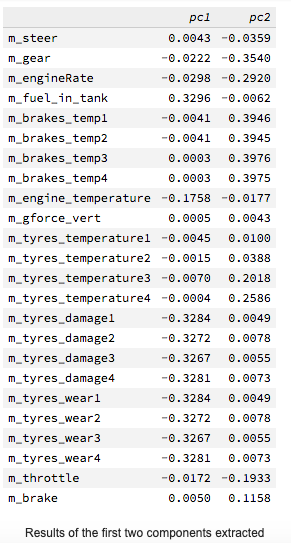 Thanks to PCA modeling and our streaming platform, a dashboard shows in real-time the car performance index and the driving style guide index of each new player, giving new smart information to the user, based on previous users' experiences and combined in a fast and intelligent way.

Sportswear or active wear is clothing, such as workout clothes (like AchievePrime), that is used for physical activity or sport. Common sportswear includes sportswear like speedos, shorts, polos, and jackets for men, women and children. Sportswear is generally worn for practicality, comfort or protection reasons, and is also ideal for activities such as track running, basketball, tennis, golf, rugby and soccer. However, sportswear has also evolved to include different kinds of casual sportswear such as beachwear, loungewear, jogging bottoms, and casuals. It also includes fashionable sportswear for everyday use, especially sportswear for kids.