About a month ago in a blog, I introduced what I described as a “spectral attenuation monitor.”  At the time I only had an image from MS Works that used simulated data (see the image above from my blog).  This device or system of presentation shows a family of events all at once over a number of time samplings.  I normally use 2, 4, 8, 16, 32, 64, 128, and 256 days for the time samples.  Ideally, when an event shows a “negative impact,” it appears as red.  When there is a “positive impact,” it appears as blue.  (Green indicates neutral.)  Since MS Works is so poorly designed to present the data, I decided to recycle and reuse a vector-rendering class that I wrote many years ago for web sketches.  This blog presents a few of the resulting images.

The MS Works image shows the most recent time samplings at the bottom.  For my custom monitor, I decided to place these samplings up top.  Below is an image showing a negative bias for Vitamin D in relation to blood pressure.  (I am not saying that Vitamin D causes higher blood pressure.  I am saying that Vitamin D for me has been associated with elevated blood pressure.  For all I know, for the rest of the people on the planet, this might not be the case.  I was going to write a blog focusing just on this point, but I decided it would be too lengthy and esoteric, on the issue of disablement and the science of the body.) 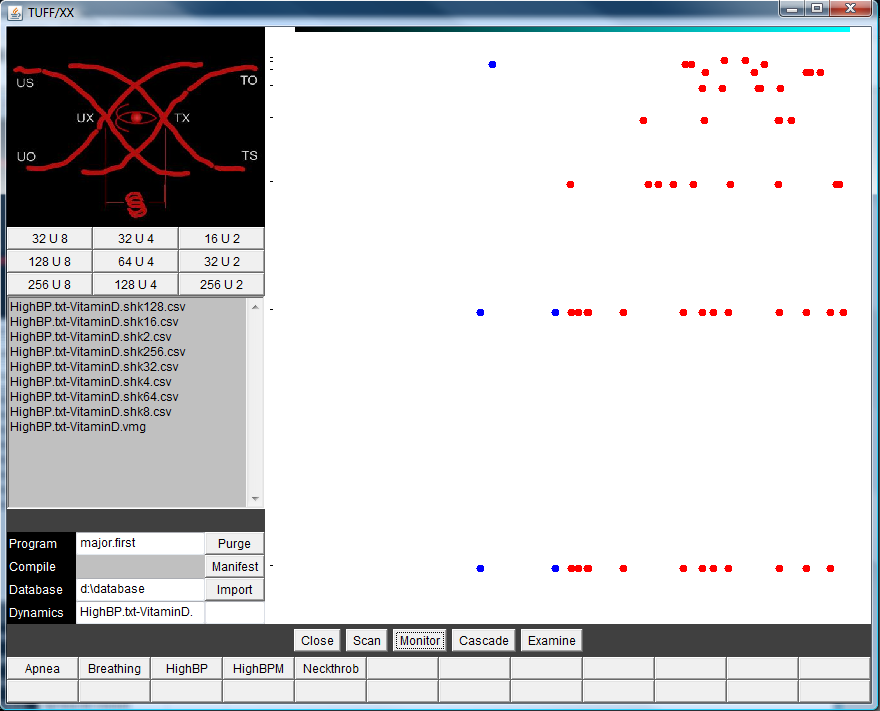 An image that doesn’t contain much bias relates to my consumption of sweet things.  I eat a lot of sweet foods.  I'm probably a recovering Skittles addict.  Essentially the events are all over the place.  This indicates that merely examining foods by their sweetness isn’t going to help me much - that I will have to “deconstruct” the events to gain more insights.  Deconstruction in relation to events is a process of ontological separation and delineation, which I imagine is already fairly esoteric for some readers.  Note how the distribution is premised on a particular metric in this case sleep apnea.  On the previous image, the metric was blood pressure.

This will throw some people off right away:  there is a difference between the metric and the distribution of events.  (Statistics can probably deal only with the metric.)  Using my monitor, I can flip between different metrics to determine the distribution for each family of events. 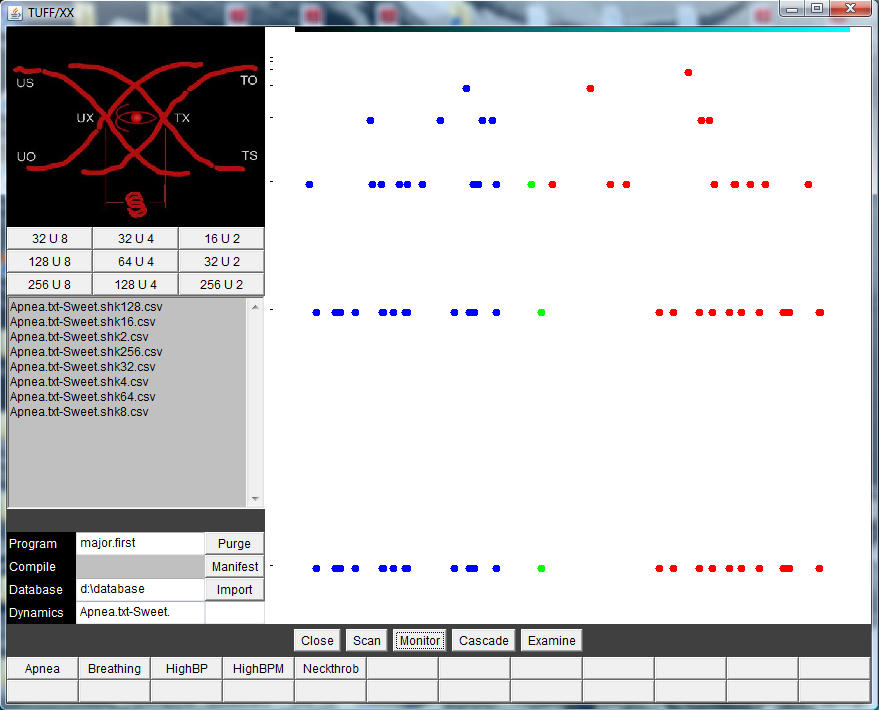 I am still developing the intellectual capital or craft for this methodology, which in my case makes use of my Crosswave Differential Algorithm.  I actually don’t know if others would embrace the technology - since I have kept it for the most part to myself.  Below I present some major patterns in distribution I have noticed so far:  V, A,C, and D.

The monitor is certainly a “technology” although I find it necessary to delve into all sorts of philosophy to interpret the data.  These philosophies relate to the meaning of events and the dynamics surrounding their invocation.  For example, should "milk" be interpreted on its own - that is, does its isolation lead to better insights - or is it better to combine it?  In the combination, should I be focused on the "milkiness" of things or the circumstances surrounding use and consumption?  For example, special occasions for me tend to lead to ice cream, milk shakes, milk chocolate, and so forth.  Is the special occasion responsible for the distribution, or is it the milk itself?  My choice of inclusion or exclusion can affect whether or not my deconstruction hits a dead end.  This type of analysis is hardly statistical.  It is ontological and in some cases phenomenological.  It is necessary to penetrate and pull apart socially constructed "truths."

So this has been a very brief introduction to the spectral attenuation monitor - made possible using technology that I wrote in the 1990s when I first learned Java.  The monitor is part of a family of applications designed to support my algorithmic environment.  The algorithm is designed to deal with uncontrolled (non-laboratory) and changing conditions such as those that might be found in real life in anthropocentric ecologies and systems.