At times it might be desirable to determine what storylines on a narrative database contain certain key elements.  In the example below, the object “Alien Allan” is used to compile a listing of titles on the database that are in thematic agreement.  But rather than simply provide the listing of titles, the algorithm tabulates the key elements contained in these titles.  Notice that the most important elements resulting from the search do not necessarily match the elements in the submitted object.  We can conclude, for example, that “technological failure” and “armed tactical response” seem to be reoccurring events in relation to storylines consistent with Alien Allan. 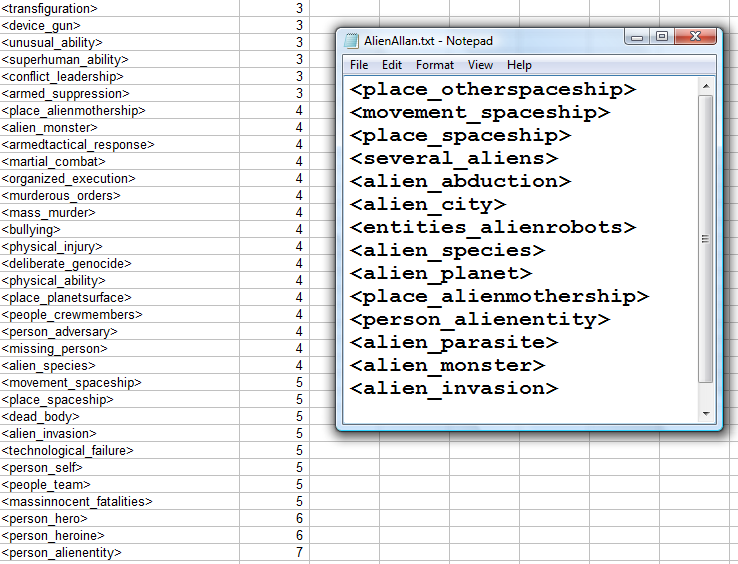 The interaction between the submitted objects and database storylines become more interesting when multiple objects are used:  in the case below, Alien Allan, Bloody Mary, and Ghostly Gloria have been submitted together.  The algorithm tabulates a number of related events as shown on the left.  “Supernatural intervention” and “dismembered body” seem fairly important when the three objects are handled together, which to me from the standpoint of possible storylines seem interesting. 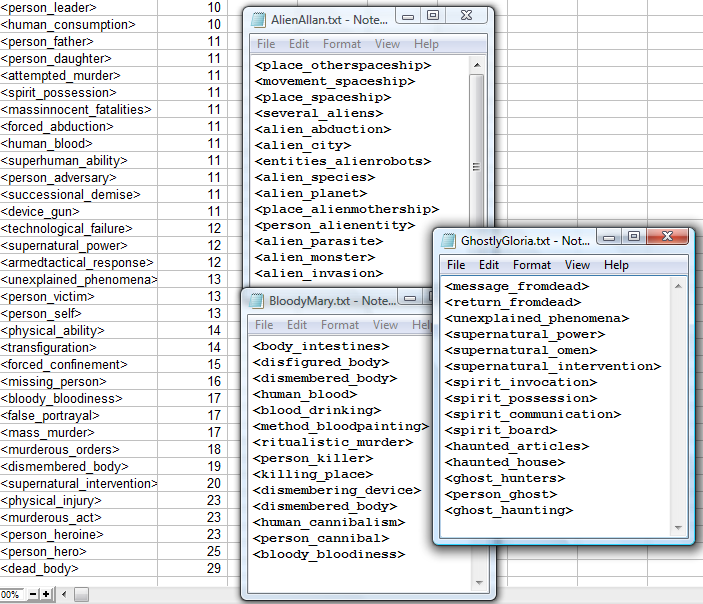 Now, the actual purpose of this algorithm as per my original design is to accommodate a sophisticated persona containing a number of distinct personalities.  An independent contractor might nonetheless be a child molester who might also frequent local art galleries.  An attempt to pigeon-hole the suspect - that is to say, concentrate only on those socially-constructed aspects that are immediately perceived to be threatening - is problematic since he or she might be actively posing a multifarious persona.

In light of the potential separation of identities, how does one go about locating an “individual?”  It is possible to sift through cases systematically without necessarily being limited to a single-aspect persona.  The algorithm will show what cases seem to share in common.  If a number of cases are from the same geographic area, the fact that the “people” involved seem to have different personalities does not negate the possibility that they might in fact be the same person merely presenting different aspects.

Instead of using simple thematic elements as shown above (e.g. Bloody Mary), I would make use of formal conceptual models such as “spirit objects” from my “Animal Spirit Model.”  There can be a body of thematic elements for every aspect of a person such as his or her treatment of elderly people and children.  Indeed, over the life of an individual such as a convicted sexual predator, it might be possible to accumulate an extensive array of personal identities.

Although it might be possible to hold the identity aspects of criminals, it is important to recognize the broader implications of using parallel narrative objects - objects invoked in parallel to the objects submitted.  Rather than using this system focusing on the person, actually its greater strength is probably on the study of the person’s social habitat.  We could for example construct standardized or anchored persona specifically to examine the changing complexion of the surrounding cases over different time periods.  In the case of teenage suicide, we can extract metrics relating to how these victims interact with the surrounding community and study how these interactions seem related to the social crisis.

My vision on the use of this methodology is that it should represent a continuous process designed to assess - in non-financial terms - the impacts of programs and policy-decisions.  It can be important sometimes to determine how the money affects the narrative rather than other way around.  Clearly my approach is fairly non-relational - that is to say, it doesn’t make use of a relational database.  Then there are issues relating to ontology and the design of enabling models.  Yet it is a simple and straightforward approach without, in my opinion, much complicated programming.  However, it is important to really “think about” what makes a person a person, a scene a scene, and the potential connections between phenomena that might not necessarily be statistical but rather structural.  I have periodically described myself as a theoretical ontologist.  This is the sort of computer application that I find engaging.