This article comes from the blog of the website KNIME. Below is a summary. The highest reduction ratio without performance degradation is obtained by analyzing the decision cuts in many random forests (Random Forests/Ensemble Trees). However, even just counting the number of missing values, measuring the column variance, and measuring the correlation of pairs of columns can lead to a satisfactory reduction rate while keeping performance unaltered with respect to the baseline models.

The recent explosion of data set size, in number of records and attributes, has triggered the development of a number of big data platforms as well as parallel data analytics algorithms. At the same time though, it has pushed for usage of data dimensionality reduction procedures. Indeed, more is not always better. Large amounts of data might sometimes produce worse performances in data analytics applications.

One of my most recent projects happened to be about churn prediction and to use the 2009 KDD Challenge large data set. The particularity of this data set consists of its very high dimensionality with 15K data columns. Most data mining algorithms are column-wise implemented, which makes them slower and slower on a growing number of data columns. The first milestone of the project was then to reduce the number of columns in the data set and lose the smallest amount of information possible at the same time. 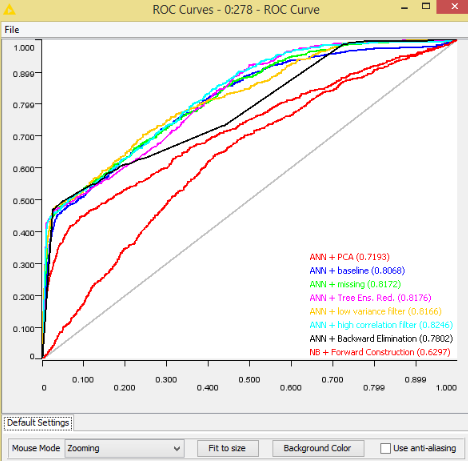 ROC curves are used to measure performance of various techniques

Using the project as an excuse, we started exploring the state-of-the-art on dimensionality reduction techniques currently available and accepted in the data analytics landscape.

To read more, click here. More about data reduction can be found here.

PCA is invertible, since it is just a linear translate+rotate matrix. You can apply PCA, fix the final N columns at their mean, and then invert the altered vectors back to the original subspace. This will give your original data somewhat denoised. This may help with interpreting the original features.