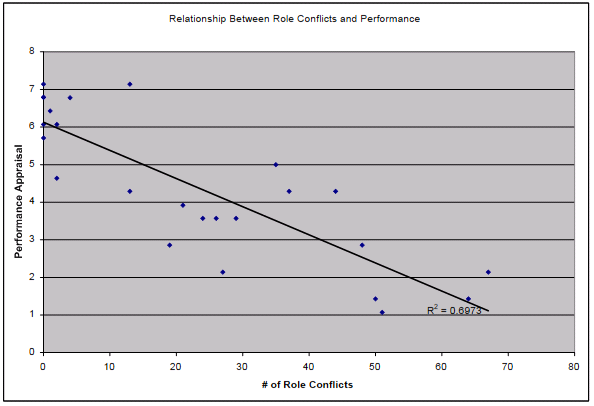 Performance can be expressed empirically - as in the case above using a formal scoring scheme.  On the other hand, a qualitative approach can be used: using this alternate methodology, apart from performance being lower, it should be apparent that there is also a noticeable level of deviant behaviour associated with role conflicts. 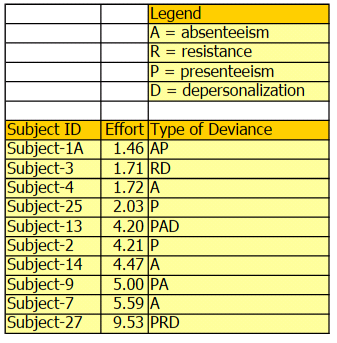 There are a number of deviant aspects I left out of the table only because they require preamble to explain: e.g. instrumentalism involves the exploitation of clients for self-serving purposes.

Going further with this analysis, consider how an employee might position him or herself in relation to clients and other coworkers in order to mask the deviance.  How does one attempt to conceal something inappropriate to maintain the relationship?  I have been carrying out research in this area considering theories pertaining to acting, spirit possession, and brain adaptations.

For maximizing performance, human resources can attempt to screen for risk of role conflict.  I developed an algorithm to count up the potential role conflicts.  It is necessary to have an understanding of role characterization to facilitate the necessary analysis.

Minimizing deviance on the other hand is a separate issue; this necessitates additional research.  The impacts might begin as an issue for human resources and then enter into the sphere of mental disorders and criminal behaviours.