These two results should be compared and contrasted with those published here (based on a different methodology) and the reader is invited to explain the discrepancy.. Note that an eclipse occurs when the Sun, Earth, and Moon are aligned. If the Moon is between the Sun and the Earth, it is called a solar eclipse. If the Earth is between the Sun and the Moon, it is called a lunar eclipse. 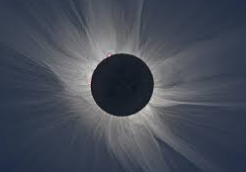 This article is great material to interest high school students in science, allowing them to work on an applied, fun real-life math problem. Some techniques to predict eclipses use linear regression or interpolation, but here we just use basic maths.

Alignment occurs only if Moon(t) = (1-a) Sun(t) + a Earth(t) where a is a number between 0 and 1: in that case, we are dealing with a solar eclipse. If a > 1, we are dealing with a lunar eclipse.  This provides a system with two equations (one for each coordinate) with two variables: a, and t (the time when the eclipse occurs.) As we will see, infinitely many values of t satisfy the equations, and these values are about 29 days apart (when a < 1) on average.

It is straightforward to obtain

where tang represents the tangent function (sine divided by cosine.) This happens only if

Using the correct values for r, R, v, and V, one finds that eclipses occur at t = k * 14.8 days, where k is any integer (positive or negative.) Also, solar and lunar eclipses alternate. This is very different from what is happening in the real world. Eclipses seem to be much less frequent. The reader is invited to explain the discrepancy. Of course, the model used here is too rudimentary, yet it seems very intuitive. Using discs rather than points, for celestial bodies, makes the equations more complicated, though the problem can also be solved using Monte-Carlo simulations.

Probably the reason why this model produces too many eclipses is because it is based on a 2-dimensional representation of the solar system. Celestial bodies may appear aligned when projected on a 2-dimensional plane, when in reality (in 3 dimensions) they are not. This is a typical issue  arising when performing data reduction. In some ways, the eclipses produced by this simplistic model represent the maximum number of potential eclipses.

This exercise also proves that the orbits of the Moon around Earth, and Earth around the Sun, are in two different planes. This is caused by Earth's inclination (axial tilt.)