I routinely study differences in production between years by charting the data on the same graph. I consider this a popular approach. It makes sense since there is often interest on how the year is shaping up compared to previous years. Moreover, seasonality would be less relevant given that the same seasons are compared between years (assuming the seasons reoccur at around the same time). Below I present some real data from an organization in 1983 comparing production to 1982. I think many would agree that there are some seasonal similarities albeit weak. 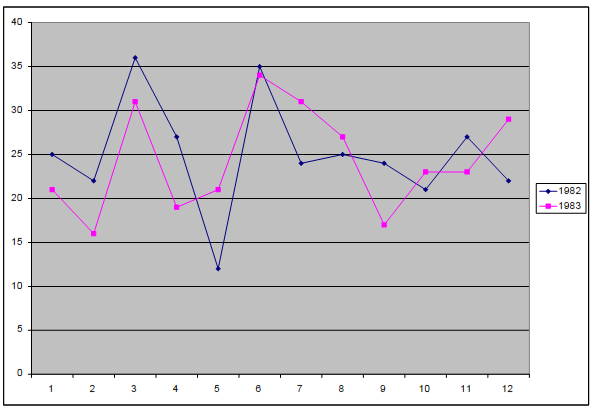 The records suggest that the organization's role developed over time; however, it is reasonably to say that it provided professional consultation services over a number of decades. All things considered, it kept reasonably good data. I obtained access to this data under what we in Canada call a "freedom of information" request. The organization assisted employees experiencing workplace stress and burnout issues; those dealing with alcoholism and drug addiction; difficulties that can impair their ability to work. The y-axis represents the number of new cases while the x-axis is the month. This makes the next chart really interesting since it presents more than 10 years of monthly data from the same company. 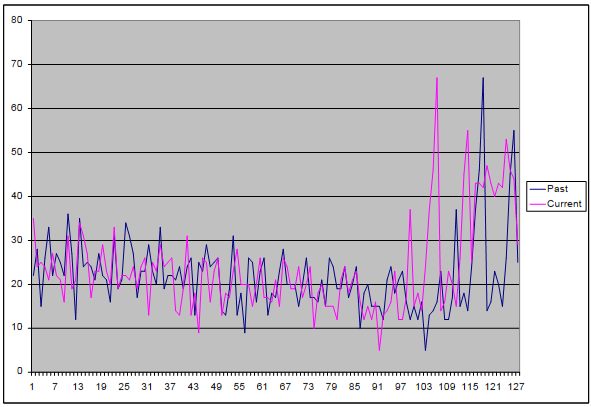 I am unsure if an untrained eye would necessarily notice, but something of a "seasonal disturbance" occurred around the 97th month after many years of gradual decline. This is a condition of tremendous distress in terms of the organization's client base. The same way splicing the data year-over-year can offset the impacts of seasonality, the "cumulative differential" of the spliced data can help to bring out persistent non-seasonal behaviour. The cumulative differential can respond to the following question: "What's the difference in production between this year and last year?" If it is 1,000 units, the cumulative differential would be at 1,000. It therefore serves a fairly useful purpose although at the moment I don't recall many organizations using it. In any event, the next chart shows the cumulative differential for the data presented above. 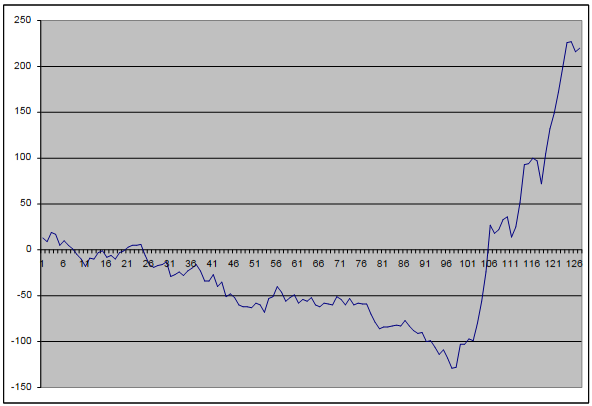 This chart is much less confusing. So as I was saying, something "out of the ordinary" happened at around the 97th month after years of gradual decline. I see possibly three major waves of disruption. Personally, I believe these are waves of employee layoffs. We can see that the organization's business didn't decline after each wave but actually spiked. Presumably the employees that managed to keep their jobs were fearful of further layoffs, which brought about a greater need for counselling. Interesting or what?

So that is the technique in a nutshell and how it is applied to real data. Different metrics can be used and along with different thresholds to warn of activity that is out of the ordinary. I would like to point out that the exact temporal splicing is important. In the case of this organization with monthly data, it is reasonably to compare month-to-month differences in order to offset seasonality. If a factory process is involved, this sort of seasonality wouldn't be an issue. Instead, the focus might be on the sampling: e.g. a fractal splice of 1/2, 1/3, 1/4, 1/5 and so forth might be used to assess normalcy.