My blog “Blockchain + Analytics: Enabling Smart IOT” drew some great feedback asking me to clarify my autonomous vehicle example that used blockchain as a means of near real-time, peer-to-peer communications between clusters of intelligent devices and machines.  But first, some background.

Edge analytics within an Internet of Things (IOT) world is very different than traditional big data analytics because it required the ability to stream and analyze massive amounts of real-time data, much of which never changes substantially, outside the confines of the data center or the cloud. The edge enables new monetization opportunities with the ability to capture, analyze and action upon real-time data streaming off the plethora of interconnected devices that comprise an “smart” space such as a factory, hospital, store, stadium, university, mall, home or theme park (see Figure 1). 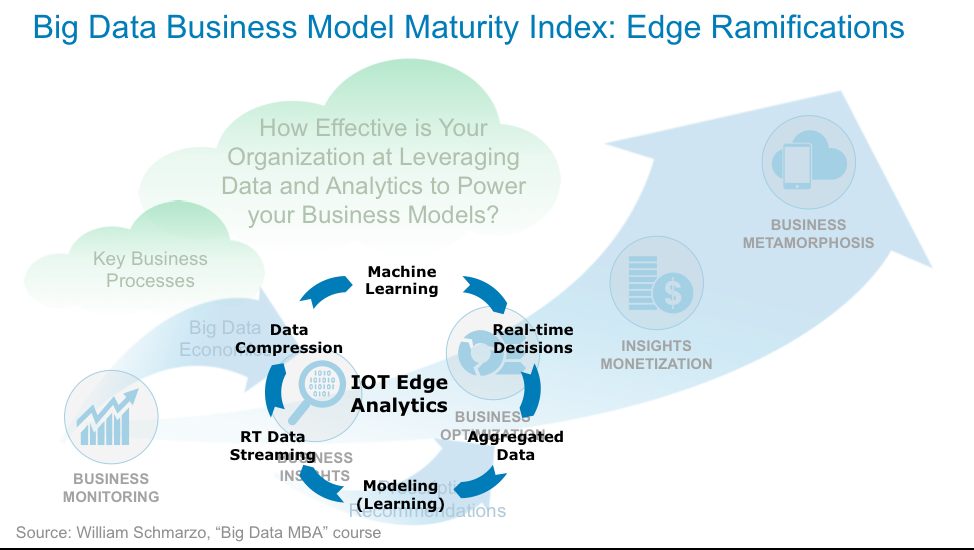 Figure 1:  Monetizing Data and Analytics at the IOT Edge

To support these new monetization opportunities, I introduced the IoT Tiered Analytics Architecture in the blog “Monetizing the Internet of Things (IoT)”. The analytics being performed at the different IoT tiers include (see Figure 2): 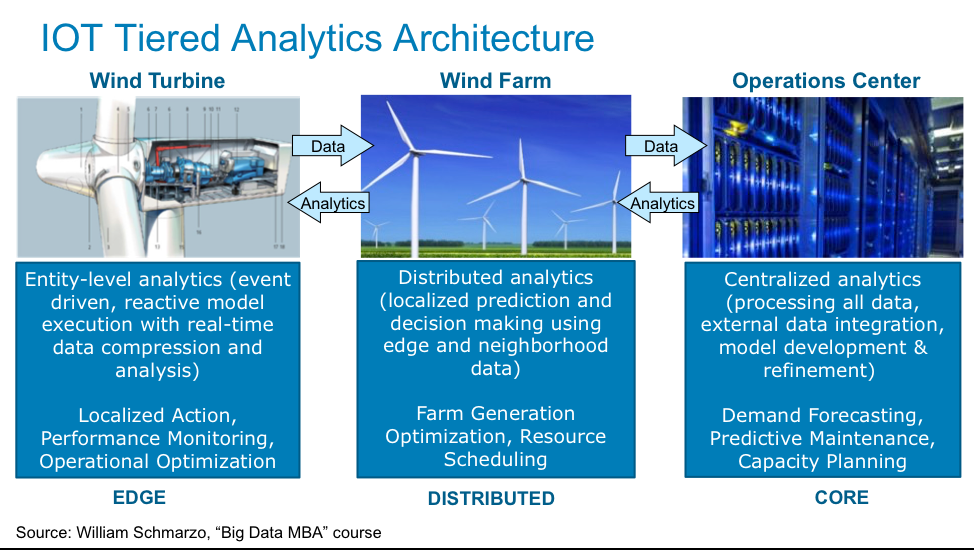 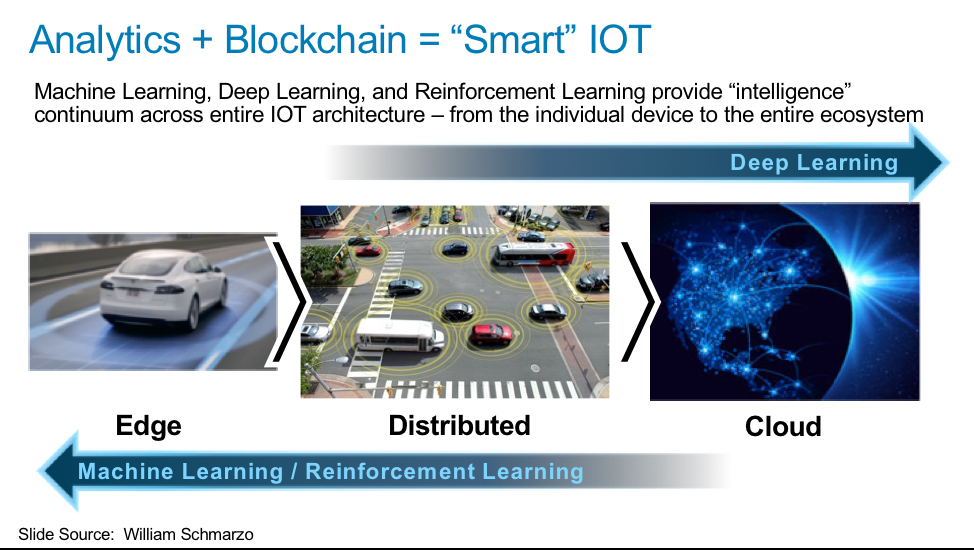 The paragraph that drew the most discussion was the following:

“Autonomous cars are racing down the highway at speeds exceeding 100 MPH when suddenly a car a half-mile ahead blows out a tire sending dangerous debris across 3 lanes of traffic.  Instead of relying upon sending this urgent, time-critical distress information to the world via the cloud, the cars on that particular section of the highway use peer-to-peer, immutable communications to inform all vehicles in the area of the danger so that they can slow down and move to unobstructed lanes (while also sending a message to the nearest highway maintenance robots to remove the debris).”

Below is the scenario for which I was contemplating the need for an open peer-to-peer communications capability - like blockchain - to facilitate "conversations" or the sharing of data and information between clusters (swarms[1]?) of smart devices (see Figure 4). 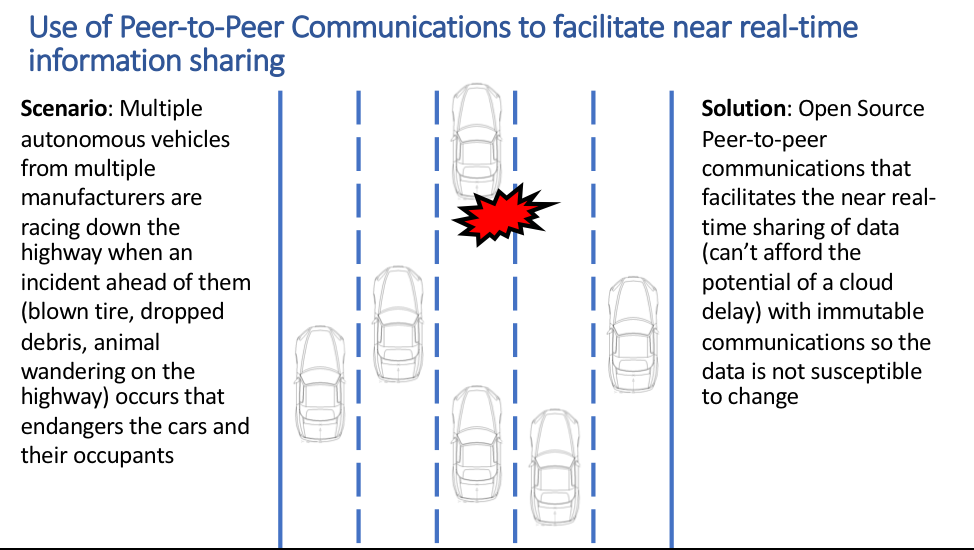 And the information that could be shared in the real-time conversations between the autonomous vehicles might go beyond just potential dangers in the road ahead, and could include information such as road conditions (potholes, emergency road maintenance, slow machinery on the roads), real-time traffic routing optimization, or even recommended restaurants, coffee shops and hotels near the highway.  Heck, a marketplace could be created that rewards entities for sharing accurate and relevant data (enabled via Bitcoin?).

Am I Looking too Far Into the Future?

I have also gotten feedback about the economic infeasibility of using blockchain as this peer-to-peer network.  But betting against the drop in costs and increases in storage and compute at the edge might be the wrong bet.  Could the combination of blockchain and the increasing computational power at the edge not only make blockchain suitable for these types of IoT situations, but also create virtual cloud environments that make today’s dominate cloud players irrelevant?

Disruption happens when no one is looking; when a technology that we have taken as an absolute (like the cloud) gets blindsided by a new technology. That’s when billionaires get created. 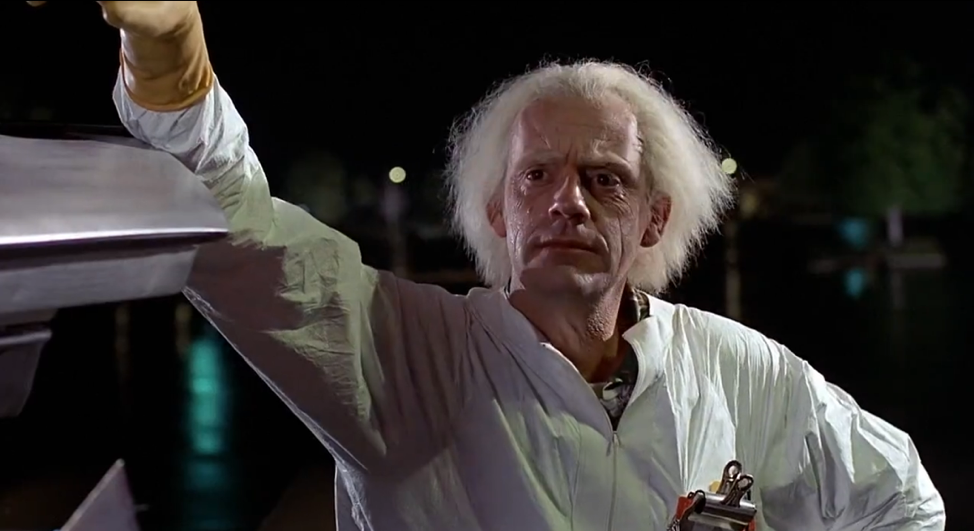 [1]Swarms are independent, heterogeneous, connected IoT devices that can cooperat.... Yes, basically the end of the world as we know it.