If you are confused about the difference between probability, chance, and odds, you're not alone. In their paper Confusion Between Odds and Probability, a Pandemic?[1] , Fulton et al. surveyed eight online dictionaries (including Cambridge,  Macmillan, and Merriam-Webster), and found that while they all defined probability in a similar way, all eight gave "inconsistent and computationally different definitions of the term odds."

The question is, does it really matter if you use the correct definition? Or is it just enough to get your point across (as long as you do the math right)? It can be of vital importance to get the terminology right, especially if you're working in areas with significant monetary or social responsibilities. But in most cases, no one will be able to tell the difference and--unless you're publishing your work-- it's highly unlikely you'll be called out for making the wrong choice.

If you do work in a field where it's important to be precise, or you just want to clarify their definitions for your own purposes, here are short definitions of the three terms:

The following picture clarifies the difference between probability and odds, using an American roulette wheel with 18 black spaces, 18 red spaces, and 2 green (0 and 00 pockets): 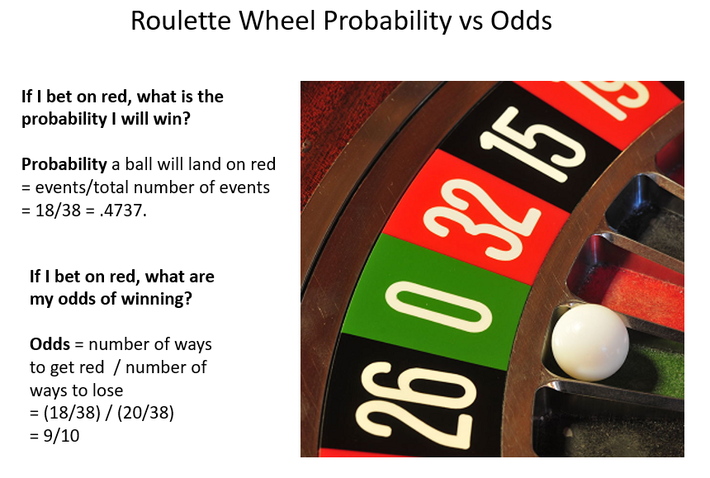 While these aren't comprehensive, probability can be expressed in various ways, and knowing the distinctions between these ways can lend you more credibility when talking with stakeholders or audiences. This is also critical when gathering this type of information, as consistency in usage makes analyzing trends possible in the first place.

[1] Fulton et al. Confusion Between Odds and Probability, a Pandemic?

[2] Boston University. The Difference Between "Probability" and "Odds"