In my last blog, I explained my “Animal Spirit Model,” which I used to consider Paddock the Vegas shooter and the fictitious character Jack Torrance (played by Jack Nicholson) in the 1980 horror movie “The Shining.”  In this blog, I will be considering the character of Mrs. Torrance - Jack’s wife (played by Shelley Duvall).  Below I present the computer generated description for Mrs. Torrance followed by her animal spirit on Excel.  The descriptor program responds to the settings on the spreadsheet, allowing me to gain a “plain language” explanation of the character.

About Mrs. Torrance:  “This is a victim (target of violence lacking control).  This character is highly submissive (doesn't impose).  Important aspects include the following: this character is notably adrift (goes with the flow); somewhat dismissive (doesn't attach much value to details); insensitive (does not perceive or attach relevance); notably spontaneous (doesn't deliberate much before doing); and somewhat vindictive inside (hides a desire to exact justice).” 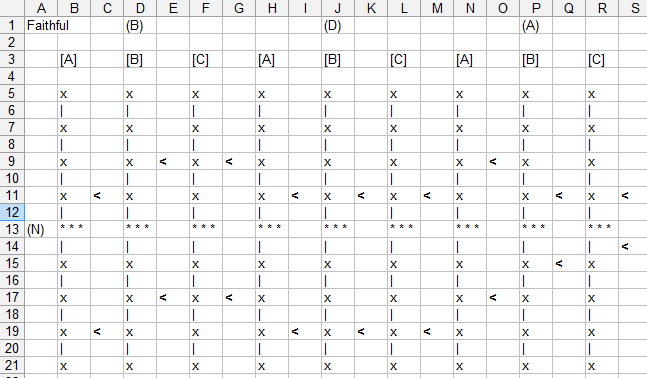 Linking the English language to a data object derived from an elaborate conceptual model is no simple matter.  I found myself repeatedly asking, “How a psychological predisposition such as this might be described in ordinary English?”  This is when a person really learns about the applicability of the model to real-life situations.  I have to determine not just the meaning of terms such as “submissive”; it is necessary to confirm that the model actually conveys the meaning in the intended manner.  Below is the coding that I generated from the animal spirit:  this is the coding that is present in the database to describe the character.

I discovered however that the animal spirit as it appears on the Excel table is actually much more accurate than either the plain-language rendering or quantitative evaluation.  It might actually exceed the capabilities of the English language to express - the same way time-travel scenarios might be difficult to explain using the Mandarin language.  It occurred to me that nothing is really more accurate than the data object except perhaps the conceptual model from which the data object extends.  However, to “think” in model terms requires the development of supporting intellectual capital; this represents a real investment.  I would be wasting my time if I didn’t intend to make extensive use of the data object.

Something interesting happened as I started making use of the model.  This is practically paranormal.  I started to deliberate about situations in relation to the model.  I began dreaming in terms that to me were alien and therefore unfamiliar.  My brain seemed to be adapting itself to a different language - giving rise to some fairly peculiar dreams.  The human mind is limited to some extent by the boundaries of its languages.  An elaborate data object might function like a language that doesn’t exist - compelling the brain to provide a hospitable setting.  Within that setting, it becomes clear how limited both human language and numbers are, how our existence and ability to perceive existence are bound to our linguistic and mathematical roots.