Amongst those, it is the plot of the movie Cast Away, with Tom Hanks: if that situation happens in real life, then there is at least one person who is inaccessible to human kind as a whole for that amount of time.

Situations that are far more common, such as an undiscovered isolated tribe, a person who gets stuck in an elevator that is abandoned by mistake, or a town whose telephonic lines go down for a certain period of time are suitable counter-examples to the most popular scientific theory of all times.

This theory, says Doctor Pinheiro, originates in the research of Doctor Milgram, who was an idealist: "one of the most famous studies of obedience in Psychology was carried out by Stanley Milgram, a psychologist at Yale University. He conducted an experiment focusing on the conflict between obedience to authority and personal conscience." - source.

It is circa 1963 when Doctor Milgram investigates acts of genocide from the WWII. People often heard those who killed others justifying their acts by saying 'that they were just following orders from their superiors'. - source

"In the “lost letter” experiment, he (Milgram) attempted to assess community outlooks on certain institutions, some political in nature, based on the rate at which people who found lost letters addressed to the particular institutions put the letters in the mail. The “small world” experiment aimed to determine the probability that two individuals (chosen at random) would know one another" - source.

This is the experiment that would later on be associated with the name Six Degrees because of the work of Doctor Watts (Sociologist), and Doctor Strogatz (Statisticiann) in the year of 1998.

Doctor Pinheiro had, as hobby, acting, so that she was also a professional actress, and she never worked in any production that involved Kevin Bacon or Tom Cruise, probably the most popular Hollywoodians ever, or amongst those.

In this case, there is an infinity of degrees of separation, not only six, between Doctor Pinheiro, and Kevin Bacon in the online game that made of Kevin Bacon an even greater icon, Kevin.

The own Milgram proved that his theory only worked in very special cases, which Watts, Strogatz, Comellas, and his group decided to call Small Worlds.

In 296 chains, Milgram, so these are events that happened circa 1963, got 64 confirmations, and 232 rejections of the six-degree theory of the famous play writer, Mr. John Guare.

Since he set this theory, thanks to the average degree of connections inside of the personal social networks of the 64 people who determine the Comellas' Circulants that presented a maximum value of six for their diameters, whilst Milgram's presented an average of 5.2, the 64 successful networks, at least two people attempted to prove it in a mathematical way (Ithiel de Sola Pool, and Manfred Kochen IBM), according to source. 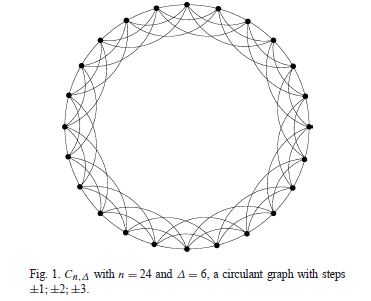 Doctor Pinheiro, through Mathematics as well, has finally put a rock over the issue: in human societies, the 6-degree theory is an illusion (statistically proven in practice by the own Milgram to be an illusion, 64 over 296, mathematically proven by Doctor Pinheiro to be an impossibility - always someone in isolation of some sort, impossibility connected to the nature of the network being considered, so telephonic, communicative, physical, or another). Doctor Pinheiro also came up with a better model to describe human networks of the type Linkedin or Disease Spread, and that is the Starant Model, and therefore not Comellas' Circulant for at least those (so) special cases, but a superposition of graphs: his circulants plus star graphs.