This article was written by Ryan Grim. Ryan is the Washington bureau chief for The Huffington Post and an MSNBC contributor. He is a former staff reporter with Politico.com and Washington City Paper, as well as the author of the book "This Is Your Country on Drugs". Nate Silver is a famous statistician, founder and editor in chief of FiveThirtyEight. Some of the arguments in this article are about the type of regression being used. 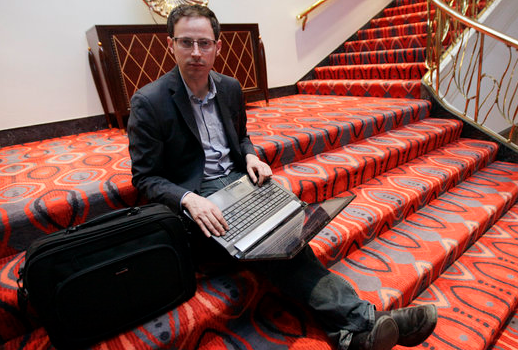 During the 2012 election, Republicans who hated the daily onslaught of polling showing that Mitt Romney was headed toward a comfortable defeat turned to Dean Chambers, the man who launched the website Unskewed Polls. The poll numbers were wrong, he said, and by tweaking a few things, he could give a more accurate count. His final projection had Romney winning close to all 50 states.

Chambers has wisely abandoned the field of election forecasting, and this year says he thinks the various models predicting a Hillary Clinton victory are probably accurate. The models themselves are pretty confident. HuffPost Pollster is giving Clinton a 98 percent chance of winning, and The New York Times’ model at The Upshot puts her chances at 85 percent.

There is one outlier, however, that is causing waves of panic among Democrats around the country, and injecting Trump backers with the hope that their guy might pull this thing off after all. Nate Silver’s 538 model is giving Donald Trump a heart-stopping 35 percent chance of winning as of this weekend.

He ratcheted the panic up to 11 on Friday with his latest forecast, tweeting out, “Trump is about 3 points behind Clinton ― and 3-point polling errors happen pretty often.”

The beauty here is that we won’t have to wait long to find out. But let’s lay out now why we think we’re right and 538 is wrong. Or, at least, why they’re doing it wrong.

The short version is that Silver is changing the results of polls to fit where he thinks the polls truly are, rather than simply entering the poll numbers into his model and crunching them.

Silver calls this unskewing a “trend line adjustment.” He compares a poll to previous polls conducted by the same polling firm, makes a series of assumptions, runs a regression analysis, and gets a new poll number. That’s the number he sticks in his model ― not the original number.

He may end up being right, but he’s just guessing. A “trend line adjustment” is merely political punditry dressed up as sophisticated mathematical modeling.

Guess who benefits from the unskewing?

By the time he’s done adjusting the “trend line,” Clinton has lost 0.2 points and Trump has gained 1.7 points. An adjustment of below 2 points may not seem like much, but it’s enough to throw off his entire forecast, taking a comfortable 4.6 point Clinton lead and making it look like a nail-biter.

It’s enough to close the gap between the two candidates to below 3 points, which allows Silver to say that it’s now anybody’s ballgame, because “3-point polling errors happen pretty often.”

I'm afraid, like so many others, "the great one" missed it based upon his statistical modeling.  I agree with Jake Drew about the lack of random sampling.  Too much cheery picking of data makes for a poor forecast!

Comment by Jake Drew Ph.D. on November 10, 2016 at 8:33am
What was striking to me was in looking at all the general election polls on realclearpolitics.com. These were almost all +-4 with 95% confidence. I repeatedly saw general election polls that were 12-14 points in opposite directions. For example, LA Times and ABC / NBC general election polls, if I remember correctly. This was a strong indication to me that the samples being taken for some polls must not be truly random.

This is very interesting. Thank you for sharing this Emmanuelle.
"He compares a poll to previous polls conducted by the same polling firm, makes a series of assumptions, runs a regression analysis, and gets a new poll number. That’s the number he sticks in his model ― not the original number." - from what I've recently learned about survey data analysis, it is necessary to clean and transform the data to optimize it for analysis and visualization. Not all the data might be valid!

These elections are more unpredictable than ever before. A poll (no matter how great the analysis) only captures the opinion at one specific time in these 2016 elections, due to high volatility caused by the candidates themselves. It is also possible that Trump voters claim they won't vote or vote for Clinton, as you are supposed to feel ashamed and guilty if admitting you vote for Trump and you are an intellectual. However, good polling strategies should take care of this effect.