In my most recent blog, I discussed the idea of aligning the supply of services to market demand.  My conceptualization of “alignment” specifically relates to time intervals: i.e. having people at the right place and at the right time - for example, to take advantage of opportunities - is a sign of alignment.  Alignment for me is often about the relationship between capacity and incapacity:  the ability to supply services versus the inability to satisfy the market demand for those services.  In this blog I will be considering the interpretation of charts to evaluate the effectiveness of strategic allocation.

Strategic allocation can be portrayed as a management issue that is insulated from externalities and change: i.e. it is conceived and set by management.  People are delegated and in a certain sense controlled to ensure their behaviours conform to the corporate mission or vision.  The metrics of alignment might then be interpreted purely from a compliance standpoint.  A situation that sometimes gets media coverage pertains to executives taking a company down a “new direction.”  The path down the old direction didn’t work out.  Substantially the same mechanism that brought the company to failure might be invoked again although this time on the expectation of completely different outcomes.

Quite the opposite at least from a day-to-day operational standpoint is thought of having the allocation of resources determined by the market itself - and having the company change together with the market.  The metrics of alignment in this latter scenario are dynamic and adaptive; and they represent instruments of discovery as operations gradually change to better serve the market.  Managers are still telling people what to do, of course.  But the analytics are in active radar mode assessing the effectiveness of initiatives.  It is like driving a car sober with eyes open and on the road.  Isn’t this the only way to drive a car?  It should be.  I consider it a monumental shift to move away from “centrally regulated development” to a “market driven” model.

Below I present what I consider to be a dysfunctional situation:  clients are least served while staff is least available.  Some would likely argue that it is perfectly reasonable for clients not to be served when staff is unavailable; however, this isn’t the point at all.  The point rather is as follows:  resources have been allocated in the worst possible way resulting in maximum detrimental impact to clients and operations.  For instance, if large numbers of clients tend to call from 12 to 1:30 PM - and this is precisely when service levels are impaired due to the scheduling of staff - it almost seems like the competition planted an agent in the company to ensure the poorest possible performance. 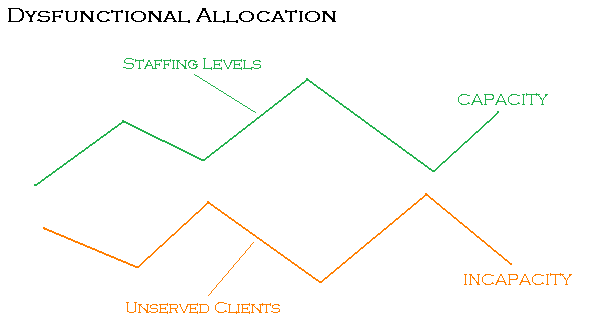 A non-graphical method of carrying out this analysis of course is simply to examine the level correlation on a scattergram.  The problem with this method is that I am not actually trying to determine the correlation per se but rather the changing situation at each time interval: e.g. the correlation might be quite good - except at the time intervals of 1 PM and 4 PM during the last two weeks of July.  The specific details are important.

In contrast, the patterns might exhibit a substantial level of alignment as shown below.  In this case, clients might still be lost at certain points; but if this occurs it is probably due to service inadequacy instead of misalignment.  For example, the strategic placement might be fine although there is insufficient staff; or there is some other kind of obstacle such as a shortage of computer processing capacity during key periods. 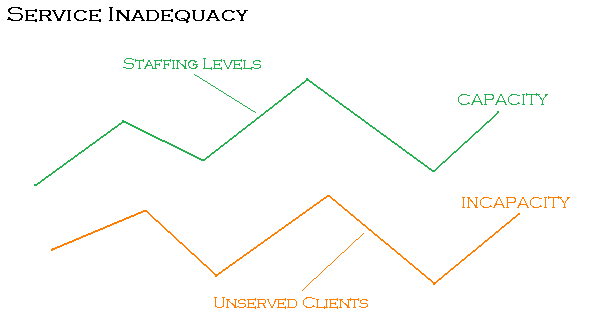 Dealing with lack of proper alignment sounds like a good idea.  But what actually gives rise to changes in alignment?  There is certainly sometimes a need to dynamically “move” staff.  Depending on the work environment, this movement can be made by controlling the workflow - perhaps by adjusting the prioritization scheme thereby causing more work to take place in specific areas of concern.  Alignment can also be altered structurally by making greater use automated systems and artificial intelligence instead of humans especially during periods of shortage.

When alignment is fine but the service level is adequate, one strategy would be to deconstruct and restate the metrics.  Instead of simply considering “staffing levels,” it would be worthwhile to also consider the efficiency and efficacy of individuals.  Improvements to service levels would take longer to achieve compared to simply moving staff; but the benefits would likely persist or become permanent - for the simple reason that the changes are meant to be long-term. 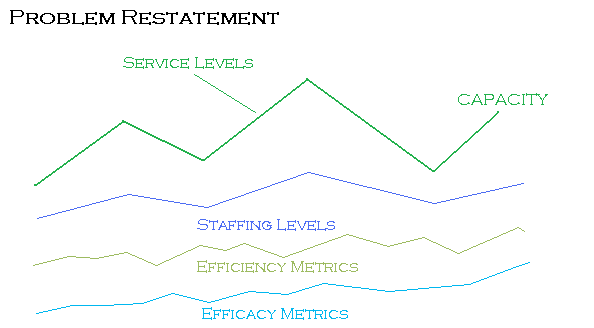 Working towards alignment is a daily activity because the market is in motion; therefore sticking to a general perception or preconception of the market can cause operations to go off course.  The market is moving, but the movements are not random.  There is some fluidity, convection, or repetitiveness in the market data.  Alignment itself is a measurement of efficacy - one that I believe doesn’t get enough attention.  It is a “geographic” metric to some extent since it represents the fitness or appropriateness of placement or positioning.

Not only is alignment affected by the market, the narrative of alignment belongs to the market.  Without alignment, there can still be assertions of efficiency and efficacy; but these metrics need not be connected to the market.  As such, an organization can become disassociated or alienated from the market if it chooses to ignore issues of alignment.  The incapacity to provide service on one hand relates to the services offered by the organization being deficient.  On the other hand, it represents the services desired by the market not being met.  I realize these last two sentences seem almost the same.  The distinction is a matter of emphasis and impetus.  Incapacity can, in relation to the market narrative, be more about estrangement than staffing shortages.

The term “people analytics” is becoming more frequently used among human resources and organization development professionals.  Certain practices such as hiring for “cultural fit” and using sophisticated analytics for recruitment are being promoted.  I want to say first that there is little evidence that such screening mechanisms actually lead to worthwhile outcomes from a performance standpoint - i.e. that the material difference is worth the effort.  Moreover, there is the issue of whether past hiring practices possibly contributed to the company’s current dire situation.  Also, I also want to suggest certain screening methods might be illegal.

True people analytics take place at the operational level - each and every day - using market alignment as the primary reference point.  Consider a statement proposing just the opposite:  “People analytics (absurd statement follows) only takes place at the managerial level - as part of the recruitment process before a person is hired - using specified corporate criteria in the selection.”  This absurdity is likely the norm for some organizations.  Data science is far more useful and necessary in relation to operations.  The strategic positioning of people is part of the alignment process.  Therefore alignment should be about the extent to which this dynamic and adaptive positioning seems to serve the needs of the market, which I want to reiterate is a moving target.

I believe that many organizations understand the need for analytics - but they fail to go that one step further to recognize and embrace the purpose.  Or they select a purpose that at its essence is about imposing a regime of conformity and adherence.  Alignment brings the organization closer to the action - actually making it part of the action rather than a distant observer.  Alignment also helps to ensure that the resources and efforts of the organization remain closely tied to market.  In this blog, I have discussed one level of this "alignment" - the interaction that occurs at the front line.  A deeper form connects the company not to the purchasing decisions of clients but rather the lifelong narratives that bring about the need for interaction and that cause markets to emerge.