In my blog “Making Informed Decisions in Imperfect Situations”, I discussed the importance of properly and objectively framing the decision that we seek to make and how that impacts the data that we gather (and ignore) in an effort to make an informed decision. That is:

Are you trying to gather data to determine the right decisions or are you gathering data to support the decision that you have already made?

In that blog, I introduced two tools that can help us make informed decisions using the best available data, even when that data might be incomplete, conflicting, and/or distorted by others.  The first tool is the Informed Decision-making Framework (special thanks to Erik Burd) and the iterative process outlined in Figure 1. 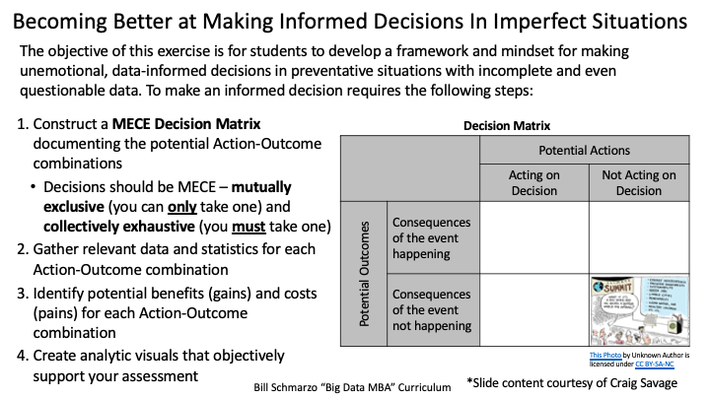 Objectivity is everything.  If you come into this process with your mind already made up about the decision that you want to prove, then you will only find data that support your position and find reason to ignore the data that runs counter to what you already believe. Many folks succumb to this confirmation bias – the tendency to interpret new evidence as confirmation of one's existing beliefs – and only seek data that supports the decision that they have already made.

We can use to help combat decision-making Confirmation using Bias Bayes’ Theorem and Bayesian Inference.

Understanding how to use the Bayes’ Theorem (and Bayesian Inference) to help combat confirmation bias starts with a basic understanding of Conditional Probabilities.

Conditional Probability is a measure of the probability of an event occurring, given that another event has already occurred (Figure 3). 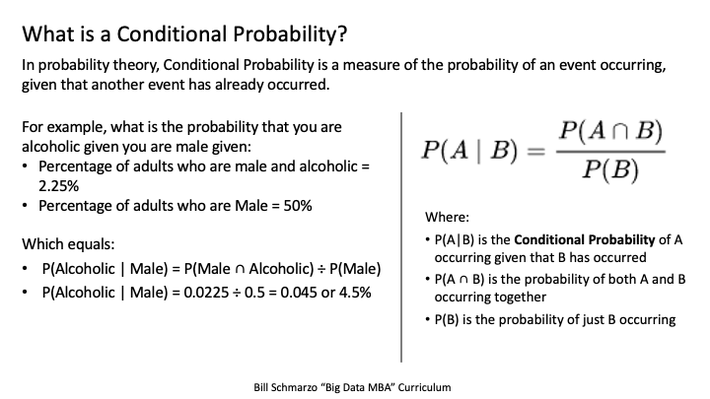 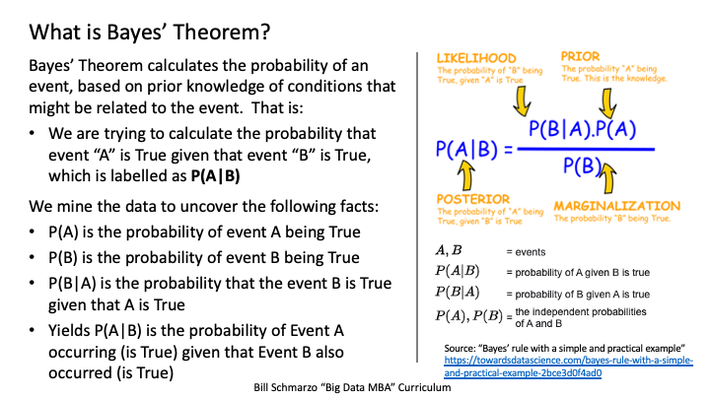 Figure 4:  What is Bayes’ Theorem

For example, if a disease is related to age, then using Bayes' theorem, a person's age can be used to more accurately assess the probability that they have the disease, compared to the assessment of the probability of disease made without knowledge of the person's age. Finally, Bayesian Inference is a method of statistical inference in which the Bayes' theorem is used to update the probability for a hypothesis as more data becomes available.  Bayesian Inference can be used to gradually update the probability of the occurrence of an event as more data is gathered or updated, such as what is happening today with increasing data about COVID.

And that’s where Bayesian Inference can help.  As we get more data, we can revise our probabilities of making the right decision.  Again, that doesn’t guarantee that we’ll get the desired outcome, but we can improve our changes of the desired outcome (surviving a car crash, surviving a bike accident, surviving COVID) by employing Bayesian concepts to factor updated data into our decision-making models.

The ability to update the likelihood of an event occurring is critical in situations where new data is being generated and new insights uncovered. The willingness to ingest new facts, toss out outdated facts, and ignore the droning in our ears people’s distorted version of truth is the key to survival, not only as professionals, but as a species.