This article was posted by Tamis van der Laan. Tamis is a data science and machine learning specialist.

In the past few decades, computer systems have achieved a whole lot. They have managed to organize and catalog the information produced by our civilization as a whole. They have relieved us from stringent cognitive tasks and increased our productivity significantly. One could say that where the industrial revolution automated labor, the digital revolution has automated cognitive labor. This statement isn’t entirely correct however, if it was we would all be without a job. So what can humans do that machines can’t?

The classic computer system can be seen as a big information switching network that directs information to where it needs to go. A good example of such a system is SAGE, one of the very first and largest computers ever built. The SAGE computer system was built during the cold war for the sole task of integrating all information from radar systems across the United States for defense purposes. The problem was the tracking and identification of airplanes flying over the United States. As nuclear weapons could only be deployed by means of aircraft, there was a need to monitor the entire US airspace for Russian nuclear bombers. The SAGE system integrated the information coming from all radar installations and routed this information to operators that would classify airplanes as hostile or friendly. This information was then passed onto other operators and eventually to the command center, where the decision was made to intercept enemy aircraft using fighters or launch ground to air missile systems. One could argue that SAGE was one of the first big data processing systems ever built. The following video link demonstrates the operations of the SAGE system: 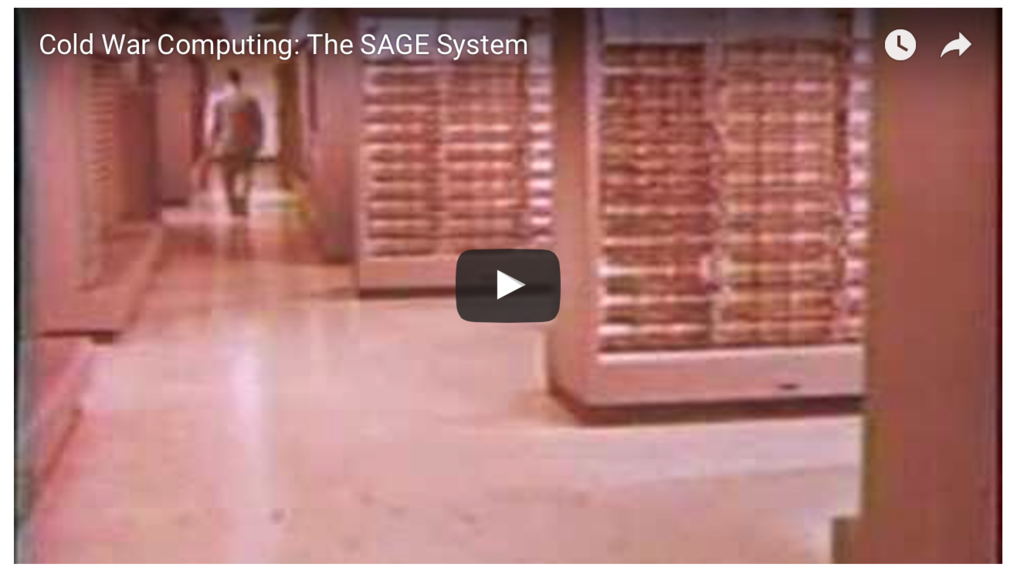 Although impressive, we cannot say the SAGE system was very intelligent. The system would simply route information to operators in an orderly fashion. Because the information was routed automatically to the appropriate workstation labor could be divided between operators and each operators could specialize in there own specific task. Because of this, decisions could be made much faster and enemy airplanes could be intercepted in a timely manner. The system, however, was not intelligent, as it heavily relied on the cognitive abilities of the operators to make complex decisions. It did, however, provide an information routing infrastructure that radically increased the speed of operations. Due to an increase in computational power, computers can now make complex decisions on there own. One thing that still defines them however is that they need to be programmed by hand as to which decision they should make in which situation. One could naively think that with enough programmers and time we can let computers take over all our cognitive tasks. This, however, is not the case, there are applications that simply do not lend themselves to the classic way of programming. A good example of such a problem is face recognition. It turns out that it is very difficult to write a algorithm by hand that recognizes faces.

The problem here is that if you ask someone how they recognizes a face they will simply tell you they don’t know, they just do.

The second problem is that what defines a face is very difficult to describe. One could for example say a face has an oval shape, but describing that shape exactly and all the variance between the shape of peoples faces is extremely difficult, let alone all the shape differences caused by the angle at which a face can be photographed.

The third problem is that things tend to change over time. For example, beards have become more popular in the recent years, which could throw off the system.

In the original article you will learn about: