Time series analysis, especially forecasting, is an important problem of modern predictive analytics. The goal of this study is to consider different aproaches for time series modeling.  For our analysis, we used stores sales historical data from a particular competition “Rossmann Store Sales”. These data represent the sales time series of Rossmann stores. For time series forecasting such approaches as linear models and ARIMA algorithm are widely used. Machine lerning algorithm make it possible to find patterns in the time series. Sometimes we need to forecast not only more probable values of sales but also their distribution. Especially we need it in the risk analysis for assessing different risks related to sales dynamics. In this case, we need to take into account sales distributions and dependencies between sales time series features (e.g. day of week, month, average sales, etc.) and external factors such as promo, distance to competitors, etc. One can consider sales as a stochastic variable with some marginal distributions. If we have sales distribution, we can calculate value at risk (VaR) which is one of risk assessment features. In probabilistic analysis of sales, we can use copulas which allows us to  analyze  the dependence between sales and different factors.  To find distributions of model parameters Bayesian inference approach can be used.

For our analysis, we used stores sales historical data. To compare different forecasting approaches we used two last  months of the historical data as validation data for accuracy scoring using root mean squared error (RMSE). For the comparison, we used the following methods: ARIMA using R package “forecast” [1], linear regression with LASSO regularization using  R package “lars” [2], conditional inference trees with linear regression on the leaf using mob() function from R package “party” [3], gradient boosting XGBoost model using R package “xgboost” [4]. Package  “xgboost”  (short term for eXtreme Gradient Boosting)  is an efficient and scalable implementation of gradient boosting framework [5,6]. The package includes efficient linear model solver and tree learning algorithm. We also used combined approaches such as linear blending ARIMA and gradient boosting model, stacking with the use of linear regression on the first step and gradient boosting on the second step.  We used two ways of classifications – the first way is based on the time series approach and the second one is based on the independent and identically distributed variables. We consider sales in the natural logarithmic scale. Figure 1 shows typical time series of store sales. 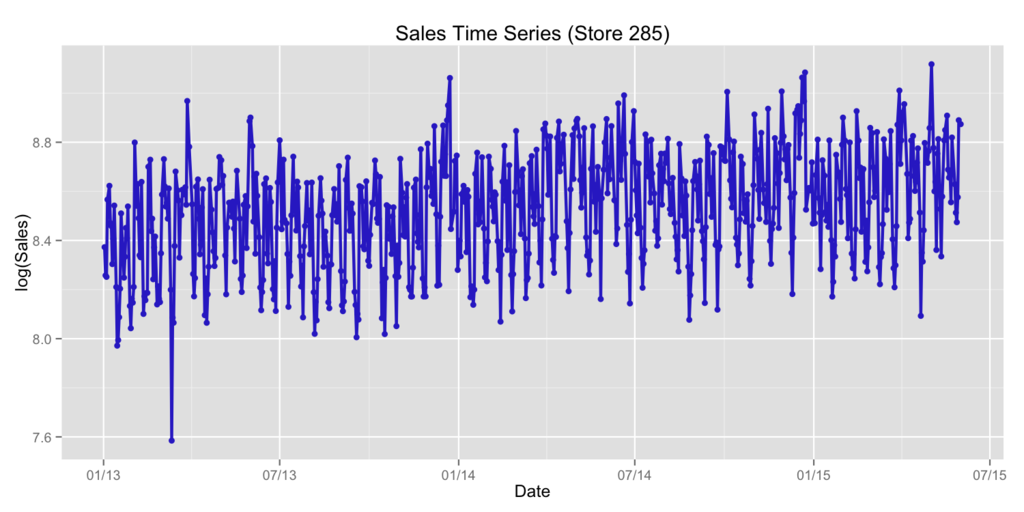 A copula is a multivariate probability distribution for which the marginal probability distribution of each variable is uniform. Copulas are used to describe the dependence between random variables. Sklar's Theorem states that any multivariate joint distribution can be written in terms of univariate marginal distribution functions and a copula, which describes the dependence structure between the variables. The copula contains all information on the dependence structure between the variables, whereas the marginal cumulative distribution functions contain all information on the marginal distributions. For the case study, we use the same sales time series, which represent sales in the stores network. We used “copula” R package [7] for modeling. We consider sales in the natural logarithmic scale. For our analysis, we take such features as sales (variable logSales), previous day sales (variable prevLogSales), number of customers that visited a store (variable Customers). First of all we take one sales time series for one arbitrary store. Marginal distributions and dependencies with correlation coefficient are shown on the figure 3. On the figures 4,5 the pseudo observations of investigated features are shown. These figures represent stochastic dependencies of investigated variable. Our next objective is to find such copulas, which will approximate these dependencies. We chose t-copula for modeling. Using maximum likelihood method, one can find fitting parameters for copula. The probability density function for calculated fitted t-copula is shown on the figure 6. 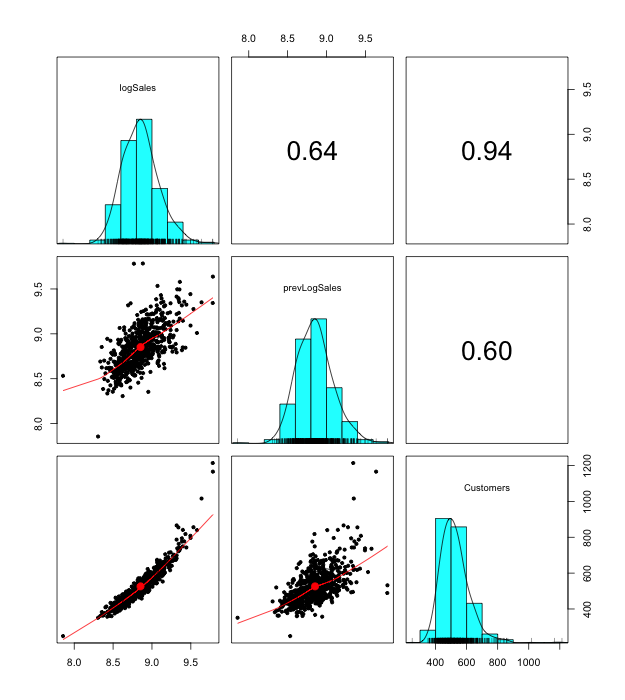 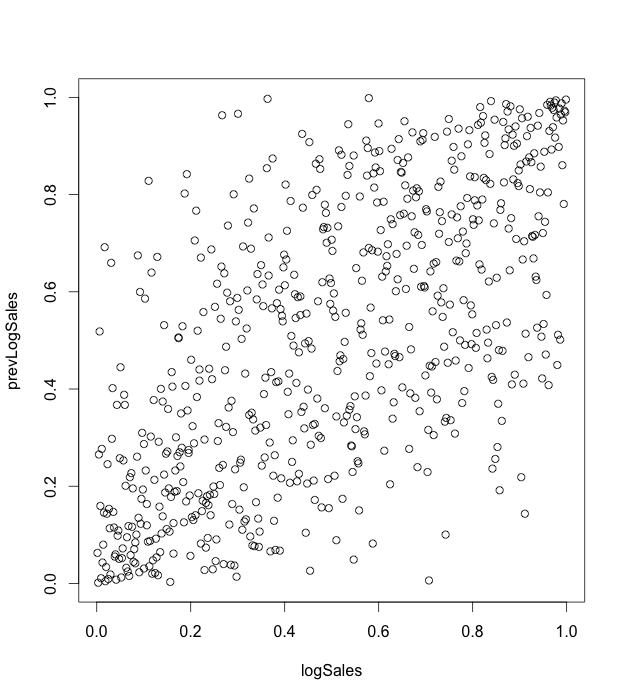 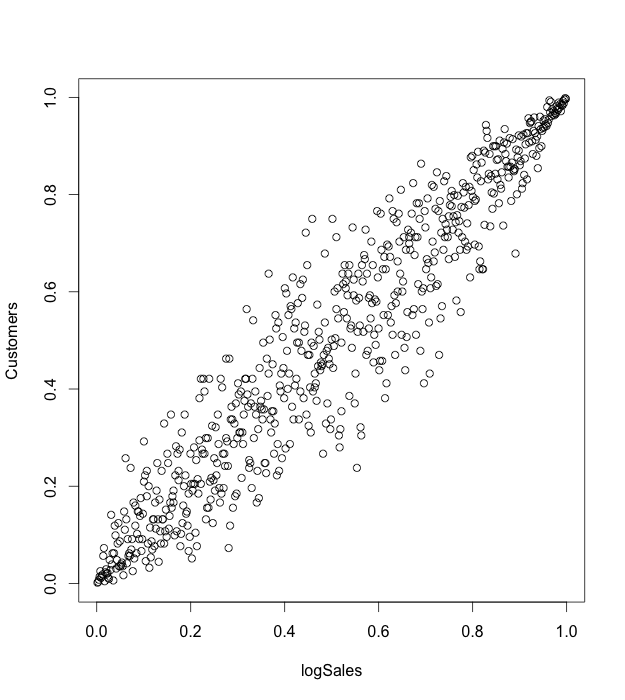 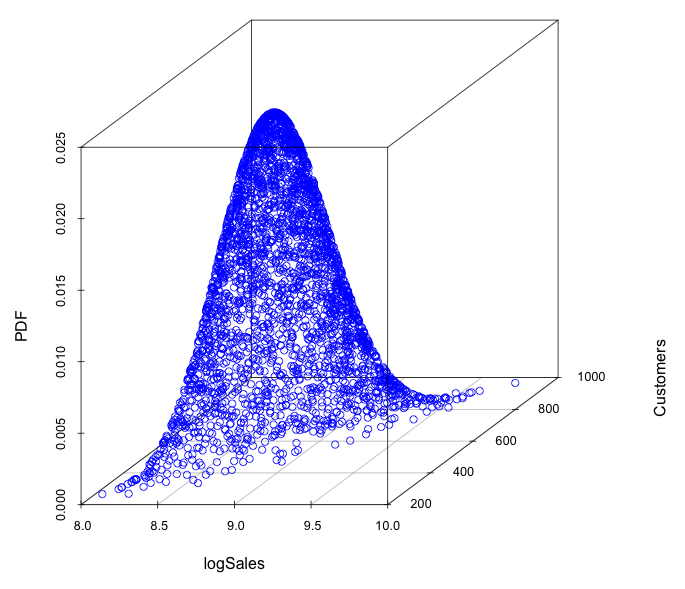 If we need to analyze multivariate dependences with more than two variables, it is effective to use vine copulas, which enable us to construct complex multivariate copula using bivariate ones. For studying vine copula, we used CDVine R package [8]. Let us consider such features of sales time series as sales (variable logSales), mean sales per day for store (variable meanLogSales) and promo action (variable Promo). In this case, we analyze sales for stores chain. To analyze the stochastic dependence we used canonical vine copula. First tree for fitted canonical vine copula with Kendall’s tau values is shown on the figure 8. 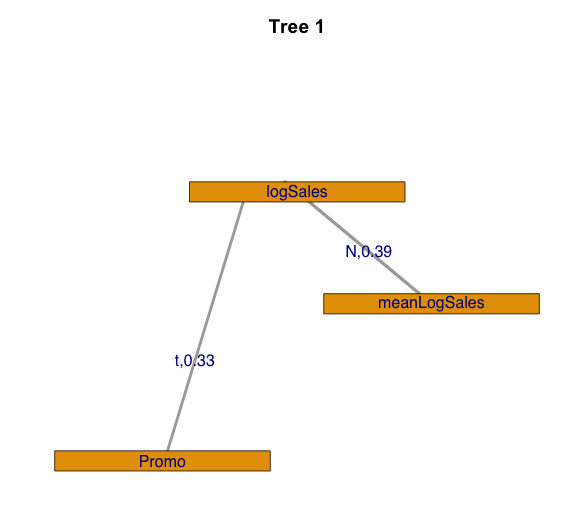 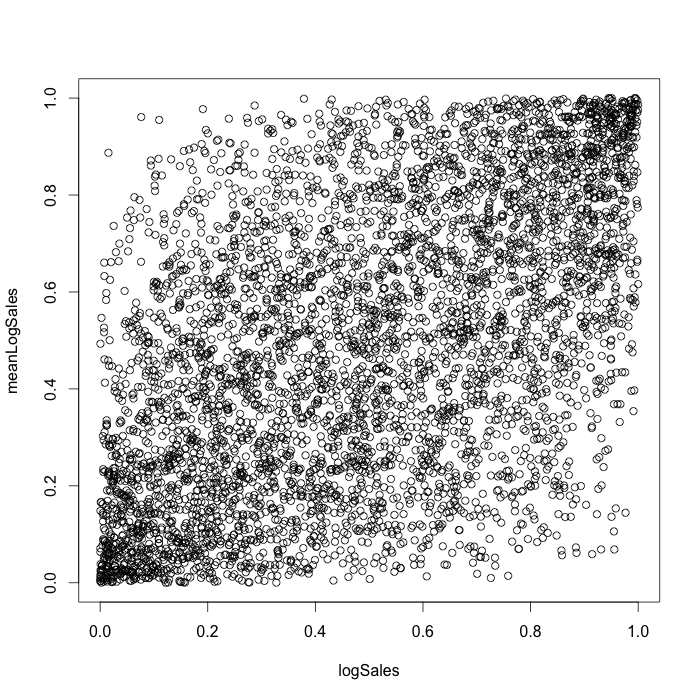 As the case study shows, the use of copula make it possible to model stochastic dependencies between different factors of sales time series separately from their marginal distributions. This can be considered as an additional approach in the sales time series analysis.

For Bayesian inference case study, we take such features as promo, seasonality factors (week day, month day, month of year). As well as in the previous studies, we consider sales in the natural logarithmic scale. As the example we take one sales time series for one arbitrary store. For Bayesian inference, we used Markov Chain Monte Carlo (MCMC) algorithm from MCMCpack R package [9]. For time series modeling, we used the linear regression with Gaussian errors.  Trace plots of samples vs the simulation index can be very useful in assessing convergence. The trace plot for promo coefficient is shown on the figure 10. 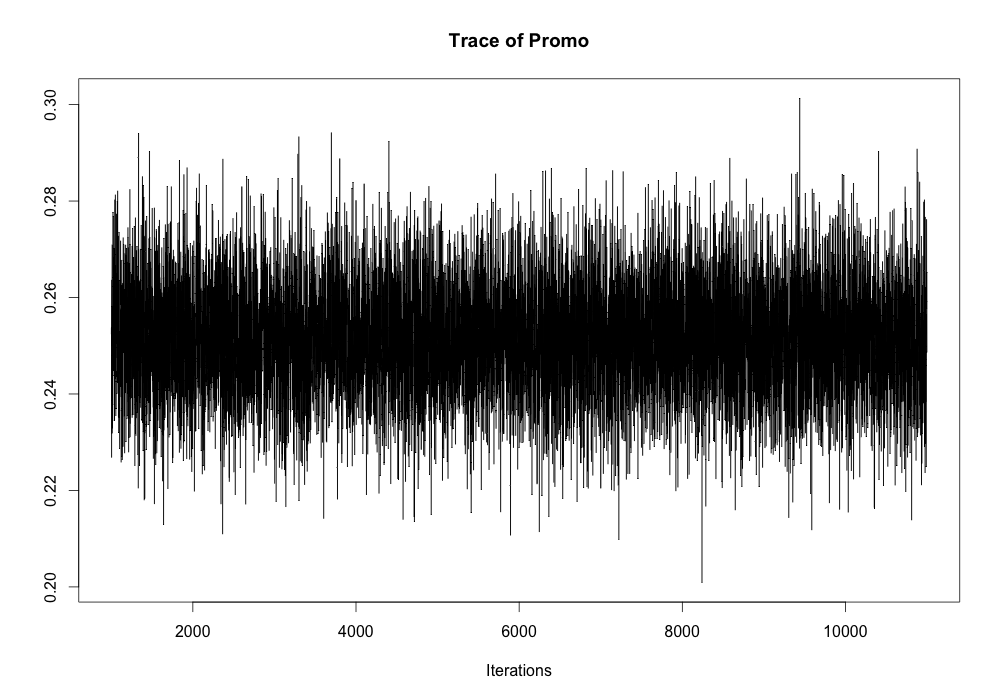 The trace plot demonstrates the stationary process, which means good convergence and   sufficient burn-in period in the MCMC algorithm. The similar trace plots were received for other coefficients in the linear regression. The density of distributions of some regression coefficients for chosen arbitrary store are shown on the figure 11. The figure 12 shows the examples for box plots for some regression coefficients. 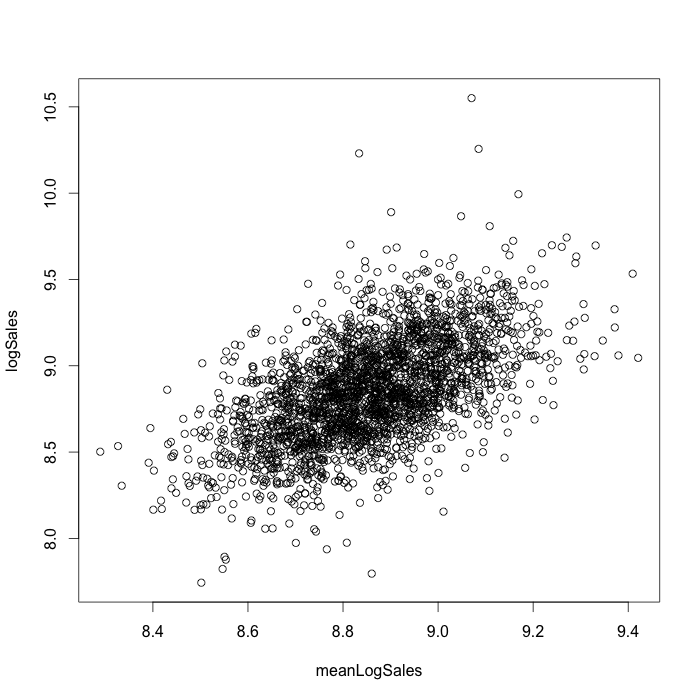 As the case study shows, the use of Bayesian approach allows us to model stochastic dependencies between different factors of sales time series and receive the distributions for model parameters. Such an approach can be useful  for assessing different risks related to sales dynamics. 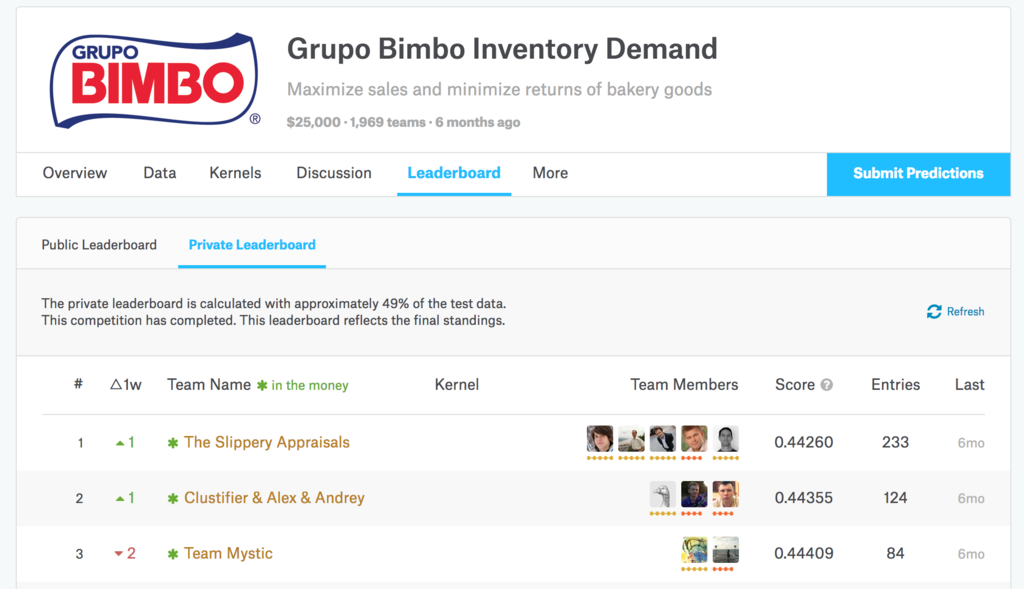 For our soultion we used multilevel model. We built a lot of models on 1st level. The training method of most of 1st level models was XGBoost. For second level we used ExtraTrees classifier, linear model from Python scikit-learn and Neural Networks. The final result is weighted average of these models. The most important features are based on the lags of target variable grouped by factors and their combinations, aggregated features (min, max, mean, sum) of target variable grouped by factors and their combinations, frequency features of factors variables. For our work, we used R environment with Rstudio IDE, and Python with Jupyter. We combined our work on our personal computers with cloud computing on x1.32xlarge Amazon EC2 instance with web interface for access. The following diagram shows our  multilevel model: 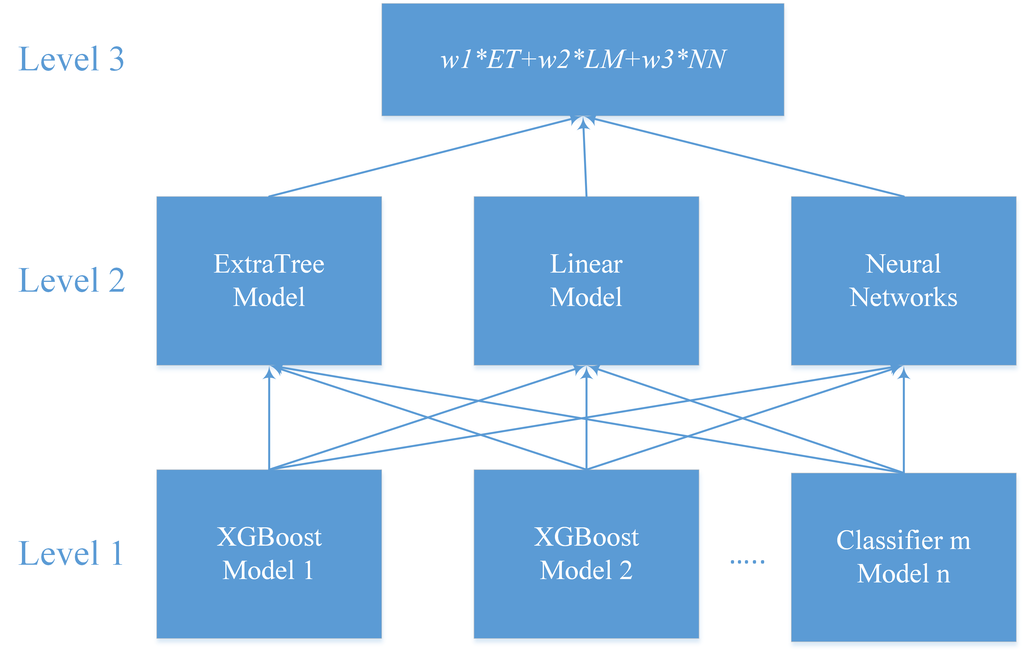 More information about our winner solution can be found here.

In our cases study we showed different approaches for time series modeling. Forecasting with using linear models, ARIMA algorithm, xgboost machine learning algorithm are described. The results of different models combinations are shown. For probabilistic modeling, the approach with using copulas is shown. The Bayesian inference was applied for time series linear regression case. For time series forecasting the different models combinations technics can give better RMSE accuracy comparing to single algorithms. The probabilistic approach for time series modeling is important in the risk assessment problems. The copula approach gives one the ability to model probabilistic dependence between target values and extreme factors which is useful when a target variable has non Gausian probability density function with heavy tails. Bayesian models can be used to find distributions of coefficients in the linear model of time series. Having model parameters distributions one can find the distribution of target values using Monte-Carlo approaches. For each type of time series, one can develop an optimized approach, which can be based on the combination of different predictive models. As the example of the combination of different models, we followed the winner solution for  competition.

Thank you. This is amazingly useful for beginners!

Thanks for the interesting article. I have been working in economics and data science for many years- finally we are getting into  some very practical space for innovating scientific tools into this realm. Many of the tradional tools have been successful  to some degree- but again it has been a humanistic approach of trial and error. Pun intended on that last term! The furture I see with ML applied to Time series is the ability to provide a supervised approach using an ensemble based set of tools placed within a deep learning environment. Yet each and every iteration is a new frontier in best estimate and errors. I do like the fact that ML can use the supervised memory of the past- but also when approaching a transfer functional aspect in which the future becomes chaotic- one can design Time series with the unsupervised power of expanded ML into the present to expand the supervised of the past. I find that we are very early in a massive new frontier for time series estimation.