Summary:  Based on a McKinsey study we reported that 47% of companies had at least one AI/ML implementation in place.  Looking back at the data and the dominance of RPA as the most widely reported instance makes us think that the number is probably significantly lower. 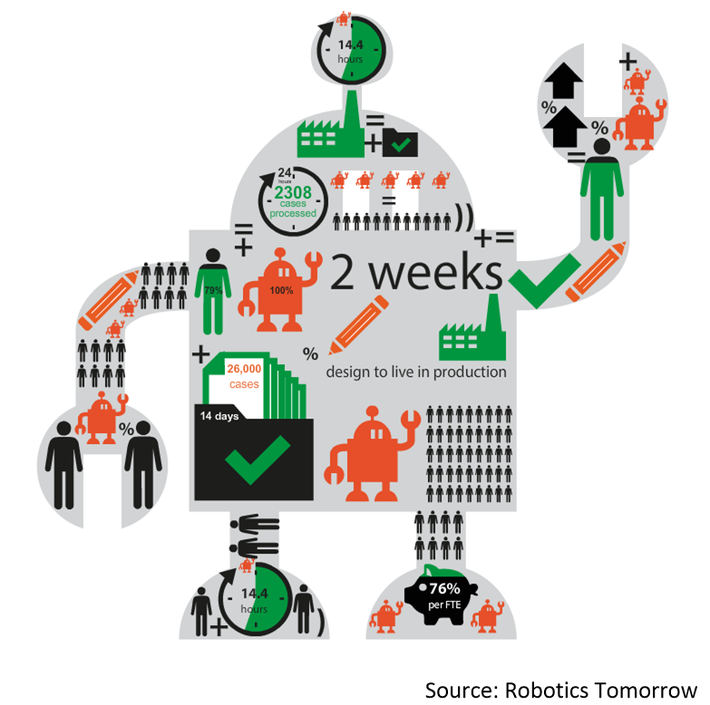 We’ve been trying to get a handle on who has actually adopted AI/ML and to what extent.  So we’ve been combing through these great new data sources from the good folks at McKinsey in their AI Adoption Survey, and Stanford’s Human-Centered AI Institute 2018 AI Index which we used in our previous reporting.  But one thing kept bothering me.  The highest reported implementation is Robotic Process Automation (RPA). 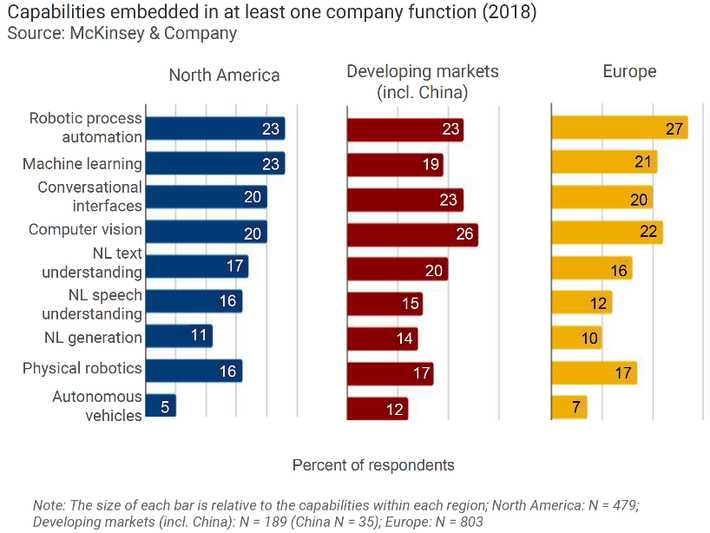 Here’s the question, is RPA really an implementation of AI/ML?  Increasingly the literature presents RPA as part of the AI/ML mix but is it really, or are we in danger of over stating AI/ML adoption?

In the chart above, these respondents (23% to 27% for RPA) said RPA was used in at least one company function.  We don’t have access to the raw data so we don’t know how much overlap there is with the other applications, but conceivably this could be the only application of AI/ML in their company especially for those just starting out on their digital journey.

So What Exactly is Robotic Process Automation (RPA) 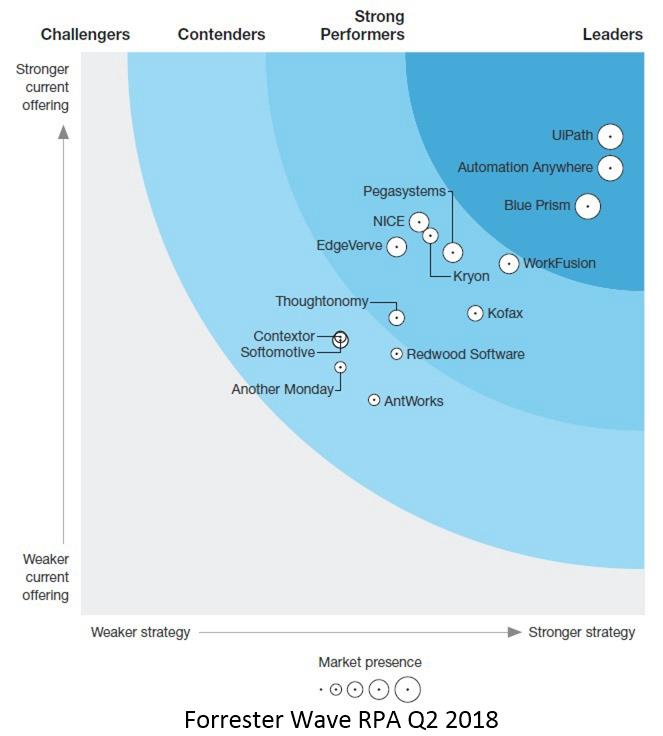 RPA is the automation of certain business processes that are repetitive, labor intensive, and involve at least some sort of elemental rules-based decision making.  These may run the gamut from the simple to the complex and prone to human error specifically with the goals of reducing human labor, reducing errors, and ensuring that whatever decision making is involved in always done in a consistent manner.

In this role RPA is making a very valuable contribution to streamlining business.

In its modern implementation RPA tools are sold as reusable platforms by a variety of developers with the ability to execute specific capabilities such as data scraping, keyboard input, mouse clicks, and the like.  The user then works with a series of windows to define the inputs to the process, the rules to be used, and the output actions to be taken.

Note that the core of this process is human defined rules.

Here are some examples of automated processes that make me question including RPA as worthy of AI/ML adoption credit.

Next Best Offer:  Many marketing automation systems already contain an RPA-like solution that automatically presents your CSR with the next best offer script based on information quickly retrieved, analyzed, and scored during the early part of the CSR’s telephone conversation with the customer.  Similarly, if the inquiry is via email, the system may utilize NLP to interpret the inquiry and use the predictive model score to serve the best answer or next best offer via email or chatbot.  The AI/ML components are the predictive models for scoring and the NLP component for automatically interpreting input.

Routine Email Response:  A common and valuable usage of RPA is handling routine email, phone or text actions.  On the simple end these might be address changes and on the more complex end of automated assistants, these might include setting appointments.  NLP is the key AI/ML component but the rules for handling are human defined.

Automated Inventory Reorder:  In the supply chain, RPA can be used to automatically generate inventory replenishment orders.  These can be as simple as rules-based triggers based on inventory remaining or as complex as utilizing incoming order flow and production data to adapt to variable needs and forecast the amount needed in the reorder.  The AI/ML component is the predictive model using time series data to evaluate future needs based on the forecasting input variables.  The RPA is the mechanical assembly of those inputs into an automated reorder process.

In all these examples the RPA served to organize and make actionable some different AI/ML components but added no AI/ML capabilities.  RPA is perhaps the next logical step beyond Prescriptive Analytics (what should happen) by making those actions easy to implement.

Some RPA applications are simple rules engines with no AI/ML inputs at all.  We used to call these Expert Systems and I’ve personally developed and implemented a number of them.  Take a business process that is based on a complex set of interlinked decision trees and provide users with a simple UI that walks them through the process so that errors of logic do not occur, and produce an automated action.

I suspect that there are far more examples of RPAs used in this role than there are of RPAs that organize the action of AI/ML components like NLP or predictive models.

Are There RPAs That Do Possess Independent AI/ML Capabilities?

In the early stages of implementation there are a few RPA platforms that can learn by observation.  Using a form of human guided reinforcement learning the system observes the actions (mostly in Windows applications) and develops its own rules to explain and duplicate these actions.  This is very similar to the procedures used in human training of physical manufacturing robots.

In principle these would indeed qualify as AI/ML capabilities.  My concern continues to be that we are counting as AI/ML implementations these RPA installs that may on the one hand do nothing more than orchestrate the combination of NLP and predictive models, and on the other hand may be simple rules-based systems with no AI/ML interaction at all.

Where are the Results Most Likely to be Over Stated?

Going back to the original McKinsey data, the analysis is split between the overall response and those companies which are most advanced with multiple reported AI/ML initiatives.

In the advanced group in the left column the adoption by type is significantly different and more in line with what we might imagine the distribution by type should look like.  It is logical that the more mature technologies of predictive modeling (machine learning), chatbots, and other NLP applications should be in the lead. 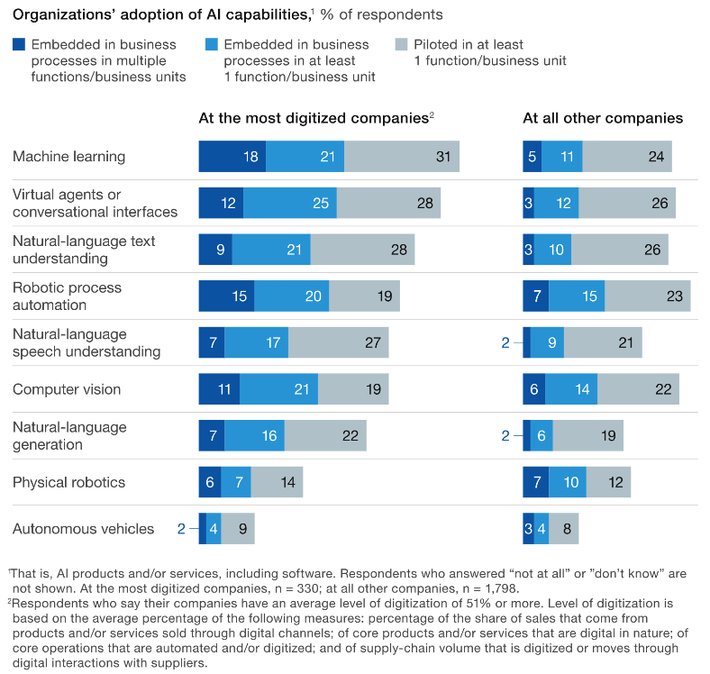 In our previous article we accepted at face value the study finding that 47% of companies reported having embedded at least one AI/ML capability in their business processes.

However, RPA at best is a way to coordinate the actions of various AI/ML inputs, and more typically a system of automation driven by ordinary human-defined rules.  Hardly what we’d want to credit as an application of AI/ML.

I think now we have to temper that optimistic number with the possibility that many reported RPA implementations are not actual AI/ML applications.

About the author:  Bill is Contributing Editor for Data Science Central.  Bill is also President & Chief Data Scientist at Data-Magnum and has practiced as a data scientist since 2001.    His articles have been read more than 2 million times.  He can be reached at:

Some interesting thoughts.  Testing for AI/ML is simple.  Has any algorithmic technique been used to find a pattern in the data (supervised or unsupervised) and that result been used to guide (score) future actions.  If there's both this plus human rules I'd still give credit.  But no, if just human rules then it's not.

The caveat here may be that if a technique like NLP has been used to allow free form text query to get the system to act, then that qualifies.  Likewise if you've used machine image recognition (CNN) to classify objects (like spotting the defective item on the assembly line) that counts even if the subsequent action is rules based.

I agree that users don't care so long as it works.  The several expert systems I built in the early 2000's worked this way with good result.  We only care from the standpoint of trying to figure out to what extent AI/ML has actually penetrated the commercial world.

Thanks for the article!

A couple questions come to mind:

1.  Is there a more concrete breaking point at which we can say, "this is AI and that is not"?

You've gone into this quite well.  The presence of human-based or concrete rules in a system would be an indicator that there isn't AI in that part of a system.  Would it be possible to go further and state that a system requires use of one of certain group of algorithms (Bayes, Least Squares Regression, K-Nearest-Neighbor, ... etc.) in order to be classified as AI?

And on the converse side, is it possible for a system to be 100% AI? There's a question I'm not even really prepared to think about.

2.  Does it matter to users, as long as the system's doing what it's designed to do?

Software engineers are great pragmatists.  I'm not sure that they have as much concern about "real AI" as theoretical Data Scientists would ... or marketing teams, for that matter. :-)

NO, but RPA needs AI and should be business user driven. This has implications for the “whole product” design and the GTM model. The intelligent automation opportunity requires thoughtfully integrated capabilities. While “partnerships’ can be a rapid way of bootstrapping capability and offering choice, it’s also may be undifferentiated and insufficient to meet the market needs. Many companies have made the point that there is overhang (undeployed licenses) of RPA capabilities as the software is absorbed into a long tail of use cases. Undeployed software gets utilized by business-user driven demand and new adoption pains are eased. What’s more is you haven’t facilitated the strategic entry of a partner seeking rents that compete with your ambitions. We saw this in the early days of business intelligence as ERP vendors scaled by developing a deep embed with reporting vendors (Crystal Report or Cognos Impromptu). It’s possible that what’s scales best now is an OEM embed (alongside) a partner choice model.

Automation and Augmentation; Attended and Unattended. These dimensions are distinctions that should disappear into the fabric of the RPA platform. There isn’t a process we shouldn’t think about as being augmented with AI and that unattended processes should almost always kick some selections of hard to get “right” transactions / interactions into an attended stream (and training/learning should happen on these exceptions.) Continuously adaptive processes are the most agile and powerful. That’s the way we are thinking of the continuous retraining and autonomic data science.