IOTA – The potential to drive Data Science for IoT 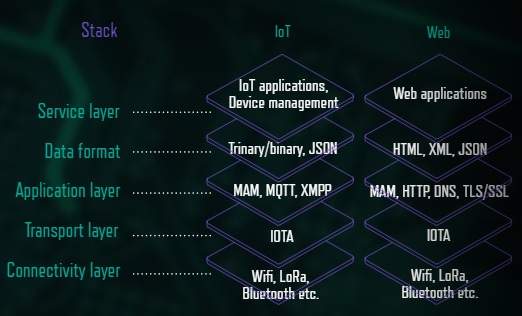 I have a close circle of clued-on/tech savvy friends whose views I take seriously. For the last few weeks, one of these friends has been sending me emails extolling the merits of something called IOTA – which calls itself as the next generation Blockchain.  At first, I thought of IOTA as yet another cryptocurrency. A whole flock of people are rebranding themselves as Bitcoin/ Blockchain / ICO experts and spamming me! So, I was initially sceptical of something that can be the ‘next generation blockchain’. But some more investigation over the holiday season has convinced me that IOTA could be a game changer. In this post, I explore the significance of IOTA and its implications for IoT analytics.

What is (and what is not) IOTA

Before we proceed, this discussion is not about Bitcoin. I am not an expert on Bitcoin. For a discussion on Bitcoin, see what is bitcoin and why it matters from MIT tech review. IOTA is a cryptocurrency. But I am not an expert on cryptocurrencies either (ex the factors driving the price of the currency).  I am more interested in the problem IOTA solves and it’s disruptive potential – especially for IoT. To understand the disruptive potential of IOTA, we first need to understand what IOTA is (and what it is not).

Also, Bitcoin has a scalability problem because as more people start to use the system, it gets slower and it costs higher to process a transaction.  In contrast, the cost of using the IOTA ledger(Tangle) is the cost of the user’s computational effort to verify two randomly selected existing prior tangle ledger sites (transactions).

Source: IOTA-Whitepaper The main point is: "Every new transaction must approve two other transactions." In this sense, IOTA is an attempt to potentially create a superior cryptocurrency platform by overcoming the limitations of Blockchain.

What problem does IOTA solve and why does that matter

If all IOTA created was a ‘better blockchain’ It would be interesting but not disruptive. But IOTA can be really disruptive with IoT. For example, an IoT sensor in a car could retrieve data from the factory automatically. IoT devices can connect and transact with each other in a peer to peer mode.  Potentially, it could help 50 billion devices to connect.  IOTA is getting traction(despite some recent hiccups). The IOTA Foundation announced that Robert Bosch Venture Capital GmbH (RBVC) — the corporate venture ca... — has purchased a significant number of IOTA tokens. Dr. Hongquan Jiang, partner at RBVC, will also join the IOTA Foundation’s advisory board. The core feature of IOTA is the ability ford devices  to transfer data through the Tangle. With recent extensions to the Core, IOTA can even operate in ‘one to many’ mode i.e. the ability to broadcast messages to devices.

What is the implication of IOTA for Data Science for IoT

The ability to manage and share data securely has profound implications for next generation IoT applications such as self driving cars, Drones etc. Such devices would need to collaborate within peers. A leasing model for devices could arise instead of an ownership model. That leasing/ collaboration model could also extend to data arising from IoT devices. Furthermore, interaction between devices can happen autonomously. IOTA could thus be the backbone for IoT applications.

If “Data is the next Oil” makes you cringe .. this is for you

The term ‘Data is the next Oil’ often makes me cringe .. because it’s your data and their Oil! But for a long time, there was not much you could do about it. At least for sensor data, IOTA offers a potentally disruptive way out and yet help to foster an ecosystem.  If you want to work with me on ideas such as this, I explore such concepts in my course  Implementing Enterprise AI course using TensorFlow and Keras