Introducing the “4 Stages of Data Monetization”

Ah, the fond memories of the early days of Saturday Night Live and the hilarious “Point / Counterpoint” debates between Jane Curtin and Dan Aykroyd. I can just imagine this routine being played out today over the value of data…

Jane Curtin: “Dan, you ignoramus.  Everyone knows that data is the new oil; that data will power the economic growth of the 21st century. Heck, The Economist even declared data the world’s most valuable resource.  But how would you know that, given the most provocative pieces of literature that you read is found on the walls of public toilets.”

Dan Aykroyd: “Jane, you ignorant slut. Anyone with an IQ over 50 knows that just storing data is expensive and carries significant compliance and regulatory risks; that the value of data comes from using it to optimize key business processes, not just having it lie there like a beached whale in your bathroom tub.  But then again, what should one expect from a swamp sow like yourself whose greatest educational accomplishment was flunking out of Faber College.”

Of all the weird things to happen in 2020, who would have ever contemplated a day when the price of a barrel of oil would go negative. But on April 20, 2020 and for the first time EVER, the price of the main U.S. oil benchmark fell to about -$37.63 (see Figure 1). 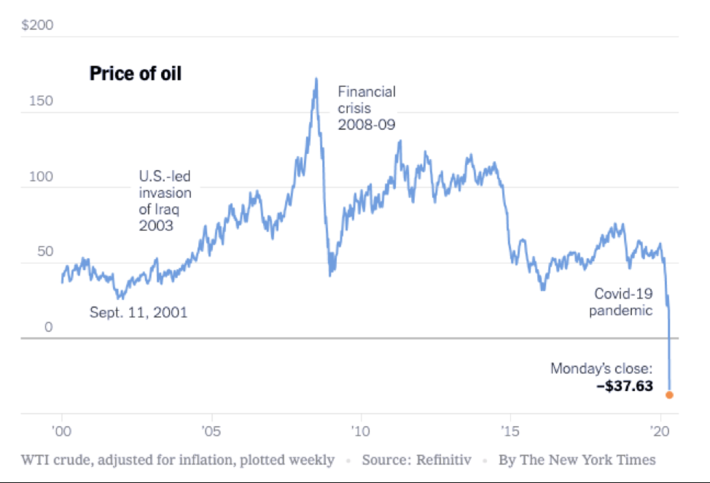 Figure 1: “Too Much Oil: How a Barrel Came to Be Worth Less Than Nothing”

Yes, the price on a barrel of oil fell so far that traders were paying buyers to take oil off their hands.

You see, there are substantial costs – and risks – associated with just storing oil. And this analogy holds true for data as well. There is no value in just storing data. There are storage, management, security, backup and governance costs as well as potential compliance and regulatory liabilities associated with just storing data. In the blog “Data Curation: Weaving Raw Data into Business Gold”, I introduced Figure 2 to highlight the economic similarities of oil and data. 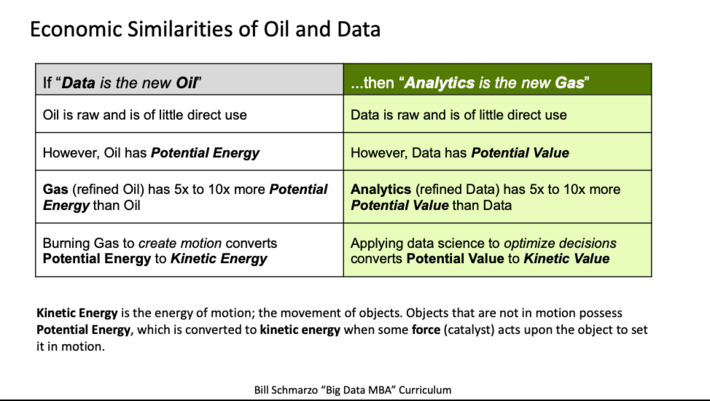 Data, like oil, has latent value. That is, data and oil have potential value that has not yet realized. Possession of data, like possession of oil, in of itself is not sufficient in providing economic value.  Data, like oil, has to be put to use in order to convert that latent (potential) value into kinetic (realized) value.

The value of data is only realized when you apply the customer, product, and operational insights buried in the data to optimize the organization’s key business initiatives and supporting use cases. To get value from data, one needs an economics-based monetization strategy where value is created in the "use", not in the "possession" of the data.

It’s how you put that data to work that converts latent value into realized value, and that’s the power of a data science value engineering methodology that focuses on identifying, validating, valuing and prioritizing where and how the data can derive and drive new sources of customer, product, and operational value. It requires a management mindset focused on data monetization – the process of generating quantifiable economic benefits from the data.

The article “$21 Trillion in Intangible assets is 84% of S&P 500 Value” highlights the changing nature of “value” as reflected in the market cap (market value) of today’s digitally-proficient companies.  The intangible assets of the 5 largest market cap companies in 2018 were 5x ($25 trillion versus $4 trillion) more valuable than their tangible (non-physical) assets (see Figure 3). 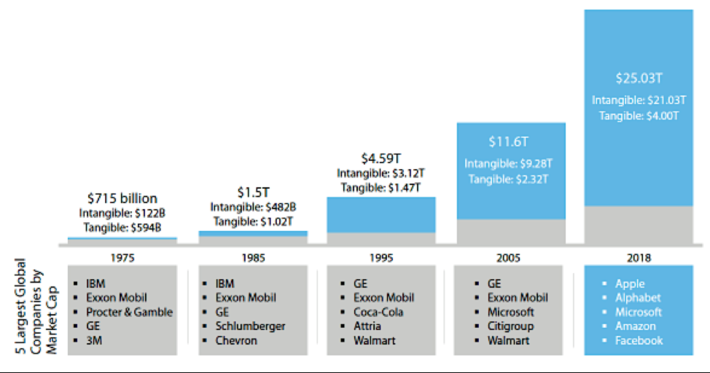 Economics, on the other hand, uses a “value in use” asset valuation methodology that determines that value of an asset based upon how much revenue or “value” that the use of that asset can generate. That is why companies trying to excel in the age of digital transformation would be better served if they embraced an economics, instead of an accounting, value generation mentality.

Mastering the “4 Stages of Data Monetization”

Companies need a roadmap to help them exploit the unique economics behaviors of this intangible asset called data – an asset that never depletes, never wears out, and can be used across an unlimited number of use cases at near zero marginal cost.  Companies must transition their executive mindset from “data as a cost to be minimized” to “data as an asset that will fuel the economic growth of the 21st century.”  Organizations need the “4 Stages of Data Monetization” (see Figure 4). The “4 Stages of Data Monetization” provides both a benchmark against which organizations can measure their data monetization effectiveness as well as a guide for helping organizations master data as the asset that will fuel the economic growth of the 21st century.

Interesting how the “4 Stages of Data Monetization” tie back to the Schmarzo Economic Digital Asset Valuation Theorem.  The Schmarzo Economic Digital Asset Valuation Theorem provides a framework for how digitally-literate organizations can exploit the unique economic characteristics of data and analytics – assets that not only never deplete but actually increase in value the more that they are used – to reduce marginal costs, increase marginal revenues and profits, and create continuously-learning and adapting assets that accelerates the value of these digital assets (see Figure 5). Funny how all efforts to understand how organizations can monetize their data and analytic assets (as well as the role of the Chief Data Monetization Officer) always seems to lead back to the Schmarzo Economics Digital Asset Valuation Theorem.  Funny, or maybe it’s just the foundation for creating value in the new digitally-transforming world?