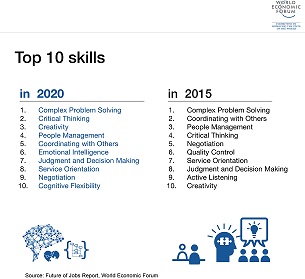 In my previous article, I wrote about the impact of Robotic Process Automation which drives Enterprise AI. In that article, I said: The first group of workers to feel the impact of RPA and AI as described above will be offshore workers (including offshore developers).

Here is an extended prediction to that theme ...In 2018 AI will start to bring jobs back from offshore destinations to the West

Before we proceed, the views expressed in this article are personal. They do not reflect the views of any organization, institution or company I have worked with. Also, I have not been involved in the IT Offshore services business (either as a customer or as a provider). I am based in the UK and I teach a course called – Implementing Enterprise AI where I explore the impact of AI on the Enterprise

Why do I believe that in 2018 AI will start to bring jobs back from offshore destinations to the West?

Let us explore these observations in more detail

MIT tech review recently published a lengthy article called India warily eyes AI which says that for years, offshore IT firms staffed projects heavily leveraging the cost advantage. But with AI, that advantage has permanently shifted. Some more reasons from other sources:

There is a curious caveat here.  Many of the employees of offshoring companies (who are mostly focussed on their current billable projects) are not geared to make the transition to AI. But the large companies themselves will do (probably with a lot fewer employees). Vendors like TCS (Ignio) and Wipro (Holmes) are building sophisticated AI based products already. Mid-tier offshoring vendors are less prepared for AI. But nevertheless, AI has permanently affected the labour / offshoring arbitrage model and that advantage will never return to what it was before. It’s just a matter of time.

2) Augmented Intelligence: AI will lead to a new set of jobs which will need people to work closely with AI

We are likely to encounter Augmented Intelligence rather than Artificial Intelligence first. With Augmented Intelligence, AI will lead to a new set of jobs which will need people to work closely with AI. A Jan 2016 report from the World Economic Foundation argues that five years from now, over one-third of skills (35%) that are considered important in today’s workforce will have changed. The report lists Emotional Intelligence and Collaboration as key skills for the future workplace. This is consistent with the idea that many mundane tasks that could be automated will be implemented by machines. In this role, the human being will complement the machine and will undertake tasks that machines cannot easily do.  The Harvard Business Review highlights the importance of soft skills and liberal arts. The idea is not so alien because even today, some tech leaders like Reid Hoffman have a non tech education but lead large tech companies. William Vorhies also elaborates on similar trends in

Keeping Your Job in the Age of Automation -

“In fact, for those with more complex jobs, automation is a huge benefit. Remember, productivity and efficiency is for robots, and these are work factors where humans shouldn't be competing against anyway. By hollowing out your job of wasteful, repetitive, machine-like tasks, your time will be freed to focus on more strategic, productive, abstract and creative tasks or projects. In this scenario, the job doesn’t disappear—it evolves.”

3) Younger people in the West could make this transition of they learn to work with AI.

From the first two points, it follows that: If the future involves humans and machines working together ... (which most people seem to agree), then the job is better done closer to the end customer(onshore) than offshore.  Especially, younger people in west could make the transition of understanding AI and then applying soft skills to enhance their job prospects. 2017 saw the beginnings of this trend. The technology (and the business case) exist. It is just a matter of time. I believe that this trend will accelerate in 2018. The younger workforce in the West maybe more adaptable to working with augmented intelligence and AI could provide an optimistic picture for them if they leverage the opportunities. I explore the impact of AI on the Enterprise in the Implementing Enterprise AI

Very good article and, in my opinion, communication and collaboration have always been key to any successful team, especially technical ones, which why I hate outsouring.