Here I’m assuming that you are familiar with basic Calculus and Machine Learning concepts, e.g. you know what classification and regularization is. Ideally you also know a bit about how optimization techniques like gradient descent work. But even if you’re not familiar with any of the above this post could still turn out to be interesting ;)

One thing to note is that the code examples here aren’t terribly efficient. They are meant to be easy to understand. In an upcoming post I will explore how to write an efficient Neural Network implementation using Theano.

Let’s start by generating a dataset we can play with. Fortunately, scikit-learn has some useful dataset generators, so we don’t need to write the code ourselves. We will go with the make_moons function. 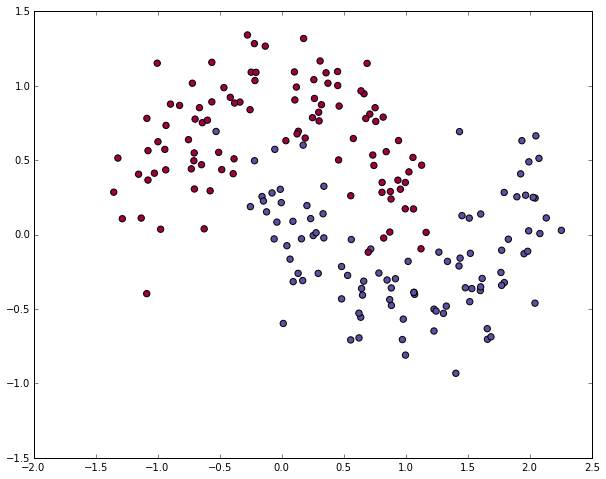 The dataset we generated has two classes, plotted as red and blue points. You can think of the blue dots as male patients and the red dots as female patients, with the x- and y- axis being medical measurements.

Our goal is to train a Machine Learning classifier that predicts the correct class (male of female) given the x- and y- coordinates. Note that the data is not linearly separable, we can’t draw a straight line that separates the two classes. This means that linear classifiers, such as Logistic Regression, won’t be able to fit the data unless you hand-engineer non-linear features (such as polynomials) that work well for the given dataset.

In fact, that’s one of the major advantages of Neural Networks. You don’t need to worry about feature engineering. The hidden layer of a neural network will learn features for you. 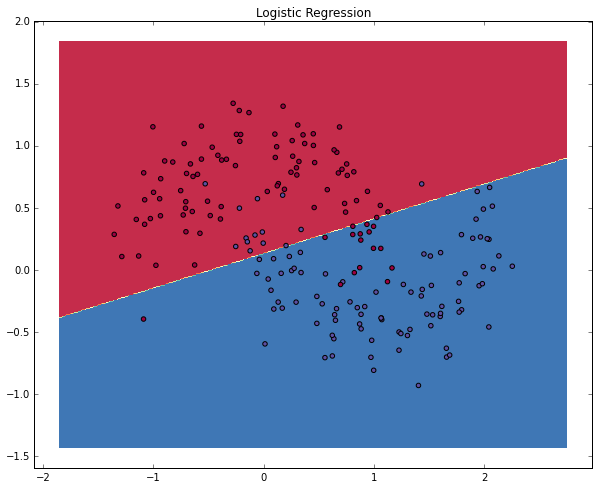 The graph shows the decision boundary learned by our Logistic Regression classifier. It separates the data as good as it can using a straight line, but it’s unable to capture the “moon shape” of our data.

Let’s now build a 3-layer neural network with one input layer, one hidden layer, and one output layer. The number of nodes in the input layer is determined by the dimensionality of our data, 2. Similarly, the number of nodes in the output layer is determined by the number of classes we have, also 2. (Because we only have 2 classes we could actually get away with only one output node predicting 0 or 1, but having 2 makes it easier to extend the network to more classes later on). The input to the network will be x- and y- coordinates and its output will be two probabilities, one for class 0 (“female”) and one for class 1 (“male”). It looks something like this: We can choose the dimensionality (the number of nodes) of the hidden layer. The more nodes we put into the hidden layer the more complex functions we will be able fit. But higher dimensionality comes at a cost. First, more computation is required to make predictions and learn the network parameters. A bigger number of parameters also means we become more prone to overfitting our data.

How to choose the size of the hidden layer? While there are some general guidelines and recommendations, it always depends on your specific problem and is more of an art than a science. We will play with the number of nodes in the hidden later later on and see how it affects our output.

. This is useful because it allows us to compute

once and re-use its value later on to get the derivative.

Because we want our network to output probabilities the activation function for the output layer will be the softmax, which is simply a way to convert raw scores to probabilities. If you’re familiar with the logistic function you can think of softmax as its generalization to multiple classes.

How our network makes predictions:

Our network makes predictions using forward propagation, which is just a bunch of matrix multiplications and the application of the activation function(s) we defined above. If x is the 2-dimensional input to our network then we calculate our prediction

is the input of layer

is the output of layer

after applying the activation function.

are parameters of our network, which we need to learn from our training data. You can think of them as matrices transforming data between layers of the network. Looking at the matrix multiplications above we can figure out the dimensionality of these matrices. If we use 500 nodes for our hidden layer then

. Now you see why we have more parameters if we increase the size of the hidden layer.

) that minimize the error on our training data. But how do we define the error? We call the function that measures our error the loss function. A common choice with the softmax output is the categorical cross-entropy loss (also known as negative log likelihood). If we have

classes then the loss for our prediction

with respect to the true labels

The formula looks complicated, but all it really does is sum over our training examples and add to the loss if we predicted the incorrect class. The further away the two probability distributions

(the correct labels) and

(our predictions) are, the greater our loss will be. By finding parameters that minimize the loss we maximize the likelihood of our training data.

As an input, gradient descent needs the gradients (vector of derivatives) of the loss function with respect to our parameters: