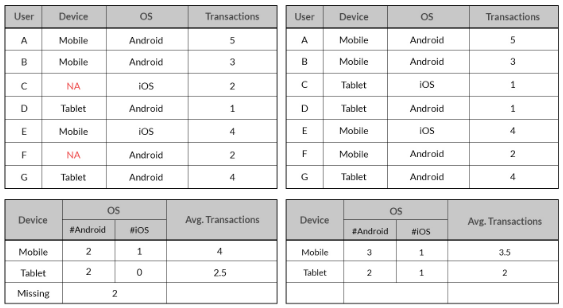 The 2 tables above give different insights. The inference from the table on the left with the missing data indicates lower count for Android Mobile users and iOS Tablet users and higher Average Transaction Value compared to the inference from the right table with no missing data. The inference from the data with missing values could adversely impact business decisions. The best scenario is to get the actual value that was missing by going back to the Data Extraction & Collection stage and correcting possible errors during these stages. Generally, that won’t be the case and you will still be left with missing values.

Let’s look at some techniques to treat the missing values:

Unless the nature of missing data is ‘Missing completely at random’, the best avoidable method in many cases is deletion.

a. Listwise: In this case, rows containing missing variables are deleted.

In the above case, the entire observation for User A and User C will be ignored for listwise deletion

b. Pairwise: In this case, only the missing observations are ignored and analysis is done  on  variables present.

Both the above methods suffer from loss of information. Listwise deletion suffers the maximum information loss compared to Pairwise deletion. But, the problem with pairwise deletion is that even though it takes the available cases, one can’t compare analyses because the sample is different every time.

Mean, median and mode are the most popular averaging techniques, which are used to infer missing values. Approaches ranging from global average for the variable to averages based on groups are usually considered.

For example: if you are inferring missing value for Revenue, you might assign the average defined by mean, median or mode to such missing value. You could also consider taking into account some other variables such as Gender of the User and/or the Device OS to calculate such an average to be assigned to the missing values.

The above table shows the difference in imputed missing values of Revenue arrived by taking its global mean and mean based on which OS platform it belongs to.

Let's take a look at an example where we shall test all the techniques discussed above to infer or deal with such missing observations. With the information on Visits,Transactions, Operating System, and Gender, we need to build a model to predict Revenue. The summary of the information is given below:

We will be using a linear regression model to predict 'Revenue'. A quick intuitive recap of Linear Regression Assume 'y' depends on 'x'. We can explore their relationship graphically as below:

Let's now deal with the missing data using techniques mentioned below and then predict 'Revenue'.

Delete or ignore the observations that are missing and build the predictive model on the remaining data. In the above example, we shall ignore the missing observations totalling 7200 data points for the 2 variables i.e. ‘Transactions’ and ‘Gender’.

Build a Linear model to predict 'Revenue' with 15,600 observations.

B. Impute by Average

i) Impute 'Transactions' by Mean

Mean of Transactions for Users on Android: 0.74

Mean of Transactions for Users on iOS: 1.54

All the missing observations for 'Transactions' will get 0.74 and 1.54 as its value for Users on Android and iOS respectively.

Since ‘Gender’ is a categorical variable, we shall use Mode to impute the missing variables. In the given dataset, the Mode for the variable ‘Gender’ is ‘Male’ since it's frequency is the highest. All the missing data points for 'Gender' will be labeled as ‘Male’.

Build a Linear model to predict 'Revenue' with the entire dataset totalling 22,800 observations.

i) Impute 'Gender' by Decision Tree

There are several predictive techniques; statistical and machine learning to impute missing values. We will be using Decision Trees to impute the missing values of 'Gender'. The variables used to impute it are 'Visits', 'OS' and 'Transactions'.

Using a simple linear regression, we will impute 'Transactions' by including the imputed missing values for 'Gender' (imputed from Decision Tree). The variables used to impute it are 'Visits', 'OS' and 'Gender'.

Build a Linear model to predict 'Revenue' with the entire dataset totalling 22,800 observations.

A common and quick way to evaluate how well a linear regression model fits the data is the coefficient of determination or R2.

R2 will remain constant or keep on increasing as long as you add more independent variables to your model. This might result in overfitting. Overfitting leads to good fit on the data used to build the model or in-sample data but may poorly fit out-of-sample or new data. Adjusted R2 overcomes this shortcoming of R2 to a great extent. Adjusted R2 is a modified version of R2 that has been adjusted for the number of predictors in the model.

Let's compare the linear regression output after imputing missing values from the methods discussed above:

In the above table, the Adjusted R2 is same as R2 since the variables that do not contribute to the fit of the model haven't been taken into consideration to build the final model.

Imputation of missing values is a tricky subject and unless the missing data is not observed completely at random, imputing such missing values by a Predictive Model is highly desirable since it can lead to better insights and overall increase in performance of your predictive models.

Source Code and Dataset to reproduce the above illustration available here

Thanks for this. Also, check out the paper by Maytal Saar-Tsechansky and Foster Provost called "Handling Missing Values when Applying Classification Models". The abstract may be helpful:

"Much work has studied the effect of different treatments of missing values on model induction,
but little work has analyzed treatments for the common case of missing values at prediction time.
This paper first compares several different methods—predictive value imputation, the distribution based
imputation used by C4.5, and using reduced models—for applying classification trees to
instances with missing values (and also shows evidence that the results generalize to bagged trees
and to logistic regression). The results show that for the two most popular treatments, each is
preferable under different conditions. Strikingly the reduced-models approach, seldom mentioned
or used, consistently outperforms the other two methods, sometimes by a large margin. The lack of
attention to reduced modeling may be due in part to its (perceived) expense in terms of computation
or storage. Therefore, we then introduce and evaluate alternative, hybrid approaches that allow
users to balance between more accurate but computationally expensive reduced modeling and the
other, less accurate but less computationally expensive treatments. The results show that the hybrid
methods can scale gracefully to the amount of investment in computation/storage, and that they
outperform imputation even for small investments.

Comment by Jacob Joseph on April 15, 2016 at 8:39am
Thanks Andrea. The purpose of the article was to show the importance and way of imputing missing values rather than particular tool implementing it. Also, consider someone at the beginner level would appreciate and comprehend the multiple imputation much better.

this is a really well structured post, thank you for sharing.

you could also mention multiple imputation techniques which consist in simulating multiple possible values for each missing data and then summarising among them in order to retrieve the actual value to use as a replacement: multiple imputation

for instance this can be done quite easily in R thanks to the mice package: http://datascienceplus.com/imputing-missing-data-with-r-mice-package/

thank you once more!

You are welcome John. Glad you liked it.