By building a regression model to predict the value of Y, you’re trying to get an equation like this for an output, Y given inputs x1, x2, x3…

Sometimes there may be terms of the form b4x1.x2 + b5.x1^2… that add to the accuracy of the regression model. The trick is to apply some intuition as to what terms could help determine Y and then test the intuition.

Scatter plots can help you tease out these relationships as we will show in the R section below.

Where is it applicable?

A very common use case is predicting sales from advertising spend on various media. Another common one is predicting house prices based on inputs like sqm/sqft area of the house, the location, number of rooms etc.

I couldn’t find a public dataset for the advertising use-case even though I tried for a while. If you know any such dataset with media-specific advertising spend and sales for the corresponding period with at over 40 or so rows, do share in the comments. I found a dataset on mpg (miles per gallon) on UCI Machine Learning Repository and other car data and regression on that was quite fun. 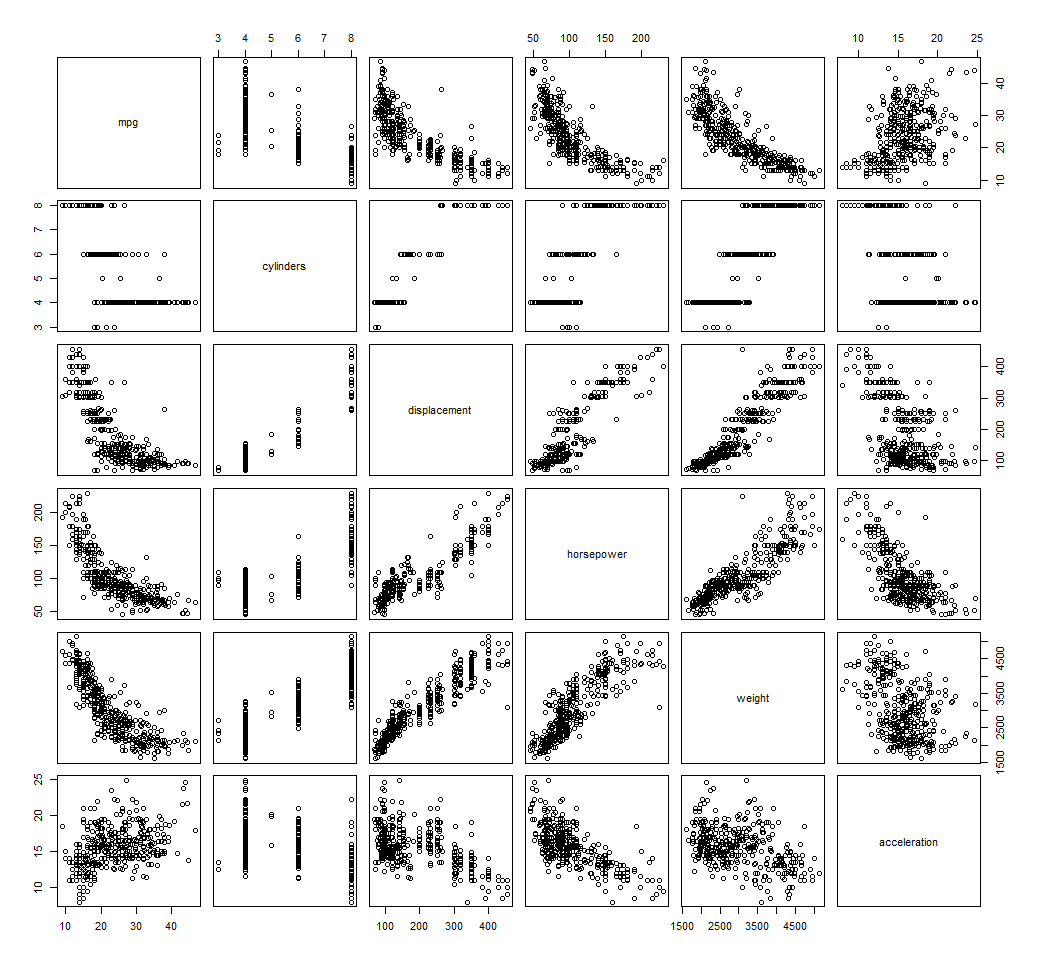 Your plot would also show relationships among mpg, model-year and origin variables. I excluded them here because the plot image about would become too large to be easily intelligible.

Since mpg clearly depends on all the variables, let derive a regression model, which is simple to do in RStudio.

Now we’re getting somewhere as all the coefficients have a small p-value.

Let’s try some non-linear combinations with different exponents for horsepower.

The Adjusted R-squared is the highest so far. Another thing to note is that even though the p-value for horsepower^3 is very small (relationship is significant), the coefficient is tiny. So we should consider removing it unless horsepower^3 has an intuitive or business meaning to us in the given context.

While creating models we should always bring business understanding into consideration. If the context dictates that that particular variable is important to explaining the outcome, we will retain it in the model even if the coefficient is very small.

Adjusted R-squared reduced. We can do better.

There we go. This is a good enough model. Adjusted R-squared is the second highest. None of the coefficients seem miniscule. The coefficient for weight is quite small compared to the others but the weight values are in thousands. So, the effect in reality is quite significant. Also, intuition dictates that mpg should be dependent on the weight of the vehicle. So even if the effect were small, we would have kept it.

Useful Questions to ask of the Dataset

These are based on the excellent analysis in “An Introduction to Statistical Learning” textbook. Let’s use the model obtained to answer the questions.

We were able to explain 85% of the variance in miles per gallon using the regression model below. Intuition agrees with this model as weight and horsepower would definitely affect mpg. A surprising finding was that model_year and origin had significant effects also.

Info about the dataset from UCI Machine Learning Repository