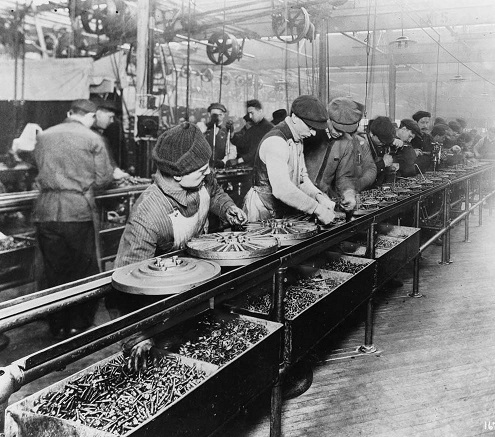 Two months ago, these folks, many of them elderly, would have been celebrating Christmas and looking forward to the next Christmas – knowing that northern Italy has one of the best healthcare systems in the world

But apart from the human cost, the economic impact of COVID19 will also be severe

It’s still too early to think of ‘after the virus’ – but policy makers will start to think of new strategies soon.

One thing is sure, the world has changed completely, and old ways of bulk consumption and cheap imports will not work.

Azeem Azhar proposes in exponential view that “we have underinvested in the things that make us individually and collectively resilient to shocks” and also that “Firms will respond by distributing their manufacturing and supply base.”

What will this re-alignment of supply chains look like?

AI and other technologies are already helping to fight COVID-19

In this post, we explore scenarios beyond the virus i.e. how AI and next generation manufacturing technologies(FMS) can lead to more local manufacturing jobs if we invest in educating the workforce to work with AI

The end of the (assembly) line

The assembly line has been an innovation from the 1920s onwards (Henry Ford’s era).

The success of the assembly line leads to a reluctance to change something that is not broken.

But both these factors may have now changed.

For reasons I mention below, the Assembly line could be replaced by a flexible manufacturing system (FMS) which has artificial intelligence at its core.

When that happens, the impact will be profound – and positive – for local jobs

The main advantages of an FMS is its high flexibility in managing manufacturing resources like time and effort in order to manufacture a new product.

The best application of an FMS is found in the production of small sets of products in contrast to mass production.

FMS requires a higher skilled work force – but that is a problem which is easier to overcome.

Another surprising incentive is robots and AI.

How about a 3 day working week in factory and two days from home for manufacturing jobs?

And what about the other two days?

You could work from ‘home’ with AI/ robotics managing some of the production.

This idea is not so far-fetched through the rise of Cobots – how humans and AI are working together in 1500 companies (...

MIT Technology Review asks “Are you prepared for what's next?” - As automation and hybrid work environments become a necessity to keep up with customer demands, the question isn't if these technologies will impact your business, but how. If you aren't preparing for the new world of work, you risk being left behind by the market.

A change driven by necessity and values

A COVID 19 vaccine is at least 9 months away – to the end of the year.

It will take longer to be fully available.

The virus may mutate.

So, travel will not be comfortable for the foreseeable future.

This will impact current supply chains and even if they are restored, governments will seek to distribute their supply chains.

Last week, a friend described the Corona virus (COVID 19) as the ‘Berlin wall of capitalism’.

Old ways of cheapest imports will no longer work.

Not just for companies but for people, policy makers and values – including workers rights.

Capitalism is defined as “an economic and political system in which a country's trade and industry are controlled by private owners for profit, rather than by the state.”.

In its purest form, capitalism is founded on ethics ex: The Protestant Ethic and the Spirit of Capitalism - a book which I have liked (from a secular sense)

Consumerism on the other hand is a social and economic order that encourages an acquisition of goods and services in ever-increasing amounts.

COVID 19 could mark the end of consumerism and bring us back to old-fashioned capitalism and in doing so, could change manufacturing to a local focus (assisted by AI,Robotics and Education)

There are other factors at play – for example - Climate change – new rules could spell the end of throwaway culture.

These ideas are all values driven. We are thus not talking about local / non-local - but rather people will buy based on values and from areas where there is an alignment of values instead of the cheapest source

To conclude, in this post I outline how AI and next generation manufacturing technologies(FMS) can lead to more local manufacturing jobs if we invest in educating the workforce to work with AI.

These views are personal and are not aligned to any organisation I am associated with.