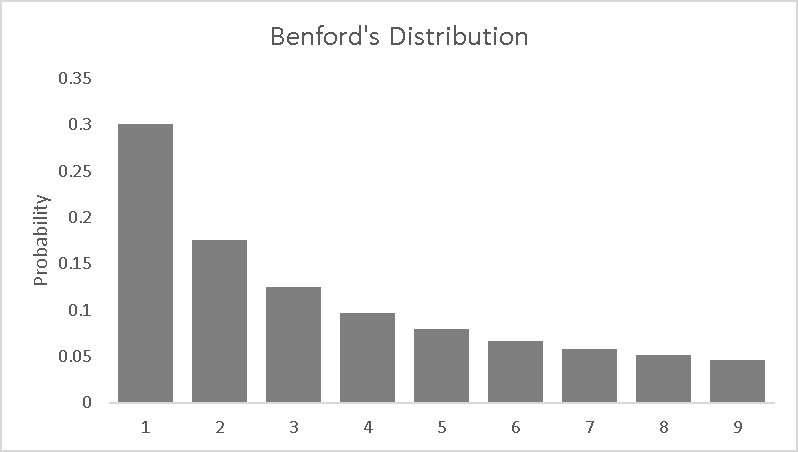 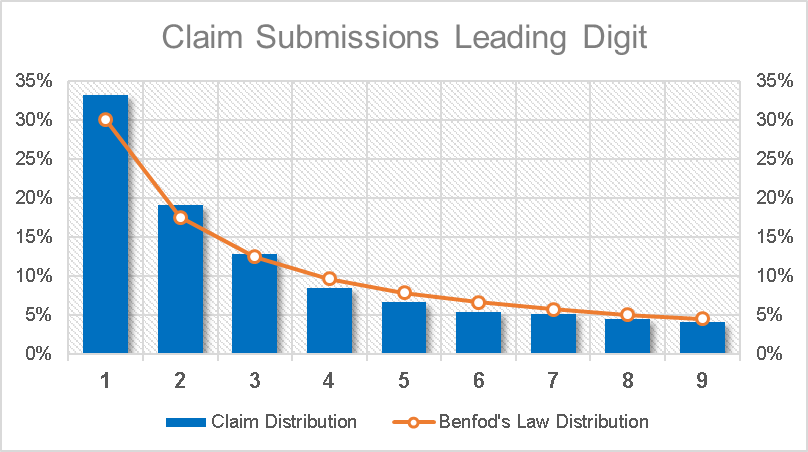 Most business data, such as count of sales, costs, accounts receivables, payments, and even the buyer’s street addresses, can be considered as logical or naturally occurring numbers. By connecting the first-digit frequency distribution of naturally occurring data with Benford's probability curve, auditors can easily spot possible data flaws or fraudulent transactions. Hence, when used appropriately, Benford's law can be a valuable and low-costing tool for identifying spurious transactions for advance analysis.

Thanks for your comment and I totally agree with your comment "Any serious work should cite those references". I hope this will help. I would also suggest you to read about Mark Nagrini who is best known for his work on Benford's Law and its usage.

You wrote "In the past some researchers in Canada used the Benford’s Law distribution to detect anomalies within the claims amount data for one of the healthcare organization."

Please,who are those people?.
Any serious work should cite those references

The chi-square test has excessive power when used with big data sets. Even for a sample of 1k elements, it may lead to false positives, that is, flagging as suspicious empirical distributions that could just as well be a draw from an actual Benford's distribution.

There are some better techniques based on bootstrap procedures to perform such tests, which can be found in these two following articles:

SUH, I.; HEADRICK, T.C. A comparative analysis of the bootstrap ver...

These approaches lead to much more accurate results, but the downside is the expensive computation they require.

With that in mind, I have developed a package for Apache Spark which implements both methods, allowing for assessing the goodness of fit of large datasets. I also keep it running on a Spark local cluster at AWS EC2 for demonstration purposes: Benford Analysis for Spark.

Thanks Ted Dunning for your comment. However, please keep in mind that I am looking at the sample of 1030 claims out of the ~100k claims transactions for this article which can possibly result in things that one would not want to see while utilizing the Benford's Law technique (mentioned under the Best Data Types section of this article). Also, Benford’s Law is a Test to examine if the resulting frequency distribution follows the “natural” flow when compared to the Benford’s Law distribution and even the slightest deviation will interest the auditors to dig deeper when the stakes are high. It will be helpful to know that Frank Benford never limited his study to the lead digits of naturally occurring number. He also developed frequency distributions for secondary distributions to explore second and third digit anomalies in such numbers and I believe the classic study that you referred to in your comment used the second digit distribution where the 7,8,9 etc. digits emerged. This article is aimed to introduce a way to identify fraud and use other statistical tests in conjunction with this test to make a solid decision. Once again thanks a lot for sharing your views and reading this article.

This is unlikely to be enough deviation to signal blatant fraud.

In the classic demonstration of fraud and structuring, the leading digits were 7, 8 or 9 about 90% of the time. This is wildly different from the Benson distribution. Your results are only slightly different and there could easily be process structure that explains the issue such as a round number required amount for certain procedures.

Most unsupervised fraud detection schemes find structure even more easily than fraud. Co-pay limits, required reimbursements, and such are examples of such structure.