This article has 4 sections:

The full code and theory can be found here: https://github.com/TanselArif-21/GamblersRuin

The Gambler’s Ruin problem frames a gambler who begins gambling with an initial fortune - in dollars say. At each successive gamble, the gambler either loses $1 or gains $1. This means that the gambler's fortune after this gamble is only dependent on their current fortune and not how the fortune ended up at this value. The problem is to find the probability that the gambler goes bankrupt - loses the entirety of the fortune. This problem is a kind of random walk.

Below is a faster simulation consisting of 500 individual simulations:

And here's an image of the results for 1000 simulations: 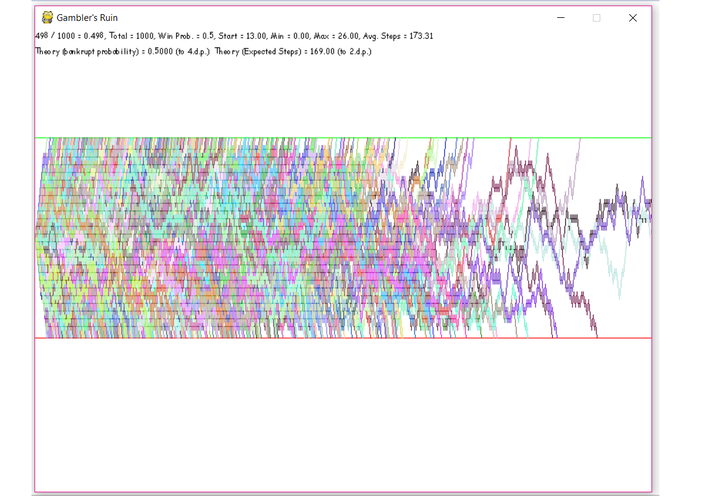 The more the simulations, the better the approximation of the theoretical value.

We will call the entire procedure above, a single simulation of the gambler's fortune. After carrying out many of these simulations, we can obtain an estimate of the bankruptcy probability by taking all the simulations where the fortune reached $0, and divide this by the total number of simulations.

Additionally, we can count the number of steps per simulation and calculate the mean number of steps before the gambler either goes bankrupt or takes their profit and walks away.

For the visualisation of this process, we will use Pygame. Pygame has a pygame.draw.line function which allows a simple line to be drawn on the canvas by specifying the line's starting point, ending point and its colour. So, at each step of a single simulation, if we define a line with its starting point as the current fortune and the ending point the fortune at the next step, we will have defined a line to be drawn by the previously mentioned function. A list of line objects can be formed in this way and then drawn on the canvas one by one to form a visual representation of a simulation.

The next section will give more insight into the pseudocode of this app.

import pygame # For the visualisation

Create a class called 'Line' containing a start value, an end value and a colour:

Define a function to deal with drawing a list of lines to the canvas:

A function tasked with drawing lines to the screen.

:param lines: a list of line objects to draw

:param count: a list of 0's and 1's where a 1 means bankruptcy at that step

:param step: an integer to specify which step in the simulation to display to

Define a function to deal with the stop condition:

A function which checks the stop conditions.

Define a function to deal with a single sample from the Bernoulli distribution:

A function which returns a 1 or a -1. p is the probability of obtaining a 1

:param p: float between 0 and 1. The probability of success

Define a function to deal with the propagation of a single trajectory/simulation:

A function which simulates the trajectories for the current fortune. This function returns 2 data structures: A list containing the the trajectory value concatenated, and a list of the same size containing information on whether that step resulted in a bankruptcy or not

:param maximum: float. Amount above which take win is actioned

Define a main function to run the propagation of multiple simulations:

The full annotated code can be found here.

The theoretical solution to the expected number of steps is also conditioned on the first gamble:

where u_i and E_i are the probability of bankruptcy and expected number of steps with initial fortune i respectively.
The full theory and derivation can be found here.