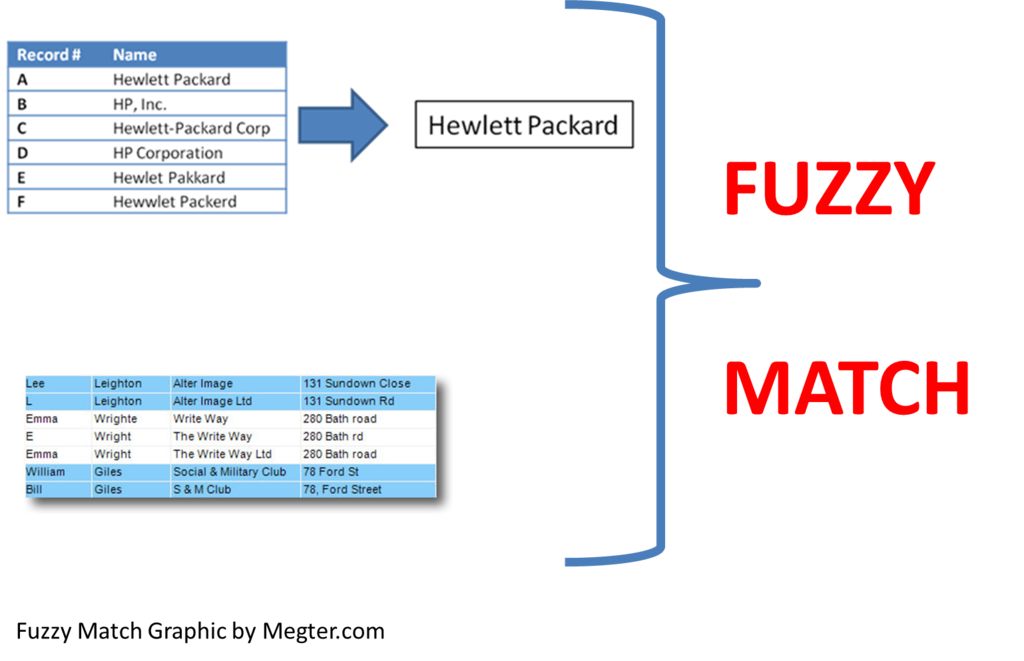 A common scenario for data scientists is the marketing, operations or business groups give you two sets of similar data with different variables & asks the analytics team to normalize both data sets to have  a common record for modelling.

Here is an example of two similar data sets:

How would you as a data scientist match these two different but similar data sets to have a master record for modelling?

Short of doing it manually, the most common method is fuzzy matching.

So, what is Fuzzy matching? Here is a short description from Wikipedia:

Fuzzy matching is a technique used in computer-assisted translation as a special case of record linkage. It works with matches that may be less than 100% perfect when finding correspondences between segments of a text and entries in a database of previous translations. It usually operates at sentence-level segments, but some translation technology allows matching at a phrasal level. It is used when the translator is working with translation memory.

Given below is list of algorithms to implement fuzzy matching algorithms which themselves are available in many open source libraries:

Damerau–Levenshtein distance is a distance (string metric) between two strings, i.e., finite sequence of symbols, given by counting the minimum number of operations needed to transform one string into the other, where an operation is defined as an insertion, deletion, or substitution of a single character, or a transposition of two adjacent characters.

Bitap algorithm with modifications by Wu and Manber

Bitmap algorithm is an approximate string matching algorithm. The algorithm tells whether a given text contains a substring which is "approximately equal" to a given pattern, where approximate equality is defined in terms of Levenshtein distance — if the substring and pattern are within a given distance k of each other, then the algorithm considers them equal.

n-gram is a contiguous sequence of n items from a given sequence of text or speech. The items can be phonemes, syllables, letters, words or base pairs according to the application. An n-gram model is a type of probabilistic language model for predicting the next item in such a sequence in the form of a (n − 1)–order Markov model.

A BK-tree is a metric tree suggested by Walter Austin Burkhard and Robert M. Keller specifically adapted to discrete metric spaces.To understand, let us consider integer discrete metric d(x,y). Then, BK-tree is defined in the following way. An arbitrary element a is selected as root node. The root node may have zero or more subtrees. The k-th subtree is recursively built of all elements b such that d(a,b) = k. BK-trees can be used for approximate string matching in a dictionary

Soundex is a phonetic algorithm for indexing names by sound, as pronounced in English. The goal is for homophones to be encoded to the same representation so that they can be matched despite minor differences in spelling.

You could also use Jaro-Winkler for fuzzy logic matching

Thanks for sharing. Because of the rising importance of data-driven decision making, having a strong fuzzy matching tools are an important part of the equation, and will be one of the key factors in changing the future of business. There is so much great work being done with data matching tools in various industries such as financial services and health care. It will be interesting to see the impact of these changes down the road.

There are also a number of machine-learned approaches see, for example, http://www.basistech.com/whitepapers/the-name-matching-you-need-EN.pdf