Here I discuss four interesting mathematical problems (mostly involving famous unsolved conjectures) of considerable interest, and that even high school kids can understand. For the data scientist, it gives an unique opportunity to test various techniques to either disprove or make progress on these problems. The field itself has been a source of constant innovation -- especially to develop distributed architectures, as well as HPC (high performance computing) and quantum computing to try to solve (to non avail so far) these very difficult yet basic problems.

And the data sets involved in these problems are incredibly massive and entirely free: it consists of all the integers, and real numbers! The first two problems have been addressed on Data Science Central (DSC) before, the two other ones are presented here on DSC for the first time. 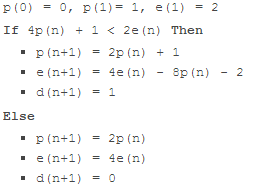 And for those interested in mathematical logic and measure theory, here is an interesting paradox, which somehow allows you to duplicate a ball made out of gold, into two balls, each having the same size as the original ball (though it does not double the mass.) It depends on the axiom of choice. The Banach–Tarski paradox is a theorem which states the following: Given a solid ball in 3‑dimensional space, there exists a decomposition of the ball into a finite number of disjoint subsets, which can then be put back together in a different way to yield two identical copies of the original ball. Indeed, the reassembly process involves only moving the pieces around and rotating them, without changing their shape. However, the pieces themselves are not "solids" in the usual sense, but infinite scatterings of points whose volumes are un-measurable.