One of the biggest threats to our world economy (outside of climate change, social inequality, unregulated proliferation of weapons and the rise of Terminators), is the retirement of the technician and engineering expertise that is necessary to keep our factories, hospitals, cities, trains, airports and other operational entities running effectively.  Deloitte’s 2018 skills gap in manufacturing study found that the skills gap may leave an estimated 2.4 million positions unfilled between 2018 and 2028, with a potential economic impact of $2.5 trillion worldwide (see Figure 1). 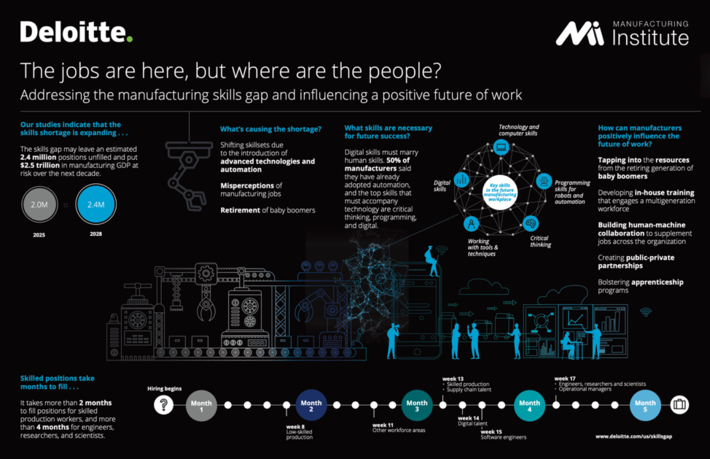 To address the epidemic retirement of technician and engineering expertise, organizations are relying upon knowledge management systems (Wiki’s, On-line forums, Video Content Management Systems) and training to capture and codify the static heuristics that these technicians and engineers use to keep operations running smoothly.  But advancements in digital technologies combined with the changing workforce demographics are working against these knowledge management and training efforts. The bottom line is that the working age population is leveling off and, in some scenarios, actually decreasing (see Figure 2). 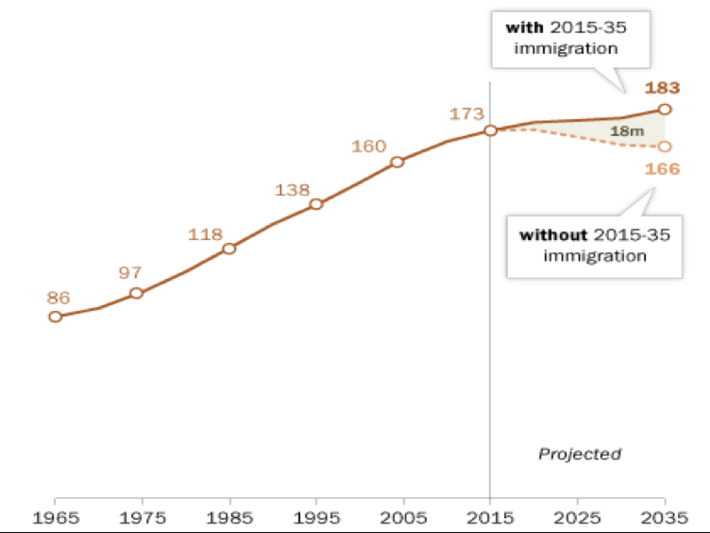 But instead of panicking about this dire situation, I’m going to propose that this is a once-in-a-generation opportunity to “think differently” about achieving operational excellent and not just “pave the cow path” with a solution that misses the bigger business, society and environment opportunity.  And as is typical in discussions like this, economics provides the answer. Unfortunately, economics throws a little wrinkle into the economic value curve inter-relationships, and that’s called the “Law of Diminishing Returns”.  The “Law of Diminishing Returns” states that as one input variable is increased, there is a point at which the marginal increase in output begins to decrease, holding all other inputs constant. At the point where the law sets in, the effectiveness of each additional unit of spend decreases (see Figure 4). 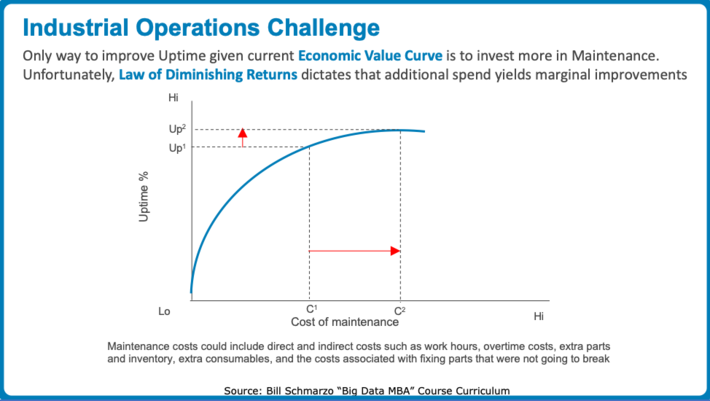 So, the key is to transform the economics value curve to get more outcomes with the same or less effort; that is, to increase the benefits (uptime, reliability, predictability, stability, satisfaction, revenue) while reducing the associated costs (maintenance, inventory, consumables, maintenance equipment, energy, water, staffing, training, hiring, overtime, waste, fraud) as depicted in Figure 5. In Figure 5, we are increasing uptime from Up1 to Up2 at the same maintenance costs.  We transform the economic value curve by leveraging new sources of customer usage, product performance and operational effectiveness data coupled with advanced analytics to get more output with less effort (cost).

Now imagine the opportunity to transform the Economic Value Curve across a wide variety of sometimes conflicting metrics such as increasing operational uptime while reducing maintenance costs while improving customer satisfaction while reducing inventory costs while improving fix-first-time effectiveness while optimizing maintenance equipment usage while…well, I think you get the point.

With the forthcoming shortage of technician and engineering experience, industrial organizations have an opportunity to re-engineer their operations. But instead of just hiring more technicians and training them on the static heuristic best practices gathered from the retiring subject matter experts, why not turn those heuristics into AI algorithms (math) that scale across all technicians, thereby turning all of your technicians into your best technicians (see Figure 6)? 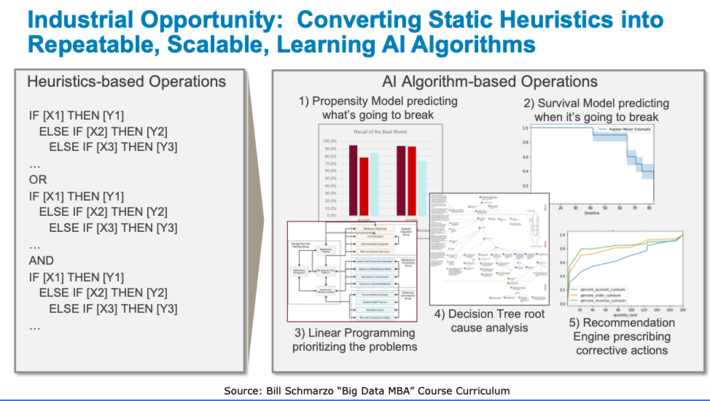 1) A Propensity Model that predicts what device is likely to break or experience significant performance degradation.  A propensity model is a statistical scorecard that is used to predict (codify) the operational behavior and performance of a device.

2) Survival Analysis that predicts when a device is going to break. Survival analysis is used to analyze the expected duration of time until one or more events happen such as a failure in mechanical systems.

3) Linear Programming (mathematical technique for maximizing a linear function across several variables) or Genetic Algorithms (method for solving both constrained and unconstrained optimization problems) that prioritizes the different operational tasks or actions.

4) A Decision Tree that performs root cause analysis. A decision tree is a decision support tool that uses a tree-like model of decisions and their possible consequences, including chance event outcomes, resource costs, and utility.

5) A Recommendation Engine that prescribes preventative or corrective actions. A recommendation engine analyzes available data to make suggestions as to what actions a technician or engineer should take to prevent operational problems or improve operational performance.

Why stop at just creating AI algorithm-based operations?  How about building upon those AI algorithms to drive automation…and eventually even autonomous?

An autonomous entity is an entity that can self-monitor, self-diagnose, self-maintain and self-learn without human intervention.  Autonomous entities leverage fail-safe environments (games, simulations) to create Rational AI Agents that operate and learn across a robust number of use cases within a dynamically changing environment without human intervention (see Figure 7). 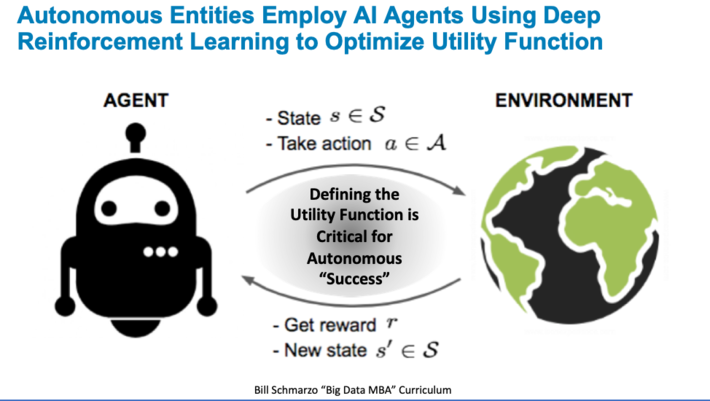 How this autonomous option plays out, given the retirement of the technicians and engineers with the deep experience, is that organizations can start with the existing static heuristics and leverage data science (AI / ML) to 1) validate the predictive accuracy of these heuristics so that 2) they can convert them into predictive algorithms.  Then once these heuristics are converted into predictive algorithms, then 3) prescriptive analytics can be created to identify, assess, score and recommend potential preventative, corrective or remedial actions.  Finally, if there is sufficient data and a fail-safe environment in which to train the Rational AI Agents (simulations, games, labs), then these prescriptive autonomation models can be converted into autonomous maintenance models – models that help entities to self-monitor, self-diagnose, self-fix and self-learn…without human intervention (see Figure 8). 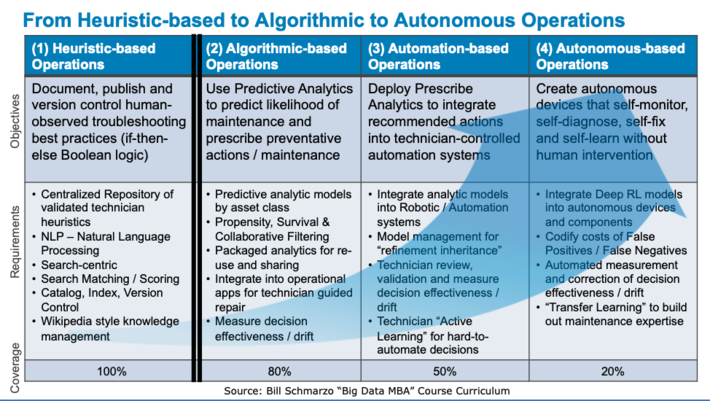 And while one cannot expect to create autonomous entities that cover 100% of an organization’s operational needs, the creation of autonomous entities in operational environments (ships, factory lines, trains, vehicles, distribution centers, etc.) can minimize the need to train 2.5 million new technicians and engineers, and leverage artificial intelligence and deep reinforcement learning to create learning systems that keep operational environments running more smoothly and more effectively than ever before at the lowest possible financial, operational, customer, environmental and societal costs.

The Deloitte study estimated that the technician and engineering skills gap may leave an estimated 2.4 million positions unfilled between 2018 and 2028, with a potential economic impact of $2.5 trillion worldwide.  And while organizations are madly scrambling to leverage knowledge management systems and training to fill that gap and keep operations running smoothly, these organizations are “just paving the cow path” and missing a once-in-a-generation opportunity to leverage the Economic Value Curve with AI-fueled autonomous entities to re-engineer their operational processes and business models.

New digital technologies (IoT, video, lidar, robotics, AR/AV, 5G) coupled with advanced analytics will enable organizations to create autonomous entities that not only reduce the need for human technicians and engineers, but radically transforms the sources of customer, product and operational value.

These organizations can embrace the economic value curve to digitally transform their business and operational models by converting human-observed static heuristics into AI algorithms that can drive automation and maybe even autonomous operations.

Time to think outside the box.  Instead of focusing on replicating yesterday’s operational best practices, grab the economic value curve by the throat and dramatically change how your organization identifies, captures and scales these new sources of operational value via autonomous capabilities.

Now take that you Terminators!