I once mentioned purchasing a machine designed to monitor and reduce sleep apnea.  Sleep apnea is when a person stops breathing while sleeping.  During a sleep study, I was found to have moderate sleep apnea.  Apart from its medical implications, sleep apnea is also a metric.  The machine determines when an instance should be recognized and counted.  However, the machine is incapable of associating events with the metric.  It cannot determine any contributing or mitigating factors.  This does not stop the medical profession from asserting relationships based on aggregate studies.  Such research seems destined to be disassociated from the quotidian events of individuals.  In contrast, the “crosswave differential algorithm” is designed to connect events to metrics.

Despite the dynamics in the preceding, in practice I am sensitive to issue of false positives and negatives due insufficient cases.  I typically make use of “event families,” which are events that are related: e.g. coffee; milk-coffee; coffee-decaf; afternoon-coffee; morning-coffee; coffee-sweetened-sugarcane; coffee-chilled.  These events are related in that coffee is involved.  If I were interested how coffee affects a metric, I would invoke the entire event family.  In this way, although there might be few cases of an event, it might still be possible to assert a reasonable course of action

Taking into account that actions lead to the further collection of data, reasonable actions even with undesirable outcomes contribute to the database of insights.  It is never necessary to do something unethical or unproductive merely for control purposes - such as using placebos or deliberately compromising the health of an organization.  The spectrum can be used almost like another sense.  I find myself almost forced to use it in relation to certain problems since it has become part of my reasoning process.

The original form of the spectrum was a vector bar image generated by an application called Tendril.  As the algorithm assigns differential values to each event, the events are categorized in terms of their “push” and “pull” characteristics - that is to say, their ability to worsen or improve a particular metric.  The events are handled as families.  The image below involves a family of different exercises and their impacts on breathing.  I call this type of rendering a “slider.”

Tendril - the research prototype that first made use of the algorithm - was eventually replaced by a more robust application call Elmira.  Elmira generated the data for all of the images below.  Rather than present percentages - of events in the family below ambient, at ambient, and over ambient - I decided to simply present all of the differential values in order - from highest to lowest.  When I mean “all,” I mean from all events - of which there might be hundreds or even thousands; but the items belonging to the family are flagged.  This technique makes it possible to examine the relative position of family members and consequently the bias of these members in relation to events more broadly.

When I use the term “positive bias” in relation to the differential spectrum, I do not mean that all of the events are positive.  I mean that on balance the events lean towards positive.  This leaning is evident on the image below.  I almost never use regular Tylenol.  I use the type intended for arthritis, which provides relief over an extended period of time.  The chart suggests that for me, incidents of apnea decline when I take Tylenol.  I normally take this medication to reduce back pain - a nagging pain that I have had for many decades.  (It’s a funny story what I think brought about the pain.  I save it for some other blog.)  I do ponder whether this pain might be capable of triggering breathing problems when I sleep.  Since I use Tylenol routinely, I consider the guidance of the chart fairly worthwhile.  By no means am I suggesting that Tylenol can or should be used to treat sleep apnea.  My objective here is merely to share my story. The term “negative bias” means that events lean to the right where the events are negative.  I consider myself a fairly responsible individual who exhibits diverse behaviours.  The likelihood of me coming across a clear negative bias seems small on account of personal avoidance.  However, I was able to find an event family that demonstrates a negative bias as shown below.  I would have to collect more data to determine whether this distribution is significant or pure happenstance.  Life as we know it would of course be impossible without Vitamin B12.  The question is whether sizeable supplemental doses contribute in some way to my sleep apnea.  I will find the answer at some point in time in the future without much effort.  Using the algorithm isn’t a matter of testing to gain experimental data but rather living and taking note of my experiences. 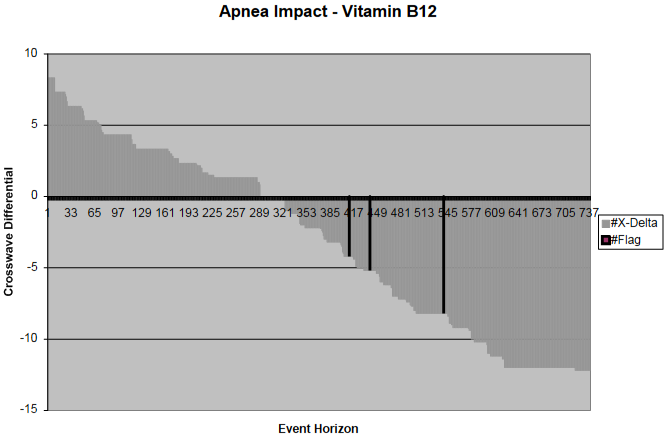 I came to wonder whether sleep apnea can bring about more sleep apnea.  This is something that I can actually check.  The answer apparently is “not for me” as indicated on the image below.  There is lots of distribution both above and below the event horizontal or horizon.  In this case, I used the sleep apnea from the previous day as input - as an event for the current day.  I consider the lack of kinetic convection in the data interesting.  It suggests that my apnea is not chronic.  (I would expect a chronic condition to exhibit greater fluidity from one day to the next.) 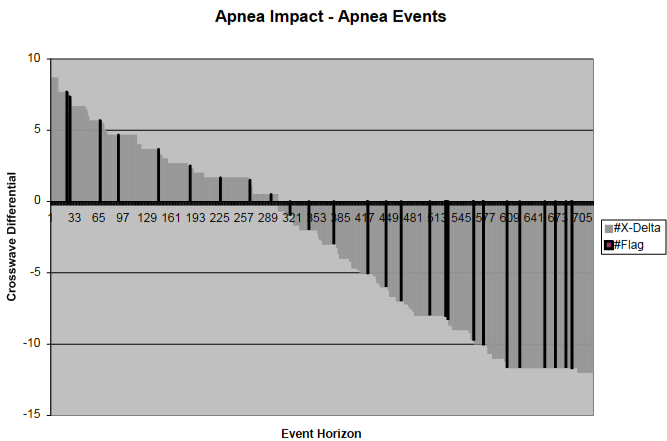 It is important to interpret the charts as a tool to enable research.  The chart below seems to show that cherries (specifically, dark frozen cherries) are suspicious.  On one hand, most of the events seem to show a negative bias: i.e. they seem adversely associated with my sleep apnea.  On the other hand, there is one event that shows a positive bias.  What is a person to do?  Well, I check the nature of the underlying events.  The event having a positive bias is for cherries eaten early in the day.  The rest of the events are for cherries eaten in the evening.  For the purpose of avoiding sleep apnea, I might consider eating cherries early rather than late in the day.  If after eating the cherries earlier the apnea remains, the event exhibiting positivity will correct on its own.  After evaluating the chart, it would be reasonable to infer that eating cherries in the evening might worsen my apnea.  The bias is determined by analysis, which is why I call it “evaluative bias.” Segmentation and Separation of Control Events

How does a person determine causality?  I know that in tort cases, it is sometimes necessary to demonstrate that an individual caused an event:  e.g. a gardener caused a family’s dog to loose a limb.  However, in a complex integrated system, ecosystemic dynamics might be present:  i.e. since everything is interconnected, it is difficult to prove and problematic to accept that one single thing caused another specific thing to happen.  The principle of an ecosystem is particularly relevant when efforts are made to change metrics by modifying events.  It is in this scenario where not just the event family but rather the event environment has to be considered.  I am not talking about the naturally occurring events in isolation but also the “control events.”  When controls are deployed in the hopes of changing metrics, the control events should be incorporated into the event data.  However, it is also necessary to consider how to interpret or distinguish between original (natural) and control events.

For the sake of argument, the prefix “control-” could be added to the event symbol or tag thereby defining it as a control event.  But would people really settle for this kind of scenario - simply differentiating between control and original events?  Questions might be raised on where a control is from, when the control was implemented, and what the intended outcome was.  If the control symbol doesn’t itself contain information, details would have to be stored elsewhere.  It is therefore necessary to “map out” the progression of control and maintain a cohesive method of recollection.

Once controls are implemented, it is necessary to determine whether to segment or separate the control events, to keep the events together, or to selectively keep some control and original events together.  It is reasonable to assume that the impact of a control unfolds over time.  It is possible to render a 3-dimensional distribution of differentials - i.e. a differential spectrum for each time period - where a specific colour is assigned to each event or event family.  This rendering would allow researchers to examine the progression of change as control events are invoked.  Sadly I don’t have such an image to share since my computer is already struggling to generate the data for single slides.

So this concludes my discussion on the differential spectrum, which I use rather frequently these days.  In order to make use of this presentation format, it is necessary to also apply the crosswave differential algorithm, which I have mentioned in my blogs since developing it a number of years ago.  There are no commercial applications of this algorithm; and the only documentation that exists about it can be found in my blogs.

Conceptually speaking, the peculiarity of this algorithm is that it uses ambient as the control.  I make no effort to create a test for a specific variables - this being what I regard as a more traditional scientific approach.  The algorithm is compatible with a use of data drawn from day-to-day experiences.  For example, I make no deliberate attempt to check for the impact of cherries.  I just record what I do and eat during the day.  The big question is an issue of recognition, whether or not I take into account something that might be important or critical in the analysis.  For example, I agree that weight might be important.  But I don't actually weigh myself regularly.  However, all thing being the same (a huge assumption, I appreciate), given that the normalcy resulting from such variations become part of ambient, how does the inclusion or exclusion of a particular treatment or behaviour affect the metrics?  At times the assumption cannot or should be made.  So you are absolutely correct that ontological recognition of events is an extremely important concern, and at this point we might have to link other disciplines to the cause.  Critical thinking would be important as humans sometimes take as ambient or normal things that are actually radical - for example the enormous disparities in wealth and resources between the rich and poor and their event consequences.

I suspect finding a control event for chronic conditions would be difficult since, it seems, they appear to be the cumulative result of several factors.  Sleep apnea for example could possibly be caused by too much weight gain leading to obstructive apnea.  If left untreated there is a possibility that enough brain damage may occur leading to central apnea - apnea caused by misfiring brain signals.  Consider all the pathways and activities that could lead to excessive weight gain.  If the first recorded apnea is chosen as control, then you've missed all kinds of already 'uncharted' events or data that would probably be a better representation of a control, i.e. the first apnea ever, or whatever event that would effectively be the opposite of apnea.