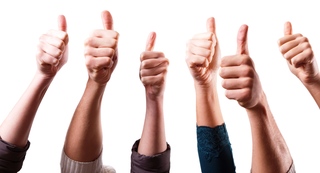 It’s that time of the year again when the major surveys come out from O’Reilly, GlassDoor, and Burtch Works that tell us how we’re doing.  Well, no surprise, take a lap Data Scientists, you’re still number one, or darn close.

As our industry matures more surveys are completed and the detail becomes greater.  Plus there’s now enough year-over-year data to see some solid trends.  In fact from these three great companies there’s way too much information to detail here and we had to work pretty hard to pick and choose the most interesting bits.

Let’s start with Glassdoor and let’s start by fessing up that there’s a little apples and oranges here.  Their 2016 survey that we wrote about in February is their official ‘best job in America’ survey and the one we’re reviewing here is their new ‘Best Jobs for Work/Life Balance’ which just came out.

As Best Job in America we got 4.7 out of 5.0 to tie for first place (with Tax Managers???).  In this new Work/Life Balance survey, Data Scientists scored 4.0 tieing with six other job titles like Strategy Manager, Recruiting Coordinator, and Devops Engineer.  We were right behind the two top jobs at 4.1, Corporate Recruiters and UX Designers.  What makes me declare victory despite this niggling shortfall is Data Scientists had the higherst median salary of all nine jobs at 4.0/4.1 at $112,000.  In most cases by a substantial margin.  Good pay and we get to enjoy it too!

Where Are the Jobs and What Do They Pay

The always insightful O’Reilly 2016 Data Science Salary Survey with results through August and over 900 respondents has just been released.  Looking just at the US respondents, O’Reilly reports a median base salary of $106,000.  That’s a tad lower than reported by Glassdoor but given the small n of both surveys it looks consistent to us.  Here’s their main takeaway for the US. The distribution of jobs is about what we imagined it would be and supports our long held thesis that there are two distinct and quite different data science job markets in the US.

One we’ve named the Big Web User Market is comprised of companies who interact with their large B2C customer base almost exclusively through the internet.  They cover the waterfront from search, to ecommerce, social media, dating sites, MOOGs, and content sites.  Think Google, Amazon, eHarmony, Twitter, Yahoo, and World of Warcraft.

What these companies have in common is that they have exploited the newest DS tools that are rapidly arising from our new abilities in ML on NoSQL:  (recommenders, NLP, dynamic pricing optimizers, image, text, and speech processing, IoT, and deep learning).

Working with these companies means that you’ll be working at the cutting edge of data science since they rely on those innovation to bind their customers.  Data Scientists in this market have more experience, are likely to be specialists, and as a result are better compensated.  You’ll work directly in code and that code will be directly incorporated into the product that is the company.  You’ll also have about a 90% probability of living in San Francisco, Los Angeles, Seattle, or New York because frankly that’s where those jobs are.  To my mind that explains pretty much all of the bump in median salary ascribed to the west coast.

The second and by far the largest market is the Core Data Science Market.  This is comprised of any enterprise with a big B2C base plus some special cases like manufacturing where demand forecasting in the supply chain is critical.  These companies cover the waterfront from financial services to ecommerce, utilities, healthcare, telecom, education, and government meaning that in this market you can live and work in just about any major metro.  It also points to the fact that about 80% of the core data science market work is in predicting consumer behavior: why they come, why they stay, why they go, what will they buy next, what will they buy the most of.

How Much Will I Make To Start?

When I’m talking to aspiring young data scientists it’s no secret that part of the draw are the big salaries.  Of course just like any profession you grow in value with experience so the salary you make starting out, while well above average, is not likely to be the medians reported here.

O’Reilly relates salary bands to years of experience to give you a good idea of what that progression means.

What’s equally interesting and certainly expected is that 42% of us have less than 5 years experience and 64% have less that 8 years.  This reflects the fast growth of our profession as well as the number of newcomers becoming qualified through the many new Masters programs or MOOCs to satisfy the shortage of candidates for hire.

One of the major problems we’ve had as a profession is the lack of standardized job titles.  Aside from calling someone a ‘junior’ there’s no standard nomenclature or agreement on how to differentiate folks who are early in their careers from those who are more experienced or even involved in the management of other data scientists.

Further there’s always been this tension just below the surface about who actually gets to call themselves a ‘data scientist’.  I’m not going to touch that one, besides we haven’t up to now even had an alternative title that might be appropriate.

Well enter Burtch Works, an executive recruiting company with a focus on data science and a multi-year history of doing in-depth surveys with good sample sizes.  To their credit, these are all in-person interviews not just self-reported data and Burtch Works deserves some credit here.

They actually produce two separate studies, one for “Data Scientists” and one for a group they consider more junior by skills (not necessarily by experience) which they call “Predictive Analytic Professionals” (PAPs).

Before you get too excited that someone wants to take away your data scientist title consider that the skills the attribute to the PAPs are quite substantial.  According to the 2016 Burtch Works Study “Salaries of Predictive Analytic Professionals”, PAPs are:

Working with vast amounts of data (mostly structured), building models, and prescribing action.  They come from formal training typically in one of the new Masters programs or from MOOCs, and work regularly with SQL, R, and SAS.  They may also work with Python, Hive, Hadoop, Spark, and data viz.

Sounds to me very much like the ‘Core’ data science market.

Where Burtch Works draws the line in their 2016 Study “2016 Salaries of Data Scientists” is this:

DS have all the skills of PAPs plus they have more extensive coding and programming skills; they can work on unstructured and streaming data utilizing a variety of data infrastructures; they can work on every stage of the data and analytic life cycle, and are more likely to have come from a computer science background.

To make their studies even more rich they solve the senior versus junior problem by dividing their results into six traunches.

This type of detail is a real breakthrough for understanding career progression but obviously too much detail to display here.  Here are just a few of the interesting highlights. 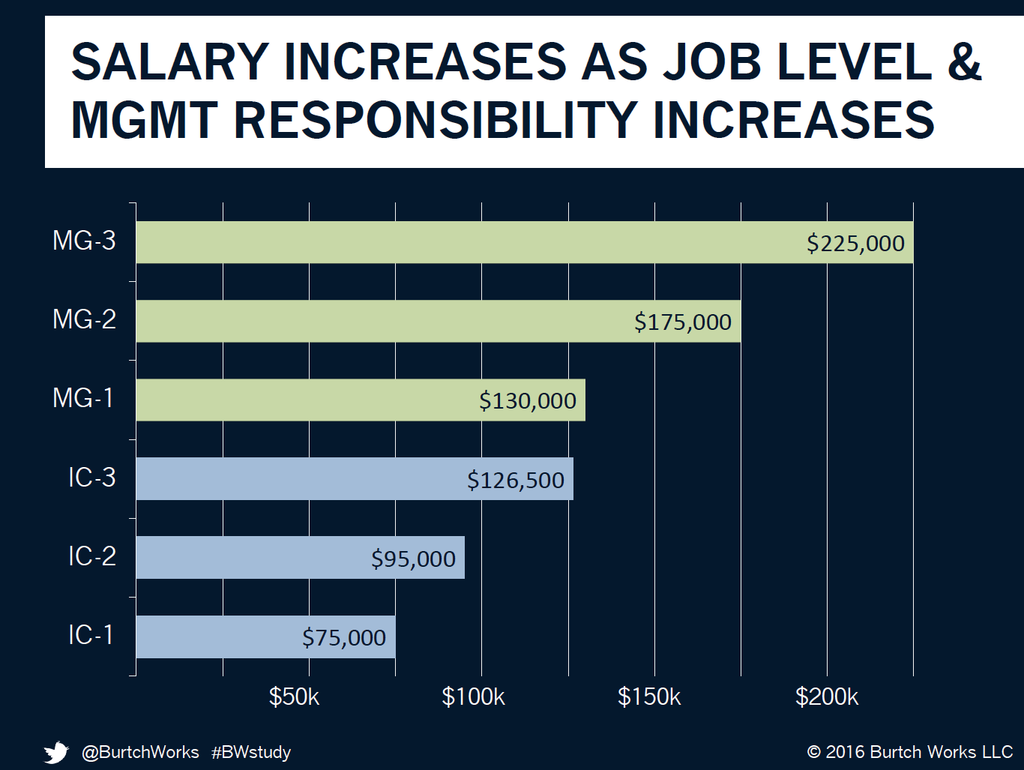 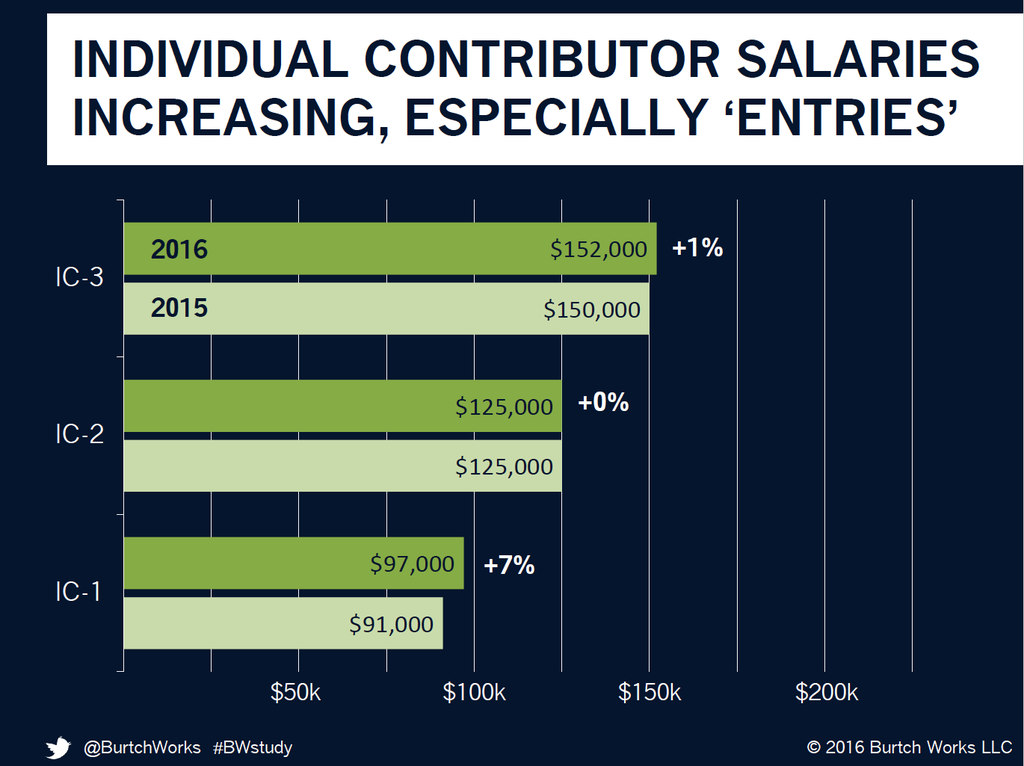 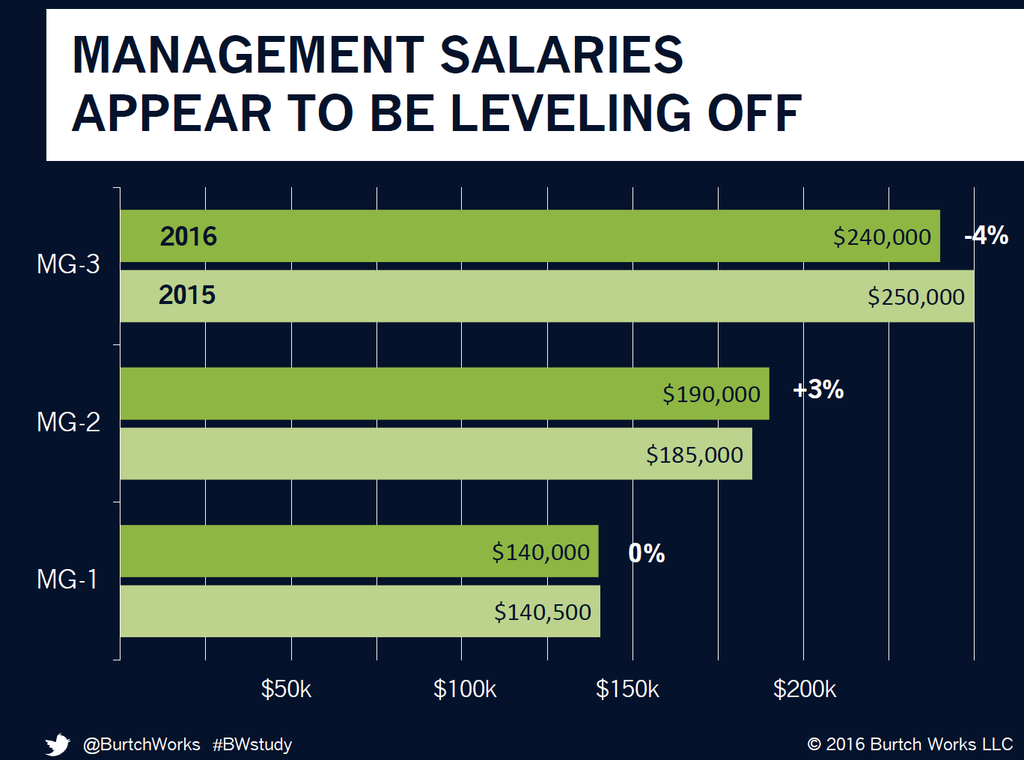 What you may find surprising is that the salary differences for PAPs versus Data Scientists at all levels are remarkably similar and while there is premium for the Data Scientist it’s not as large as you might have thought.

What’s not surprising is that all these positions tend to be eligible for bonuses and that job tenure is a fairly short 2.3 years reflecting the fact that good quality folks in all these categories are being recruited away and getting strong increases for their move.

Among all this wealth of data I’ll limit myself to one more observation.  Although there are still about three men for every woman in our profession we have substantial pay parity. 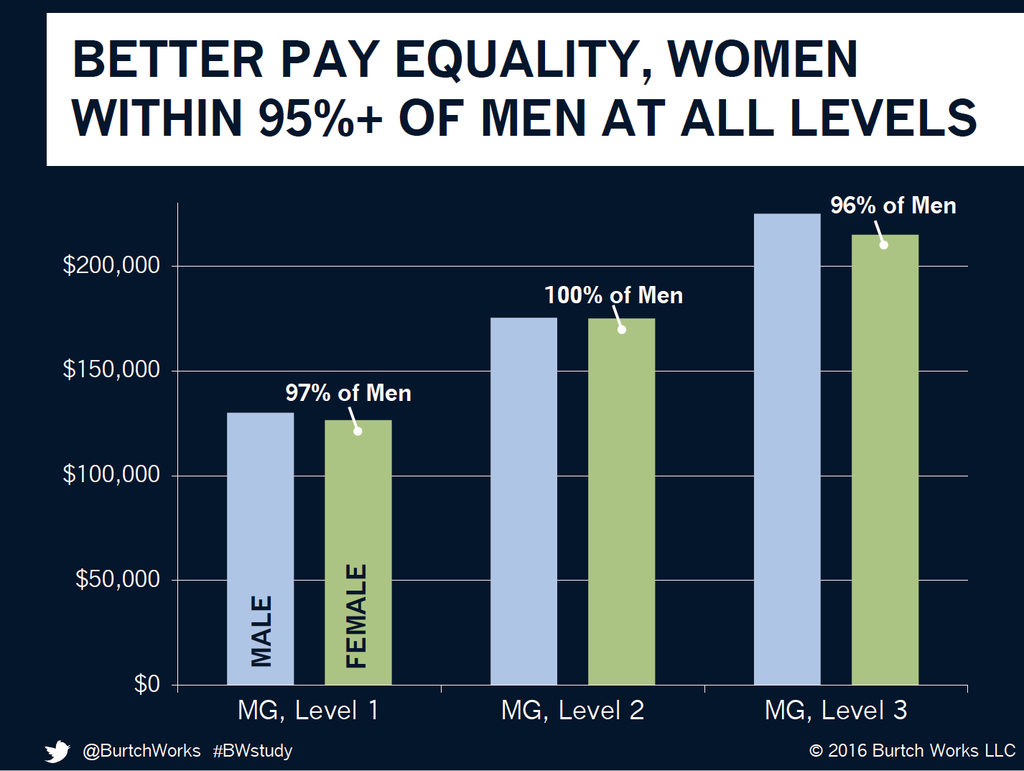 Professionally this continues to be all good news.  I don’t imagine anyone will quibble with the levels of experience traunches that Burtch Works has used.  I am however very interested to know what readers think of the differentiating between “Data Scientists”  and “Predictive Analytic Professionals”.  Leave us a comment below.