BusinessWeek magazine, as always, published an exceptional article titled “Five Management Lessons the Apollo Moon Landing Taught Us”. So, in honor of the 50thanniversary of the moon landing (unless you are a conspiracy theorist who believes the entire landing was staged like that OJ Simpson movie “Capricorn One”), let me share what Data Science teams can learn from the moon landing mission (since many data science projects do seem like a moon shot).

Note:  while I am focused specifically on Data Science teams, these 5 Moon Landing lessons can easily apply to all types of teams.

Moon Landing Lesson #1: Have a Clear Objective and Focus on the Ends Not the Means

“President John F. Kennedy vastly simplified NASA’s job with his May 25, 1961 address to Congress committing to “the goal, before this decade is out, of landing a man on the moon and returning him safely to Earth.” From then on, any decision was made by whether it would aid or impede the agency in meeting that deadline. Experiments that were too bulky or heavy were shelved, however valuable they might have been. Technologies that were superior but not ready for deployment were set aside for later.”

Data Science Take-away:I wish the management teams with whom I work had that level of focus. Tell me, how many data science projects with which you are involved start with the assumption that you are going to use a Deep Learning or Reinforcement Learning methodology? It isn’t just about having a “clear objective”, but a willingness to let go of the unproven and shiny things that “shagify” us in trying to cut corners to achieve that objective, and focusing on the ends not the means. “In any large organization there is pressure to squelch dissent. That can be deadly, as it was for NASA in the two space shuttle failures, each of which killed all seven crew members. Challenger broke up 73 seconds into flight in 1986; Columbia disintegrated on reentry in 2003. Leading up to both tragedies, ‘Engineers grew concerned about a technical problem they did not fully understand, but they could not make a quantitative case’ and were consequently ignored.”

Data Science Take-away:  It’s okay to disagree. In fact, multiple perspectives are critical to deriving the best solution (and avoiding GroupThink[1]). But ultimately everyone must commit to a plan. Passive-aggressive behaviors doom more projects than incompetent project management. All projects and decisions have to harness and balance dissent.  Just think of the challenges getting the entire family to decide where to go on vacation or where to go for dinner. 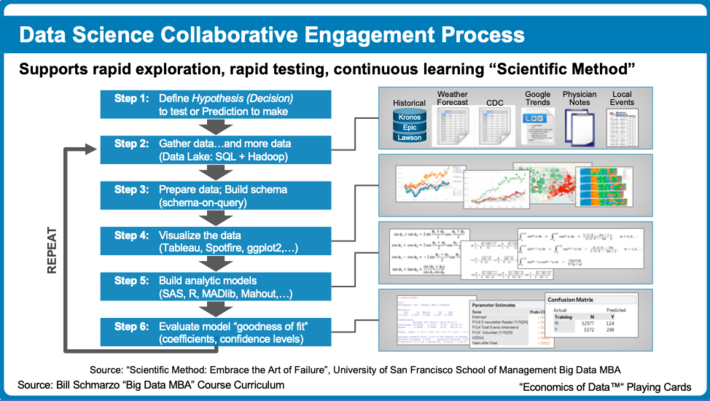 “With so many players involved, turf wars were unavoidable. NASA Administrator James Webb was a blustery North Carolina Democrat who’d come of political age during the New Deal. He coined the phrase Space Age Management to describe how he tried to manage conflicts and ensure final decisions were made by headquarters. ‘Personal relationships and sensitivity to the total environment are essential parts of leadership responsibilities if the system is to work at all.’”

Data Science take-away: Delegate to the lowest part of the organization or the team where the timeliness of the situational assessment meets operational knowledge. Don’t “delegate up” to someone who has less knowledge of the situation.  Ultimately that will just delay the decision for little if any gain.

Empower your team to make the necessary decisions and be tolerant of “intelligent” mistakes; that is, mistakes where the proper assumptions and consequences were considered, and other options contemplated.  And be sure to document these assumptions and considerations before the action or decision is taken, so the entire team can review afterwards what worked, what didn’t work, and why. Data science is all about learning from mistakes because that’s the only way to push the envelope! As the article states: “Failure was as instructive as success.” 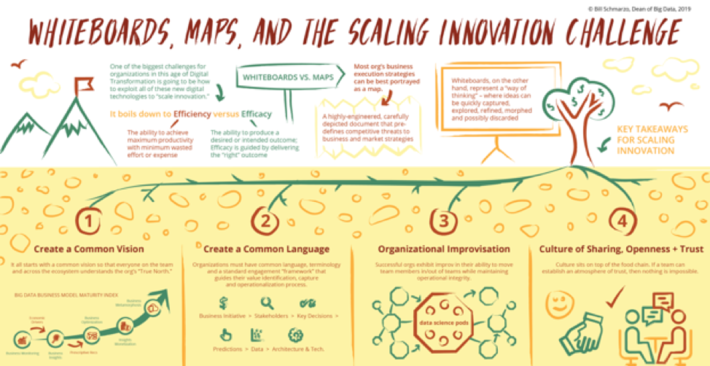 “What looks clunky and awkward to an outsider may appear elegant—i.e., efficient, effective—to an engineer. The lunar module was angular because there is no atmosphere on the moon, so streamlining was superfluous. Form followed function. Likewise, the tininess of Apollo 11’s payload in comparison to the hugeness of the rocket engines was dictated by the difficulty of escaping from Earth’s gravity. It was once calculated that giving the astronauts one more 8-ounce shaver would require adding 150 pounds of fuel. There was no sense even trying to build a rocket that would come down looking the same as it went up.”

Data Science Take-away: Always go for the simpler model as it will be easier to explain and debug.  Also, understand the fundamental differences between complexity versus complicated. Complexity occurs when the number of interactions between inter-related components increases dramatically and the ripple effect of these interdependencies can quickly create unpredi....

“Making stuff up on the fly is not in anyone’s manual, but sometimes it’s essential. The need for grace under pressure is why military pilots were often chosen as astronauts. As the Eagle was coming in for a landing, its onboard guidance computer started flashing warnings. The underpowered computer was getting overloaded by spurious data. Buzz Aldrin and Mission Control quickly nailed the solution: Reduce the strain on the itsy-bitsy machine by asking for navigation data from Houston instead. And then ignore the alarms.”

Data Science Take-away:  Organizational improvisation is critical for team success.  As I discussed in the blog "Scaling Innovation:  Whiteboards versus Maps", successful organizations exhibit organizational “improvisation” in their ability to move team members in and out of teams while maintaining operational integrity. 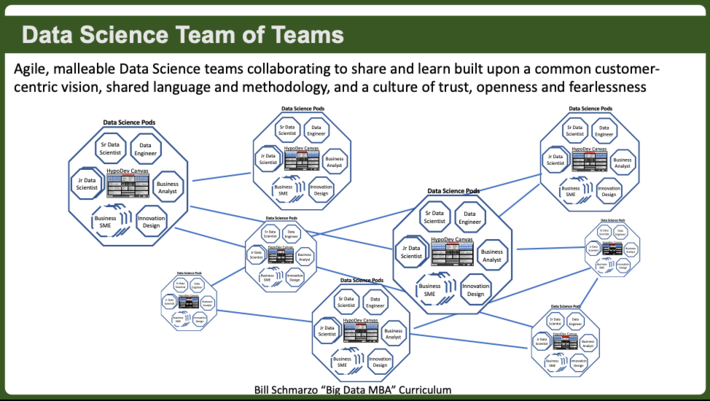 In today’s political climate, I’m not sure that our leaders could ever rally to put a man back on the moon.  However, that should not prevent organizations from embracing the “moon shot” type of projects that ultimately can lead to radical business transformation. It just requires that organizations do a few things very well including: By the way, I’m happy to announce the release of my 3rd book: "The Art of Thinking Like A Data Scientist”. This book is designed to be a workbook – a pragmatic tool that you can use to help your organization leverage data and analytics to power your business and operational models. The book is jammed with templates, worksheets, examples and hands-on exercises, all composed to help reinforce and deploy the fundamental concepts of “Thinking Like A Data Scientist.”

[1] GroupThink is the practice of thinking or making decisions as a group in a way that discourages creativity or individual responsibility.