Please email at ajit.jaokar at futuretext.com if you are interested in joining the course.

This new post focus on continuous improvement, following the design and deployment of the architecture and the model.

The importance of continuous improvement in the methodology is due to several categories of factors.

The first category of factors is the fast evolving nature of both data science and IoT. There are new algorithms, techniques and tools that are being developed and it is interesting to capitalize on those evolutions.

The second category is the problem itself. The problem solved might also evolve, therefore, the model that has been build to solve it will need to be reviewed and adjusted.

The third category is due to the nature of the IoT devices. As explained in the book Enterprise IoT (Enterprise IoT, Rishi M Bhatnagar; Jim Morrish; Frank Puhlmann; Dirk Slama. Published by O’Reilly, 2015), network devices (the things of IoT) can be upgraded through software regularly. While hardware is unchanged for a certain period of time, software gets updated often, bringing new capabilities to the devices, which can be used to solve the problem defined initially.

This continuous improvement phase is split into four activities:

This phase is represented in the following figure. It is a very liberal adaptation of the Deming Wheel (Plan - Do - Check - Act, see here and here). 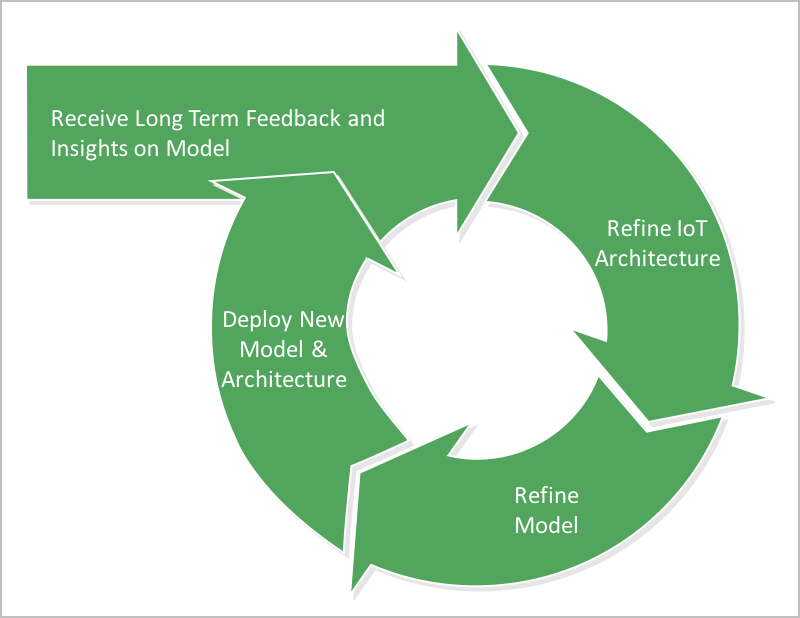 Given the categories of factors listed above, the rate of review to conduct the improvement activities is very specific to those factors. For instance, if the methodology has been implemented in an agile way the rate of review should be really fast, since we are more talking about iterations in the agile process than real continuous improvement.

Whether we decide to revise the model on a regular period or when a given event occurs (often an unexpected result / behavior), we need to collect information on the current state. In the context of data science for IoT, this will mean collecting data on the output (i.e. the results of the predictions made by the model), the input (the data used by the model) and the real outcome (i.e. real life, not the model results).

Whatever the rationale behind the continuous improvement process, collecting this data ensures that we have a sound foundation for reviewing the work done previously, and construct a new dataset.
Simple exploratory analysis with this newly formed dataset might be useful to lead to some clues as to the current performance of the model.

In addition to this collection, it is important to collect information from the users of the model, they may have additional elements to add to the process. For instance, their use of the model may have changed, or the business environment they are evolving within may be more dynamic than initially assumed.

Then, as explained above, there may be new elements to take into consideration with regards to algorithms, techniques and tools. For instance, we can cite (not exhaustive):

After the collection of inputs and data, we apply a similar sequence as the one  described in the previous post:

In the first case, this will depend on whether the devices have been updated to provide additional services and data streams. For instance a device may have sensors that were not initially programmed in its firmware, like an industrial device initially providing only temperature information, which is upgraded to provide pressure in addition of temperature. Also, the devices could now be able to handle some of the computation by themselves, which they were not able to do initially (i.e. like on a smartphone, adding or updating an application). In all cases, this will mean that new data will be available for use in the model.

In the previous step, one of the element was to collect a new dataset for further analysis. In this phase, we may have added data streams from the devices or from the edge. So, due to this, it might be necessary to refine or rebuild the dataset using this new data.

The implications of changing the architecture can be far reaching, and doing so should be done with care, otherwise we may not be doing continuous improvement but we have to start from scratch instead. The level of effort implied by the change of architecture should be assessed to ensure that it stays manageable. Otherwise, it might be better to start from scratch (i.e. defining the problem).

When the architecture has been reviewed and adjusted, then the model needs to be reviewed to take into consideration the potential changes:

This list is by no means exhaustive, but for all these reasons we need to re-analyze the problem at hand and rework on the model, using the new dataset that has been created (either in the first phase or in the second phase depending on whether we have additional data in the data streams).

Using this dataset, the same activities as the ones described in the previous post are used:

We won’t go through again here, just reminding that the model should be assess both from a statistical point of view (minimizing bias and variance and trading-off precision and recall) and that it can indeed solve the problem (impact on the KPIs we have defined).

For this second case (solving the problem), the KPIs may have changed both in terms of target and in terms of which KPIs to address.

This phase is about improving the model and the architecture designed initially, whether it was conceived as a finished project or as a first step in an iterative way of working (i.e. Agile).
However it is not designed at replacing the previously build model and architecture, only at evolving and improving it. So care should be taken as to what type of changes are introduced, specifically in the architecture.

Depending on the context, there are several elements that can drive the evolution, we noted several, such as:

In upcoming posts, we will explore the different phases in more details and look at potential deliverables for each of them.