Contributed by Rob Castellano. He  is currently in the NYC Data Science Academy 12 week full time Data Science Bootcamp program taking place between April 11th to July 1st, 2016. This post is based on his second class project - Shiny visualization (due on the 4th week of the program).

One of my favorite things about living in New York is its dazzling array of cultural institutions. With world-class theatre, museums, performance art, galleries, and even zoos, there is something for everyone. Even as someone who has lived in New York for several years (and in the surrounding area for even longer), these myriad of choices can be overwhelming--I can only imagine how tourists feel!

Have fun and explore using the app here!

Note: This app was built using R Shiny. All code can be found on GitHub.

The institutions in the app are all of those listed by the New York City Department of Cultural Affairs. Their directory is available via NYC Open Data. There are just under 2000 institutions that are grouped into 20 disciplines that include "Dance", "Museums", "Literature", and "Science". (A few institutions do not have a discipline not listed.) All of the disciplines are shown below and serve as choices for some features of the app.

The app has three main components that I will outline below.

You can also click on a given institution to obtain its information. 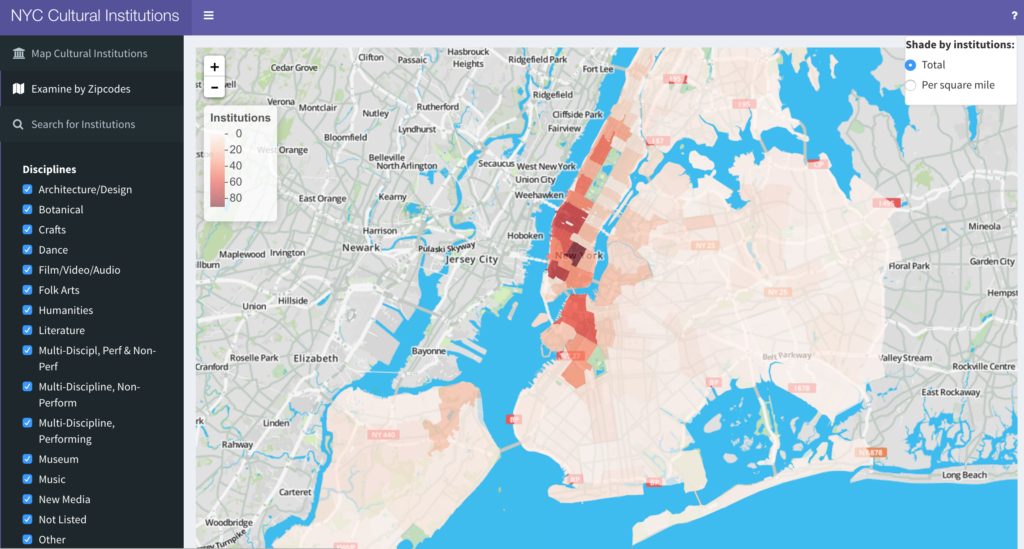 One can also click on a zip code to get the exact number of institutions selected that it has. The zip code 11215 has 37 total institutions. 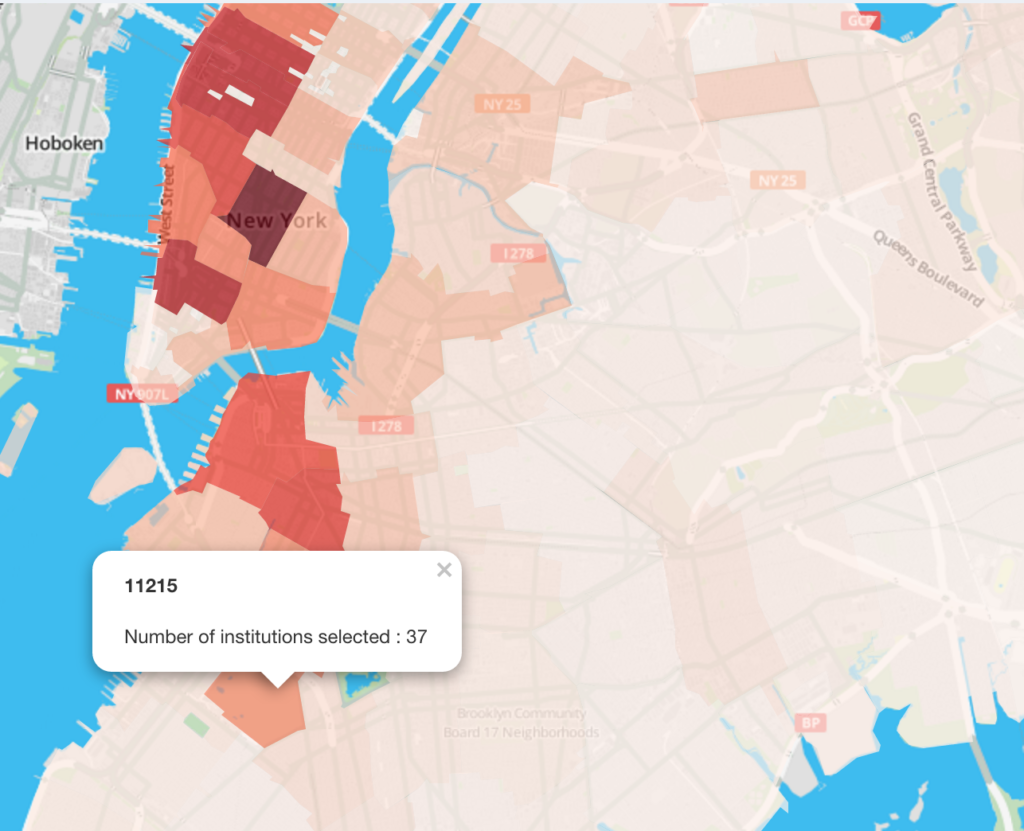 What Can Be Learned?

This app can be used to explore different aspects of culture in New York. Just zoom in on your neighborhoods (or you're friend's neighborhood if you're just visiting) and discover institutions you didn't even know existed.

The zip code map can be used to glean information about the city as a whole. By looking at the map of total number of all institutions by zip code we see that, unsurprisingly, Manhattan has the largest concentration of institutions. Brooklyn and Queens neighborhoods near the East River, such as Long Island City, Williamsburg, Downtown Brooklyn, and Park Slope, as well as the North Shore of Staten Island are also well represented. However, we can see that even zip codes in eastern Queens have over 1 institution per square mile.

The West Side of Manhattan has many more institutions than the East Side. I was surprised to see that despite being home to "Museum Mile" and some of New York's best known museums, the Upper East Side does not have as many institutions, or even museums, as other parts of Manhattan.

There is a lot more to learn from the information in this app. Just by exploring, one can learn things like the fact that Ditmas Park is home to several theatre institutions. I hope you find this post and app interesting. Please comment with any thoughts, suggestions, or insights you discover!