Choosing Between MEAN Or MERN Stack for Web Development 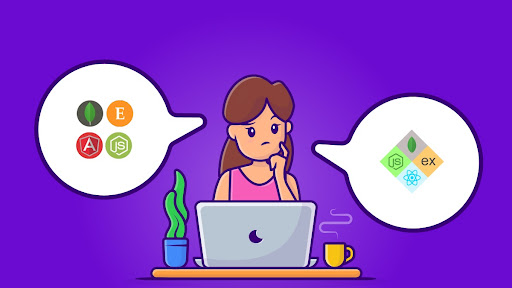 Looking for a solid web development stack but aren't sure between MEAN and MERN? Don't worry; this article will help you decide.

MEAN and MERN both have advantages and disadvantages that make them suitable for different types of projects. Both of these options offer good functionality.

As per Statista, 40.1% of developers were reported to use React as of 2021, the highest share of web development languages. 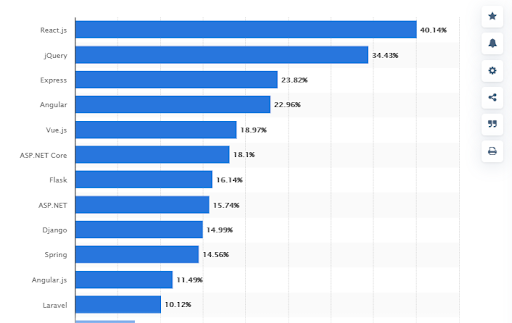 So, In this blog post, we'll compare their features in detail side-by-side, helping you decide which is better suited for your web development needs.

But before we move on to compare them, I would like to brief you about these two technologies.

What is a MEAN Stack? A Brief Introduction

The MEAN stack is a JavaScript-based web application development platform, and it's a set of technologies used to create robust web applications. Moreover, the acronym stands for MongoDB, ExpressJS, AngularJS, and Node.js.

They are all open-source projects available in free versions on the internet and backed by popular companies contributing to their growth and improvement.

What is a MERN Stack? A Brief Intro 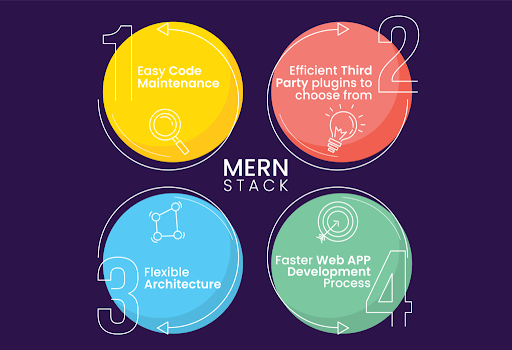 The MERN stack is a full-stack JavaScript web development platform. It is the acronym for MongoDB, Express, React, and Node.js. The stack includes MongoDB for data storage, Express.js as a web application framework for Node.js, React.js as a front-end library, and a Node.js server to manage server-side operations.

Plus, with the help of mern stack development companies, the MERN stack offers a fast, intuitive way to build scalable web applications with JavaScript on the backend.

Now, have a look at the quick comparison of Mean vs. Mern.

The MEAN stack has a steep learning curve because it is a pre-configured framework, whereas you can more easily use the MERN stack due to its simplicity. React also offers richer documentation than Angular, making learning more accessible. However, some MEAN stack features like Mongoose, which provides object modeling and validation, take some time to master.

Using third-party libraries is an excellent consideration for developing apps and websites at a business level.

MEAN contains functionality for HTTP requests and backend connections in its corner, making it possible without programming knowledge or experience.

However, React provides other libraries for similar purposes. MEAN can take help from third parties to include plug-and-play extensions, while MERN requires additional settings for the like.

Mean is more popular than Mern as it has been updated recently and used by big companies such as Twitter. You can use it to build both desktop and mobile applications. 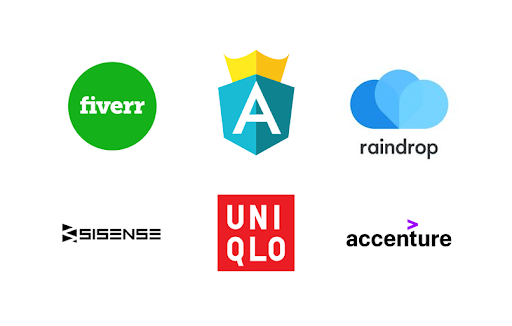 Airbnb also chose MERN stack to build its mobile app, and so did the Chinese company Meituan. These companies have been able to meet their objectives using the MERN stack.

On the other hand, MERN is also becoming more popular thanks to the advancements in its design. With more configuration options, you can customize the webpage as per needs.

While choosing the right technology, i.e., Mean vs. Mern, one must keep performance in mind. The MEAN stack has a slightly better performance than the MERN stack because it is a pre-configured framework, whereas the MERN stack requires you to configure things independently through mean stack companies.

In addition, React, which is one of the core dependencies of the MERN stack, uses Virtual DOM instead of the native DOM, which generally results in a lot of unnecessary rendering.

It will help if you keep up-to-date architecture to design an app on a business level. The architecture of Mean includes both front-end and backend projects, whereas MERN only has React JS projects. The view layer in Mean uses templates, whereas MERN relies on JSX to render HTML templates.

MEAN stack is considered more suitable for large-scale development projects, but it lacks flexibility in project structure or scaling down. On the other hand, MERN is a very flexible solution ideal for small-scale projects and large ones.

On the other hand, the two-way data-binding offered by Angular is a more practical approach if you are running a small project. You can also hire a MEAN developer to help you leverage this completely.

The Angular app testing experience is different from React testing, which usually affects your selection for the MEAN stack development. Plus, you can efficiently test Angular applications by using tools such as Jasmine.

Scalability is the measure of how fast an application or system can grow or adapt to increasing demand. It is the ability to use a system beyond its current capacity through upgrades, replication, and clustering. So, you should evaluate scalability before you use a tool for your project.

MEAN stack is considered to be more secure than MERN Stack. Mean is made up of scalable frameworks, like Node.js and Angular, which support JSON Web Token (JWT).

You can encrypt this data format with algorithms to ensure no unauthorized access to any resource that might contain sensitive data. You can also implement cookie-based sessions instead of server-side sessions to keep the session data on the client side.

MERN Stack, on the other hand, doesn't have security as its primary focus. It focuses on creating an API backend with Express or Hapi, so it's fast and straightforward to execute operations. MERN provides many authentication methods, but all of them are vulnerable to CSRF attacks.

The MEAN stack has a very active and vibrant community which means that you will find solutions to almost any problem related to the MEAN stack. On the other hand, the MERN stack is still in its early stage of development, so it does not possess as many resources as the MEAN stack.

So, it was all about which one to choose, i.e., Mean or Mern. The MEAN stack is an excellent choice for larger-scale projects and has better performance than the MERN stack.

However, if you're eyeing something more flexible, suitable for both small-scale development and large-scale ones, then MERN could be the right choice.

Both have their pros and cons regarding testing, security, scalability, and community support. So, depending on your project requirements, you can choose Mean or Mern for your next project.

It is worth remembering that the creation of a website to support the company's image should be taken seriously, set up their online presence. A well-designed site in visual and technical terms will cause customers to have more confidence than a web resource consisting of a couple of primitive pages and hosted on a free hosting.

Information is pretty good and impressed me a lot. This article is quite in-depth and gives a good overview of the topic.  To know more you can refer to my blog