In our last several articles we’ve taken a tour of the four major strategies for creating a successful AI-first company.  So which one is best?

Since we’re going to offer a side-by-side comparison you may want to refer first to the foundation articles on the four strategies:

Horizontal versus Vertical, and

Here’s How They Stack Up 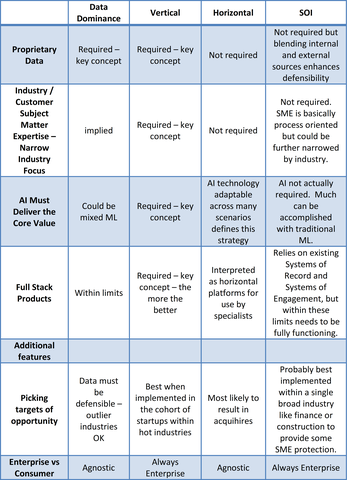 There is wide agreement that controlling a unique data set is the most effective way to create a defensible moat.  The exception is the Horizontal strategy which investors regard as fully exploited, that is the leaders have created dominant positions and are unlikely to be unseated.  Since the IP in ML/AI cannot reasonably be protected, control and dominance of the data is the remaining strong play.

Systems of Intelligence companies are less defensible on this dimension.  Since they don’t own the System of Record or the Systems of Engagement, they must rely on network effect of many users and a superior UI to attract and retain customers.  It also suggests that existing SOR or SOE dominant vendors may move in as direct competitors either by acquisition or as soon as the market is shown to be viable.

Finding any sort of external data that can be claimed as proprietary and blended with the SOR data and manipulated with the ML/AI layer would seem to be the only protection.

This element leads back to finding a true hair-on-fire problem to be solved.  Today these are all industry specific.  This may in fact be the most difficult part for founders to identify.  Bringing in industry respected leaders and SMEs early to the team not only brings focus and strength to the solution but will also create trust when it’s time to go to market.

In the Systems of Intelligence strategy the focus is on processes across industries so the SME component will focus on the process desired.  It’s likely that SOI-based companies will also want to narrow their industry focus to just a few similar industries to make implementation configuration less complex blending with the Vertical strategy.

AI Must Deliver the Core Value

In the Vertical strategy, the lead advocate Bradford Cross, himself a VC is trying to build an investment thesis for selecting among AI-first startups.  His position is that only AI can or must deliver really break through differentiation in the solution offered.

However, when we look at the example companies from the Data Dominance strategy (Blue River, Axon, and Stitch Fix), as well as those implementing the Systems of Intelligence strategy, it looks like a great deal can be accomplished with a mix of traditional ML and some AI.

Our take is that founders should try to envision AI-first strategies where they can offer true break through solutions, but not throw out the contribution of traditional and much easier ML.

There is even an argument that in developing a Minimum Viable Data Product that it’s easier to create earlier generations of the product with ML until the users help you focus in on what’s important.  Speed is more important than complexity or even full functionality early in the MVP process.

The Data Dominance and Vertical strategies both suggest that a full stack solution is desirable or even a requirement.  If there’s an issue here it’s in how to interpret full stack.

Bradford Cross of the Vertical strategy makes a major issue of this taking the position that the complete solution and complexity of a true full stack solution creates its own additional moat.

Our observation is that while fully solving the customer’s problem is important, it’s possible to get carried away with what full stack means.  See our example of the full stack predictive maintenance solution in the Vertical/Horizontal review as an object lesson in not getting carried away.  The full stack suggested there by BCG would require building an app equivalent to an SAP or PeopleSoft ERP.  That might be a good goal, but you can probably wow your customer with something more limited and achievable.

So Which is Best?

If we were awarding points we’d have to say that the Data Dominance and Vertical strategies are in the lead.  The best evidence of this is where VCs are putting their investments and that clearly is in these two similar but slightly different buckets.  The question is still open as to whether any of these AI-first companies can grow to IPO scale.

Of the example companies we held out, Axon was already public before introducing an AI product.  This is more of the data-side-car strategy from the old Horizontal days, but their treatment of AI with the Data Dominance strategy may be their ticket to growth.

Blue River Technology was recently acquired by John Deere.  This was no acquihire and the tail may wag the dog.  It may be that Blue River will show the traditional equipment manufacturer how to survive and thrive into the future.

That leaves Stitch Fix which is still growing nicely.  Too early to say if they’ll make it to IPO.  Or will Amazon scoop them up?  Their positioning using data dominance remains unique and very different from Amazon’s usual way of selling fashion.

About the author:  Bill Vorhies is President & Chief Data Scientist at Data-Magnum and has practiced as a data scientist since 2001.  Bill is also Editorial Director for Data Science Central.  He can be reached at: