I’ll provide an overview along with information to help you choose. I organize the types of regression by the different kinds of dependent variable. If you’re not sure which procedure to use, determine which type of dependent variable you have, and then focus on that section in this post. This process should help narrow the choices! I’ll cover regression models that are appropriate for dependent variables that measure continuous, categorical, and count data.

Regression analysis with a continuous dependent variable is probably the first type that comes to mind. While this is the primary case, you still need to decide which one to use.

Continuous variables are a measurement on a continuous scale, such as weight, time, and length. 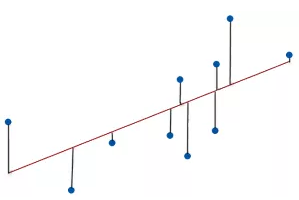 OLS produces the fitted line that minimizes the sum of the squared differences between the data points and the line.

Linear regression, also known as ordinary least squares (OLS) and linear least squares, is the real workhorse of the regression world. Use linear regression to understand the mean change in a dependent variable given a one-unit change in each independent variable. You can also use polynomials to model curvature and include interaction effects. Despite the term “linear model,” this type can model curvature.

This analysis estimates parameters by minimizing the sum of the squared errors (SSE). Linear models are the most common and most straightforward to use. If you have a continuous dependent variable, linear regression is probably the first type you should consider.

There are some special options available for linear regression. 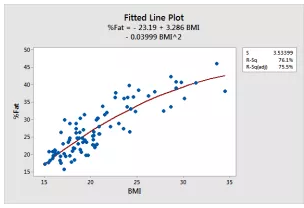 Linear models are the oldest type of regression. It was designed so that statisticians can do the calculations by hand. However, OLS has several weaknesses, including a sensitivity to both outliers and multicollinearity, and it is prone to overfitting. To address these problems, statisticians have developed several advanced variants:

Like OLS, nonlinear regression estimates the parameters by minimizing the SSE. However, nonlinear models use an iterative algorithm rather than the linear approach of solving them directly with matrix equations. What this means for you is that you need to worry about which algorithm to use, specifying good starting values, and the possibility of either not converging on a solution or converging on a local minimum rather than a global minimum SSE. And, that’s in addition to specifying the correct functional form! My advice is to fit a model using linear regression first and then determine whether the linear model provides an adequate fit by checking the residual plots. If you can’t obtain a good fit using linear regression, then try a nonlinear model because it can fit a wider variety of curves. I always recommend that you try OLS first because it is easier to perform and interpret.

So far, we’ve looked at models that require a continuous dependent variable. Next, let’s move on to categorical independent variables. A categorical variable has values that you can put into a countable number of distinct groups based on a characteristic. Logistic regression transforms the dependent variable and then uses Maximum Likelihood Estimation, rather than least squares, to estimate the parameters.

Read my post about a binary logistic model that estimates the probability of House Republicans belonging to the Fre....

Ordinal logistic regression models the relationship between a set of predictors and an ordinal response variable. An ordinal response has at least three groups which have a natural order, such as hot, medium, and cold.

Example: Market analysts want to determine which variables influence the decision to buy large, medium, or small popcorn at the movie theater.

Nominal logistic regression models the relationship between a set of independent variables and a nominal dependent variable. A nominal variable has at least three groups which do not have a natural order, such as scratch, dent, and tear.

Example: A quality analyst studies the variables that affect the odds of the type of product defects: scratches, dents, and tears.

If your dependent variable is a count of items, events, results, or activities, you might need to use a different type of regression model. Counts are nonnegative integers (0, 1, 2, etc.). Count data with higher means tend to be normally distributed and you can often use OLS. However, count data with smaller means can be skewed, and linear regression might have a hard time fitting these data. For these cases, there are several types of models you can use.

Count data frequently follow the Poisson distribution, which makes Poisson Regression a good possibility. Poisson variables are a count of something over a constant amount of time, area, or another consistent length of observation. With a Poisson variable, you can calculate and assess a rate of occurrence. A classic example of a Poisson dataset is provided by Ladislaus Bortkiewicz, a Russian economist, who analyzed annual deaths caused by horse kicks in the Prussian Army from 1875-1984.

Use Poisson regression to model how changes in the independent variables are associated with changes in the counts. Poisson models are similar to logistic models because they use Maximum Likelihood Estimation and transform the dependent variable using the natural log. Poisson models can be suitable for rate data, where the rate is a count of events divided by a measure of that unit’s exposure (a consistent unit of observation). For example, homicides per month.

Example: An analyst uses Poisson regression to model the number of calls that a call center receives daily.

Not all count data follow the Poisson distribution because this distribution has some stringent restrictions. Fortunately, there are alternative analyses you can perform when you have count data.

Zero-inflated models: Your count data might have too many zeros to follow the Poisson distribution. In other words, there are more zeros than the Poisson regression predicts. Zero-inflated models assume that two separate processes work together to produce the excessive zeros. One process determines whether there are zero events or more than zero events. The other is the Poisson process that determines how many events occur, some of which some can be zero. An example makes this clearer!

Suppose park rangers count the number of fish caught by each park visitor as they exit the park. A zero-inflated model might be appropriate for this scenario because there are two processes for catching zero fish:

Whew! That’s many different types of regression analysis! If you’re trying to figure out which one to choose, I hope you will use this information to point yourself in the right direction!

If you’re learning regression, check out my Regression Tutorial!