A fictitious retailer which I am calling Malwart sells automobiles and automotive parts.  On this blog I will be focused on the sale of a particular automobile model called the Blair - a sporty compact that can be ordered in custom colour schemes.  Because all sales must be done by clients that also have accounts, sales data is normally associated with some basic demographic data.  Orders can only be placed online where the service interface supports the process of mixing and matching.  Typically a client takes a week to several months to complete building their “dream car.”  During this time, the chance of a client contacting an agent is about 100 percent - actually, about 3.5 times.

The company’s analyst notices something peculiar:  1) most of the clients are women in their 30s and 40s; moreover, 2) agents seem to demonstrate different levels of success selling to male and female clients at different age brackets.  Questions arise as to whether it might be worthwhile for the techniques of the most successful agents to be promoted among all available agents; or maybe agents with success among clients of a particular gender and age bracket should be assigned for follow-up and future support.

The analyst says, “Assuming the information we provide to clients is the same regardless of agent, perhaps clients find certain agents more convincing based on their character types.”  Just to keep the blog brief, I am going to ignore the issue of age brackets and focus the apparent differences in sales depending on gender.  (This is not to say that age brackets should be ignored - since to me the age seems relevant in relation to many products.)  The analyst decides to determine which agents seem most and least successful with men and women.  The bar charts below show that Scott, Michael, Cynthia, and Janice have the least success selling to women.  However, they are most successful selling to men. 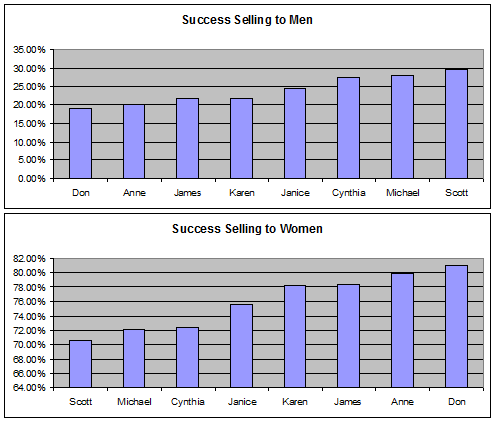 Taking the market as a whole, there is a gender predisposition:  76.15 percent of sales go to women, 23.85 percent to men.  The analyst decides to create a series of character attributes - only one of which will be discussed here - the level of aggressiveness.  This is aggressiveness in terms of conversational demeanor.  The classification process is brought about using a behavioural instrument that the analyst designs to capture certain aspects of personality among front-line workers.

The assertion that conversational demeanor might be worth studying in relation to sales actually represents a significant inferential leap; and reaching such an assertion might be a major undertaking all on its own.  (The dynamics are not necessarily as clear as the bar charts from my engineered data.)  In other blogs, I mention this process as following the “odour of data.”  I have recently attached a formal name to the algorithm - the “Infereferencing Algorithm” - or maybe the “Half Crosswave Differential Algorithm” - which I expect to cover in greater detail in the future.  Below is an application that determines narrative events through infereferencing (pronounced infer + referencing). 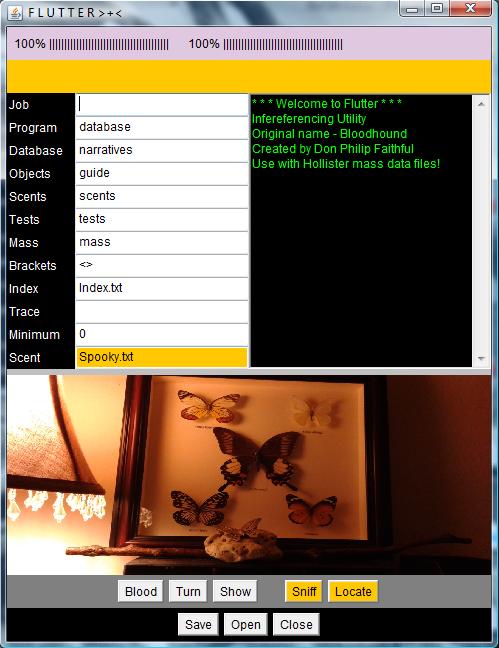 Karen, James, Anne, and Don (group “Amicable”) are highly “person oriented”; they converse almost as if the sale is secondary or incidental.  They might be described as “low-pressure” sales agents.  Scott, Michael, Cynthia, and Janice (group “Aggressive”) are more “process or results oriented.”  The members of this latter group seem better able to convince male clients.  This leads the analyst to surmise that perhaps men prefer to have more direction - or to be directed - because the product offers so many different choices.  The distribution of male and female clients for each agent is shown below along with the X^2 value obtained from the two groups.

Sales are important regardless of the gender of the potential client.  The analyst is therefore careful not to suggest that the company direct its resources towards only a particular segment of the market.  But by examining the character characteristics of the agents, the company can gradually develop a base of knowledge pointing to how particular “character portrayals” can improve sales.  The technique can be used to enhance sales connected to gender and - if the data is available - age brackets.

The math is not necessarily complicated.  The real challenge involves identifying and articulating how age, gender, and other self-identity issues interact with personalities and character portrayals (a.k.a. “acting” or “posing”).  It is a real business concern.  Within this analytical paradigm, it is preferable to maintain a database of character attributes for each agent - over a period of time - for each interaction.  This is because an agent can portray him- or herself differently in an effort to obtain a sale.  It is also important to note, the market itself changes over time - that is to say, the gender predisposition likely has a “natural” shift.  Changes might be due to advertising, pricing strategies, the products available, morphing social conditions, and market learning.

My basic message in this blog is that “selling skills” should not be regarded as something inherent in a person (circle to the left): e.g. “Cynthia sells a lot.”  But rather we should consider the ability to sell as portable (circles to the right): “Cynthia has attributes to help her sell a lot.”  Moreover, we should whenever possible take into account the context of the sale:  “Proportionately speaking, Cynthia demonstrates an ability to sell to male clients; but there is room for improvement in terms of female clients.”  The data system has to be sufficiently sophisticated to make such determinations.

The ability of an agent to dynamically adjust - this is something that needs to be a consideration to prevent the agent from inadvertently becoming a “specialist” - for example, a person comfortable selling to men but destined to remain lousy selling to women.  A barrier might emerge preventing the company from retaining and expanding its “markets.”  Market warfare is fought using data, which is collected not only to monitor trends and patterns but also to help agents determine how best to portray themselves.  Put a bit differently, a study of sales is really a study of narratives - how characters or characterizations reach their destinations depending on the paths chosen.  However in business, the analysis is or should be a highly coherent and methodical process.

I used fictitious data in this blog since I cannot share real data.  There are many implications when analyzing characters - such as the possibility of adjusting recruitment and selection to be more character-oriented.  In a number of my other blogs, I discuss my “Animal Spirit Model,” which I point out does not have necessarily have to used on an agent or sales person.  A character spirit is something that a retail outlet or website can possess.  Similarly, the issue of characterization goes beyond human embodiment.  Is a webpage or isle in a department store more likely to attract male or female clients - of which age group?  Why?  Imagine the depth of analysis necessary just to engage the question of gender predisposition and monitor its changing shape over time.