This is my favorite IoT story which I first heard from Joseph Sirosh, CVP of Machine Learning for Microsoft at the spring Strata convention in San Jose.  We are so used to IoT platforms being physical objects like cars or thermostats or gaming consoles that we forget about the potential for biologics.  Of course FitBit will immediately come to mind for human beings but in terms of direct economic reward little will compare to this story about the IoT and cows.

The setting is Japan but it could just as easily have been Iowa.  The players are Fujitsu who developed this system and Microsoft Azure providing the NoSQL DB on which it runs.

The opportunity requires seeing a dairy farm as a simple manufacturing environment with cows and feed coming in one end and milk products coming out the other.  The immediate problem for the farmer is replacing or adding to his production capacity, the cows.

Dairy cattle are largely ‘produced’ by artificial insemination and we’ve been doing that long enough that we can get a 70% conception rate, but only if the procedure occurs when the cow is in estrus.  That proves much harder to predict since it mostly relies on the farmer’s experience-based intuition which turns out isn’t all that good.  In fact, farmers only get it right statistically about 55% of the time meaning that the true pregnancy rate is only 39%.

So Fujitsu reasoned if estrus detection could be made perhaps 95% accurate the pregnancy rate would go up to 67% or a whopping 70% improvement in performance.  But estrus detection isn’t all that easy since Bessie is only in estrus about once every 21 days; estrus lasts only 12 to 18 hours, and just to make it that much more difficult, usually occurs between 10 pm and 8 am, just when the poor exhausted farmer is asleep.

So first let’s talk about how this all turned out.  In the chart below the green line represents the number of steps normally taken by a cow and the yellow line represents the steps taken by a cow in estrus.  It turns out that the onset of estrus can be detected because Bessie starts doing a little dance.  The optimum time for artificial insemination is 16 hours later.  And as a very valuable added bonus it turns out that AI performed in the first two hours of the window has a much higher probability of producing a female which of course is what you want for a milk cow. Fujitsu equipped the herd with battery powered pedometers to detect the number of steps, wirelessly transmits that information to a MS Azure DB where it’s analyzed, and notifies the farmer via mobile phone app when the time is right.  Pretty remarkable. In field testing, over a group of 11 dairy farms, the farmers achieved annual increases in herd size, when compared with historical methods that averaged 12% and ranged upwards to 31%.

If you’re a farmer that’s all you really need to know.  But if you’re a data scientist it’s the part of the story that isn’t told above where the magic happens. 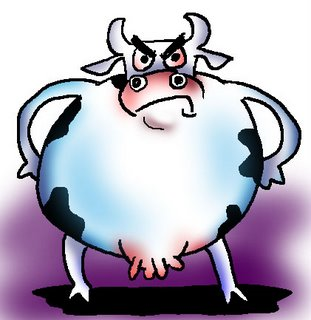 When conceiving this idea that estrus can be detected by some combination of measurable biologic factors that the cow will demonstrate, as data scientist we can only imagine the amount of poking and prodding the test cows must have endured as Fujitsu built up its data base.  I imagine there must have been multiple body temperature, blood chemistry, waste and urine chemistry, and who knows what else that was originally fed into the hopper to build the model.  Remember that IoT is a classic two step data science process.  Gather and analyze data and use classical predictive modeling techniques to find a signal in the data that predicts the desired outcome, estrus.  I imagine the data scientist at Fujitsu must have been overjoyed to find something as simple as the number of steps since it could have been much messier.

The data which is found to be predictive, the steps, is then gathered in the production environment via the pedometers and scored via the predictive models to signal the farmer that Bessie is ready to get busy.

As a bonus, Fujitsu claims that it can also detect as many as ten different diseases using the same technique.  If you’d like to see Joseph Sirosh tell the story it’s available on YouTube at https://www.youtube.com/watch?v=oY0mxwySaSo.

About the author:  Bill Vorhies is Editorial Director at DataScienceCentral.com and has practiced as a data scientist and commercial predictive modeler since 2001.

Where did they think the phrase "hot to trot" came from?  Sorry I couldn't resist - great article, thanks Bill, :-)

Thank You very much.