The “three wise men” in the story of the nativity are believed to be Magi or Zoroastrians.  As the story goes, these three wise men followed the Star of Bethlehem in search for the messiah.  For the most part, the Zoroastrians supported the one-god concept - and they also believed in a messiah.  It made sense for them - sometimes regarded as the original astrologers - to use their special talents to seek out the baby Jesus.  It makes sense purely from a narrative standpoint; although to me it seems quite difficult to find somebody using a star or comet as a guide.  I have trouble locating my pick-up truck in a Walmart parking lot using the lettering outside the building: e.g. “In front of the Pharmacy.”  Thousands of years later - in the Age of Aquarius - almost anyone can download celestial apps for their smartphone.  I did this because I wanted to know how the planets were positioned during a violent homicide incident that I likewise downloaded from the internet.  The incident is explained in court documentation for one of the accused attempting to reduce his prison sentence.

An astrological layout will likely have the earth as its centre as in the picture below (from online on theplanetstoday.com).  Hopefully as everyone knows, the earth isn’t literally at the centre; but this does not invalidate the “perspective from earth” looking outward.  The apps that I downloaded for my smartphone are more astronomically oriented:  the sun is at the centre.  I noticed a little problem when I turned back the time on the apps to the homicide.  The constellations are off by exactly one zodiac sign depending on whether I use an astrological or astronomic resource.  A bit disturbed by this peculiarity, I read up on the zodiac.  I discovered that astrologers are likely to be a zodiac sign ahead because they divide the constellations a bit differently.  I decided to go for consistency and stick to what my smartphone says.  I will after all be using all sorts of astronomical data that the Magi couldn’t easily access - in particular, the distance of the planets from earth. 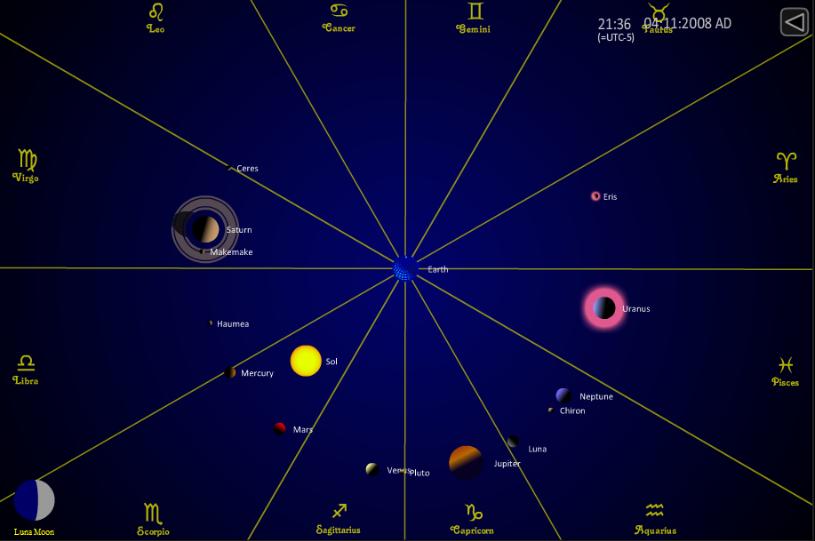 I am putting my own spin on astrology by distinguishing between people on the earth - e.g. the killers involved in the homicide case - and the earth itself.  This means among other things that it is somewhat common for people to be in-between the gravitational influences of the earth and moon.  As the chart above shows, although the distances are completely inaccurate, around the date of the murder, Saturn and Uranus were almost completely in opposition.  This fact is true irrespective of astrological or astronomic app.  Interestingly, the major planets and even some of the dwarf planets were “all on one side” of the earth - which is evident from an earth-centric astrological standpoint.

At question is the extent to which planets and other celestial objects affect human behaviour.  I think this is a perfect time to collect data - along with all of the other data that might be collected in relation to a homicide case.  Unlike traditional astrology, I intend to largely ignore “the sign” under which a person is born - or in any event the astrological significance of the birth-date.  I will however make use of a number of different models including personality profiles.  I would describe myself as “extremely interested” in real-life circumstances.  I am adding real-life homicide cases to my narrative database so the data can be systematically analyzed.  The role of the astrological data - in this case not all that different from astronomic data - is to add to the case events.

The first case involves a young man found guilty of second-degree murder.  Based on the court documentation, I believe this means that he didn’t “plan” the murder.  Others were found guilty of first-degree.  It is an extremely violent case.  There is nothing to be solved.  This is more of a study.  In order to determine the extent to which certain character profiles might be associated with particular celestial phenomena, the data object for the profile is used to compile relevant storylines.  These storylines are then analyzed to calculate the prevalence of celestial events, providing a distribution.  It isn’t necessary to use personality profiles or homicides specifically.  I could for instance, if I were inclined to do so, make use of economic storylines containing stock-market data.  The rationale behind the methodology starts to erode using economics since market behaviour might not reflect the unique individual sensitivities and vulnerabilities of individual participants.

The use of celestial phenomena to “foretell” the future is as problematic as the use of metrics more broadly:  the celestial events or metrics might not actually be connected to the subject of one’s interest.  This disconnection seems more likely in relation to celestial events being far away from humans.  I am actually more interested in “coincidental timing.”  Celestial movements are so accurate, planetary positions can be determined thousands of years in the past and future.  We are surrounded by a massive clock much more intricate and elaborate than anything on earth.  The prediction of human events does not necessarily have to be conflated with the timing.  But if one “were” concerned about prediction, it is important to establish a timing mechanic of adequate sophistication to make an analysis possible.

The other important aspect of celestial influence apart from timing is the logical partition of events.  Events tend to be partitioned in laboratory tests using simple and often equal time periods: e.g. the progression of a severe medical condition every minute - or less in the case of a heart attack.  That kind of convenient timing is less plausible in relation to social changes and transformations to civilizations.  Changes to a civilization can be measured by its growing seasons, melting ice caps, the rise and fall of empires.  In effect, “change” can become “apparent” if it is connected to events; made invisible if it connected to simple time.  For example, a “super-volcano” or “the big one” might be unpredictable in terms of regular timing; but assuming the earth adheres to some kind of regulating mechanism, it only makes sense to include planetary positions in the analysis.  And if people start exhibiting increased aggression prior to cataclysmic events - such as events preceding the extinction of species - it might be worthwhile to interpret such phenomena in relation to different logical boundaries.  Anyways, this is part of my rationale.  I already mentioned that it is quite easy to add astronomical details to the database.  The additional effort is minimal while the potential increase in utility is great.

It is easy to include astrological details these days.  The interesting part of the process occurs when we start adapting our methodologies to deal with the question of how: e.g. in relation to planetary alignments, oppositions, distance, illumination.  The "butterfly effect" is premised on the idea that the flutter of a butterfly in just the right conditions can cause hurricanes.  So the focus, in terms of physical or material changes, isn't on whether planets per se bring about specific phenomena on earth but the extent to which systems interact and collide to make the improbable much less so.  In terms of psychological influences on susceptible individuals, here again it's important not to regard planets as primary sources of invocation but as parts of a complex interactive ecology that might to some extent be heralded by the presence and placement of planets.  So I personally won't be examining health care demands or financial changes in relation to astrological developments - and I think it's great if others interested in potential connections go ahead and take ownership.  I'm strictly going to look at documented homicide and astrological details, focused specifically on aspects of the main characters - e.g. serial killers, their accomplices, and victims.

Who cares about the period spacing?  Lots of us were brought up to use two spaces as the "right" thing to do.  Anyway, very interesting article.  I've been wanting to bounce some astrological data against financial data sets to see if there's anything to some of these more esoteric astrology-based trading methodologies (and my guess is "most likely not", but it would be a very interesting exercise in any case.)

+2 for an interesting read. -1 for using two spaces after a period :) A more specific and fine-tuned study could be the number of hospital visits / percent increase in visits during a full moon.