AI as a Catalyst Across Most Cycles of the IoT

This article was written by Roger Strukhoff and Sophie Turol. 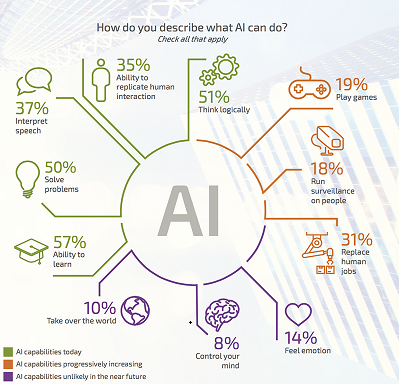 The Internet of Things (IoT) is covering the gamut of industries: healthcare, aviation, automative industry, predictive maintenance, and many more.

Most enterprises seem to be able to think of something uniquely valuable to them, as it looks like the IoT will soon be adopted by a majority of companies. Gartner reported in 2016, for example, that 43% of organizations surveyed would have an IoT deployment by the end of the year, with another 21% planning to deploy IoT this year and beyond. The numbers rise to 60% and 87%, respectively, in the healthcare business, according to another source.

Projections say IoT will represent several hundreds of billions of dollars per year soon. However, such projections vary, as Ahmed referenced to the Gartner forecast of 20.8 billion connected things in use by 2020, while other forecasts put it as 50 billion and beyond.

“The sheer volume of data being collected as IoT starts to penetrate almost all aspects of our lives.” —Ahmed Banafa

Indeed, data volumes are growing at a scary rate. The Internet handled more than a zettabyte (one million petabytes) of data this year, and is growing at a rate exceeding 20% per year.

Why coupling IoT and AI?

Overall statistics aside, individual enterprises have their own stories about data growth, and how they intend to handle it. Surely, this is what cloud computing in all its forms is all about. But simply processing it, transmitting it, and storing it is not enough. Data is not simply water or electricity. It’s a core asset of any company.

Well, the third wave of artificial intelligence (AI) upon us. A survey by Pega investigated what organizations do think about AI. The capabilities that seem attractive include speech recognition, replication of human interaction, problem solving, etc. The capabilities to actively developing within AI mentioned were game playing, running surveillance, automating manufacturing, etc.

What’s the urgency? We’ve been hearing about the IoT for several years now, with focuses on making sense (if possible) of the protocols involved, the security of data, and how to handle it in its many varieties, velocities, and volumes. Why should we now pay such close attention to AI?

Ahmed’s point is that enterprises will be, figuratively speaking, just wading in a bunch of water, if they don’t apply AI technologies to their newly created IoT deployments. Separately, I learned that not only data, but the networks themselves, should be imbued with AI.

“Integrating AI into the IoT networks is becoming a prerequisite for success in today’s IoT-based digital ecosystems. Businesses must move rapidly to identify how they’ll drive value from combining AI and IoT—or face playing catch-up in years to come. They need to combine IoT with rapidly-advancing AI technologies to simulate intelligent behavior and make well-informed decisions with little or no human intervention.” —Ahmed Banafa

The areas AI can be applied to: