An Argument in Favor of Centaur AI

Summary:  Centaur AI is the best marriage of the machine’s ability to remember, analyze, and detect issues along with the human’s intuition to evaluate or take action on those results.  Instead of focusing on AI replacing humans, we should focus on AI in its role of augmenting humans. 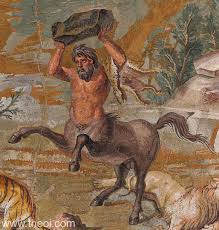 In this angsty age where so much attention is given to AI replacing humans it’s worth reviewing the very real divide between AI applications that replace humans versus those that augment them.

The phrase ‘Centaur AI’ derives from the early chess tournaments that Gary Kasparov fought with Big Blue seeking to hold off the day when computers would in fact surpass human chess players.  The name comes from the Greek legend of half-man half-horse invoking the special powers of each when combined.

The human plus computer style of chess is known as Freestyle allows the players to consult with outside resources, be they human, books, or in this case computers.  The best Freestyle players frequently beat grand masters and computers showing that the combination of human intuition and AI pattern discovery is superior to either taken alone.

It seems these days we are focused too much on AI applications that replace.  Both AI developers and AI consumers seek out the best autonomous text and speech chatbots, the best image classifiers, the best computer vision apps, and even the best recommenders with the intent of turning these loose on tasks previously done by humans.

It’s true that in many if not all of these circumstances that the AI performance is equal to human performance, so why not turn the tireless robots loose where fallible humans used to tread.  If our industrial robots failed to place the part exactly where it’s supposed to be, or if our self-driving car required our continuous attention (as they currently do) we would be less than satisfied as AI consumers.

The argument we would like to make here however is that both developers and consumers of AI apps should increasingly look for opportunities where AI works in tandem with human knowledge and intuition to produce a better outcome.

Here are some examples of where that’s already working and others where more team work between man and machine would probably be beneficial.

One example of this partnership is found in the process by which raw images and text are labeled in order to be used in training data.  There are any number of companies set up to do this working with both image and text data to create annotations useful in training.  Figure Eight is one of the early innovators in the field and now has ‘human-in-the-loop’ techniques as a regular feature.

In a sample scenario, an image or text might be labeled by an AI application two or three times to see if the annotations are consistent, then checked by a human where they disagree.  If the human corrects a machine labeling error that error data can be fed back into the labeling AI to improve the model.

Still, the concept of humans correcting potential errors in AI is not entirely what we mean by the Centaur partnership.

One of the very earliest applications of ML was in financial services and insurance to assist CSRs with cross sell and up sell.  After addressing the customer’s reason for calling an ML model would assess both the contents of the call and the customer’s current products and usage to make an upsell or cross sell recommendation.

This would typically be fed to the CSR as a single finished script to be included in the conversation.  But despite the relatively low pay and high turnover rate of these telephone representatives, they may still be better equipped than a pure ML model to pick the next best offer.

Here’s an opportunity for implementers of AI to suggest two or three alternative recommendations and let the CSR use their intuition and direct experience with each customer to pick which offer to present.

An extension to the recommenders is the use of human intuition to better select an appropriate solution to a customer problem.  Particularly in technical or semi-technical environments like software or hardware problems that can have multiple overlapping symptoms and even overlapping solutions allowing AI to look for patterns of symptoms and solutions in CSR records can be used to create a Watson-like repository that can be queried by the CSR.

IBM’s Watson (a Question Answering Machine), which was designed to deliver the single best answer to a query was actually never commercially successful.  Allowing a knowledgeable technical service representative access to the top several recommendations from such an AI-enabled database, combined with their own knowledge and intuition would almost surely yield a better result and allow less experienced TSRs to solve more complex customer problems.

There are a whole host of current applications in which the AI is intended to detect a problem or condition and refer the finding to a human for action.  Particularly with computer vision applications the AI flags the condition which might be a traffic jam, a pot hole, an area of a crop that needs water or fertilizer, or an enemy combatant.  In essentially all of these cases we use the AI to detect but leave it to a human to decide the action making the human orders of magnitude more efficient in their part of the task.

While we’ve focused here on deep learning applications, the same would be true of for example ML models used for predictive and preventive maintenance.  The ML model would flag a potential problem.  The human would verify its accuracy and decide which of several types of action would be best to solve the problem.  Warehousing, distribution, and logistics would be other areas that would particularly benefit from this type of solution.

Where is Centaur AI Most Likely to be Applicable?

The most likely scenarios for Centaur AI are those which have solutions that are in some dimension ‘gray’.

The more complicated the scenario and the greater the degree of human interaction, the greater are the odds that a Centaur partnership between man and AI will yield the best results.