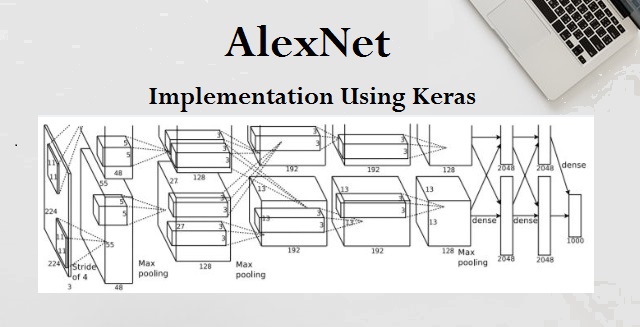 Alex Krizhevsky, Geoffrey Hinton and Ilya Sutskever created a neural network architecture called ‘AlexNet’ and won Image Classification Challenge (ILSVRC) in 2012. They trained their network on 1.2 million high-resolution images into 1000 different classes with 60 million parameters and 650,000 neurons. The training was done on two GPUs with split layer concept because GPUs were a little bit slow at that time.

The AlexNet architecture consists of five convolutional layers, some of which are followed by maximum pooling layers and then three fully-connected layers and finally a 1000-way softmax classifier.

In the original paper, all the layers are divided into two to train them on separate GPUs. Since it is a complex arrangement and difficult to understand, we will implement AlexNet model in one layer concept.

The input for AlexNet is a 227x227x3 RGB image which passes through the first convolutional layer with 96 feature maps or filters having size 11×11 and a stride of 4. The image dimensions changes to 55x55x96.

Then the AlexNet applies maximum pooling layer or sub-sampling layer with a filter size 3×3 and a stride of two. The resulting image dimensions will be reduced to 27x27x96.

Next, there is a second convolutional layer with 256 feature maps having size 5×5 and a stride of 1.

Then there is again a maximum pooling layer with filter size 3×3 and a stride of 2. This layer is same as the second layer except it has 256 feature maps so the output will be reduced to 13x13x256.

The third, fourth and fifth layers are convolutional layers with filter size 3×3 and a stride of one. The first two used 384 feature maps where the third used 256 filters.

The three convolutional layers are followed by a maximum pooling layer with filter size 3×3, a stride of 2 and have 256 feature maps.

Sixth Layer:
The convolutional layer output is flattened through a fully connected layer with 9216 feature maps each of size 1×1.

Seventh and Eighth Layers:
Next is again two fully connected layers with 4096 units.

Output Layer:
Finally, there is a softmax output layer ŷ with 1000 possible values.