Annalee Newitz is the Tech Culture Editor at Ars Technica. Her work focuses on cultural impact of science and technology. She founded the science and science fiction blog io9.com, and is the author of Scatter, Adapt, and Remember: How Humans Will Survive a Mass Extinction. Her first novel, Autonomous, comes out in September 2017. She has a Ph.D. in English and American Studies from UC Berkeley, and was the recipient of a Knight Science Journalism Fellowship at MIT. She lives in San Francisco with many other life forms, some of which have yet to be identified.

You can read the original post and the movie here

Last year, director Oscar Sharp and AI researcher Ross Goodwin released the stunningly weird short film Sunspring. It was a sci-fi tale written entirely by an algorithm that eventually named itself Benjamin. Now the two humans have teamed up with Benjamin again to create a follow-up movie, It's No Game, about what happens when AI gets mixed up in an impending Hollywood writers' strike. Ars is excited to debut the movie here, so go ahead and watch. We also talked to the film cast and creators about what it's like to work with an AI.

The scenario in It's No Game is sort of like Robocop, with about 20 hits of acid layered on top. Two screenwriters (Tim Guinee and Walking Dead's Thomas Payne) are meeting with a producer (Flesh and Bone's Sarah Hay), who informs them that it doesn't matter if they go on strike because the future is AI writing movies for other AI. As evidence, she shows them Sunspring, gushing about how it "got a million hits." The fact that Sunspring did in fact get a million hits in real life, and that there really is a writer's strike threatening Hollywood, make this movie even more of a reality distortion field.

Things go completely off the rails when the producer brings in "the Hoffbot" (David Hasselhoff, in a tour-de-force performance that's surprisingly moving). The actor has been reprogrammed by nanobots to channel the AI writer Benjamin, and that's just what it sounds like when the Hoffbot springs to life. Checking his K.I.T.T. watch in full Knight Rider style, the Hoffbot spouts odd shreds of dialogue torn from his 80s hits Baywatch and Knight Rider. Not content to torment only Hasselhoff, the nanobots proceed to take over everyone else in the room, forcing them to act out lines cobbled together by more algorithms trained on Shakespeare, Aaron Sorkin films, Golden Age Hollywood scripts, and other surprises. Finally Hay injects herself with nanobots and dances a menacing, disjointed, and beautiful piece of choreography based on French words for ballet moves strung together by yet another algorithm.

Before we move on, let's try to separate truth from science fiction for a moment. There are no nanobots that can take over your body, but there is actually an AI who wrote all those lines (and dance moves). AI is not going to replace writers during the strike, but it might help humans write screenplays more and more often. Hoffbot is a bot, but he really is played by Hasselhoff. Hay really was a ballerina before she acted in a fictional TV series called Flesh and Bone about ballerinas. Also, the shorts that Hasselhoff is wearing in the final, brutal scene? Yep, those are actually shorts he wore on Baywatch.

How to be an AI-powered actor

When I spoke to some of the actors involved with It's No Game, they all seemed unfazed by having to inject emotion into lines that bordered on nonsensical. Partly that was because Sharp and Goodwin played a lot with genre in this short, creating AIs who spouted dialogue that came from recognizable sources. Payne, who played one of the writers, said he enjoyed the challenge of moving from one style to another. At one point he and Guinee jump from a Golden Age romantic kiss right into a tense dialogue from an algorithm that Goodwin dubbed the Sorkinator. "To a certain extent you have to play a bit of mood, so you’re putting across the style of the dialogue," Payne said. "As long as you say it with conviction it will work."

For audiences, the results might not be that different from trying to follow a complicated movie, Payne mused. "People will watch a Sorkin movie and not take in what’s being said, [but] understand the thrust of the scene and know what’s going on."

For Hay, the key to getting into her role was thinking about why her character might want to become a ballerina bot. Unlike the other characters, the producer isn't forced to become an AI puppet. She chooses it. Director Sharp talked to Hay about the idea that most people secretly want to give up control and how the nanobots represent that fantasy. "Wouldn't it be easier if our computers and phones could take over and control us?" Hay asked rhetorically. "Those things freak me out in reality, but I think for her this is joyous. I’m free. When she stabs herself with this [nanobot-activating] pen, it’s like an orgasm for her. Finally I have everything I need right now because I don’t have to make any choices."

After Hay's orgasmic AI takeover, however, we return to the fate of the Hoffbot. Now shivering on the floor, he wears an incongruous outfit of smoking jacket and Baywatch shorts, and stares into the camera with tearful intensity. "I don't know who the hell I am. I wanna be a man," he sobs. "I wanna go to the movies!" The absurdist lines were written by AI, but Hasselhoff said they feel like they came straight from his heart. "This AI really had a handle on what's going on in my life and it was strangely emotional," he explained. Hasselhoff continued:

There was this one line: "I don’t want to see you anymore." I thought, "That’s a great line. I don’t want to see you, I don't want to date you, I wanna talk to you." It’s like I’ve had this conversation with my ex-wife so many times. I want to talk to you and for you to see me and understand me...When you’re acting out these strange lines they become part of your soul and you can actually give meaning to [them].

To act that final scene, Hasselhoff imagined that he had taken over his own body again, fighting off the nanobots to say something that wasn't just a Hoffbot construction. "When he was taken over he had no choice but to say those lines, even when they were wrong. I would never have said those lines," he said. But then, "he wanted to humanize himself. He just wanted to be a man. He wanted to go to the movies. That's my favorite line. I just wanna go to the movies."

Acting the Hoffbot part, though, was just like old times. Hasselhoff talked a lot to Sharp about the divide between himself as an actor and "the Hoff," a caricature whom he described as "created by secretaries 14 years ago in Australia. It’s not who I am." His emotional outburst in that final scene dramatizes the sometimes painful divide between self and commercial creation.

For Sharp, who grew up hooked on Knight Rider, watching Hasselhoff transform into the Hoffbot was sort of like a fan's dream come true. At the same time, it was a fascinating look at how acting works. "Watching David perform those lines, there was this moment where his whole stature changed. His shoulders went back and he took an 80s power stance. The watch goes up to his mouth and it was like muscle memory. An actor’s imagination exists in their body, and his muscle memory kicked in." Then he mused that this electrifying moment was actually crafted by an AI: "Benjamin helps you take these calcified cultural objects that we all recognize too easily and it automatically caricatures them. If Hoff is a caricature of a caricature, Ben takes it a step further." 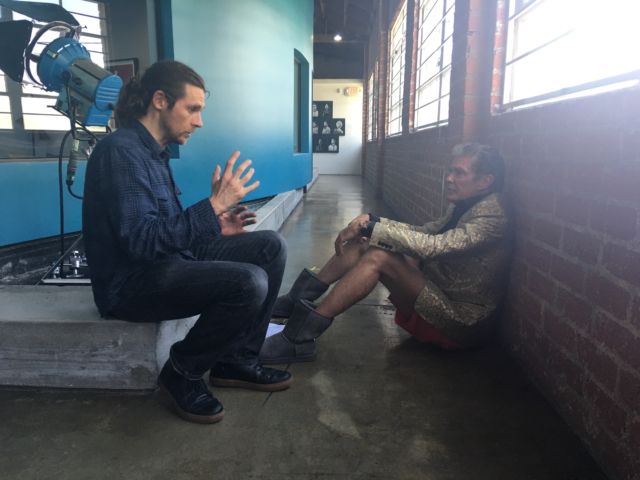 Behind the scenes of It's No Game (Hoff may be wearing Baywatch shorts that he happened to have in his car).Allison Friedman

Writing in an algorithmic world

Like its predecessor Sunspring, It's No Game was made as part of the 48 Hour Film Challenge at the Sci-Fi London Film Festival. Also like Sunspring, It's No Game has bent the rules of writing. Louis Savy, who organizes Sci-Fi London, called Sharp and Goodwin's latest film with Benjamin "counter-culture hacking...it's exciting if not a little scary."

Perhaps the scariest part of It's No Game, at least for a writer, is the idea that the writer's strike might be resolved by hiring AIs. Sharp is currently writing a screenplay about the de-extinction of wooly mammoths and said that "the possibility of the writer's strike is looming large in my life." But he isn't afraid that Benjamin will become a scab like Robocop did during the Detroit cop strike in the eponymous movie. "In a way we're being a bit satirical about people who are afraid of what Ross [Goodwin] and I are doing."

In the year since Sunspring came out, the two have spent a lot of time answering anxious questions from people who think robots are about to take their jobs. Goodwin said: "I've thought a lot about the invention of photography—before that, creating photorealistic images required talent and training. Then the camera came along. It didn’t make painting irrelevant. The camera set painting free. One of the things we’re doing is setting writing free." Plus, added Sharp, "If we ever get to the point that machines are good enough to replace us, then maybe that means we’ve invented a new form of intelligent life whose stories we want to hear."

Benjamin the AI hasn't become more sophisticated since his first writing job on Sunspring, but he has multiplied. Goodwin trained six different models to write the dialogue in It's No Game, mostly using the same long short-term-memory recursive machine-learning algorithm that generated the screenplay for Sunspring. Put simply, the algorithm learns to create long sentences based on learning rules from a corpus of writing. In this case, the corpuses were comprised of dialogue taken from several collections of films and television series. Only the ballet sequence was written by a different algorithm, called context-free grammar, which uses basic rules to generate short phrases from words. One of the models, called the Soliloquizer, was also used in Sunspring to generate the final, ultra-strange speech; it was trained on the Cornell Movie Dialogues Corpus.

This time, Goodwin chose to train his algorithms on subtitle files rather than screenplays. This gave him and Sharp lines of dialogue without the truly odd stage directions and character names from Sunspring. But the biggest change was that Benjamin wasn't as much of a unified voice. Instead he'd become many versions of himself, much the way the AI character played by Scarlett Johansson in Her does. "Having all the different models definitely made Ben feel more like a tool, or more disbursed anyway," Goodwin said. "As I was generating the material, I was thinking: will this soon be a common way to make a screenplay? Writing in multiple voices is challenging for any writer, and it just seemed so useful to be able to summon various voices on demand."

Pondering other people's fears about AI, Sharp returned to the topic of his beloved 80s Hasselhoff shows. "The irony is that story of our tech helping us, of AI helping us, is one that kids found inspiring on Knight Rider," he said with a grin. "Now I have my own thinking car that helps me with my mysterious things."