Summary: The Gartner Magic Quadrant for Data Science and Machine Learning Platforms is just out the big news is how much more capable all the platforms have become.  Of course there are also some interesting winner and loser stories.

The Gartner Magic Quadrant for Data Science and Machine Learning Platforms is just out for 2020.  The really big news is how many excellent choices are now available.  In a remarkable move, the whole field of competitors has moved strongly up and to the right offering more and more Leaders or near-leader Visionaries than ever before. 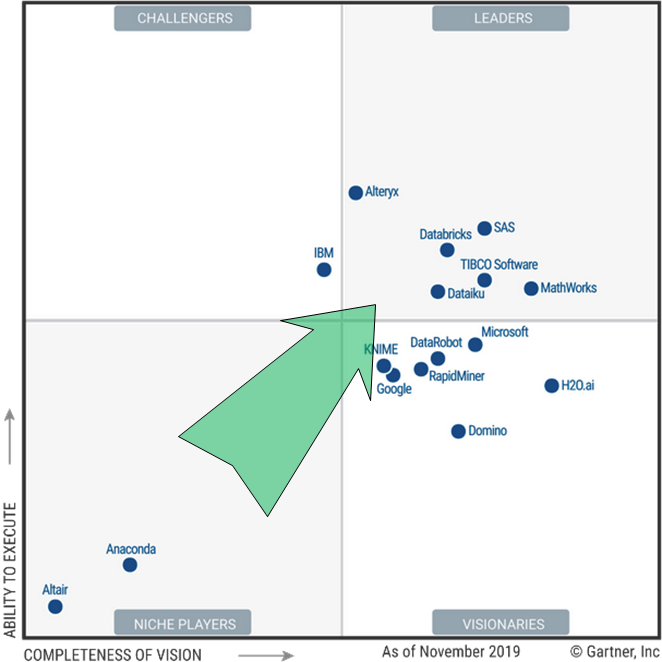 It’s a mark of maturity in our industry that so many platforms offer fully capable model development, operationalizing, and management features.  That list of requirements as defined by Gartner grows longer every year and earning a better rating requires increasing capability and increasing customer satisfaction.

What Are the Major Changes?

As in previous years we’ve charted the major changes in position using green arrows for improvement and red arrows to indicate a reduced rating.  The blue dots are current ratings and the gray dots are from a year ago. 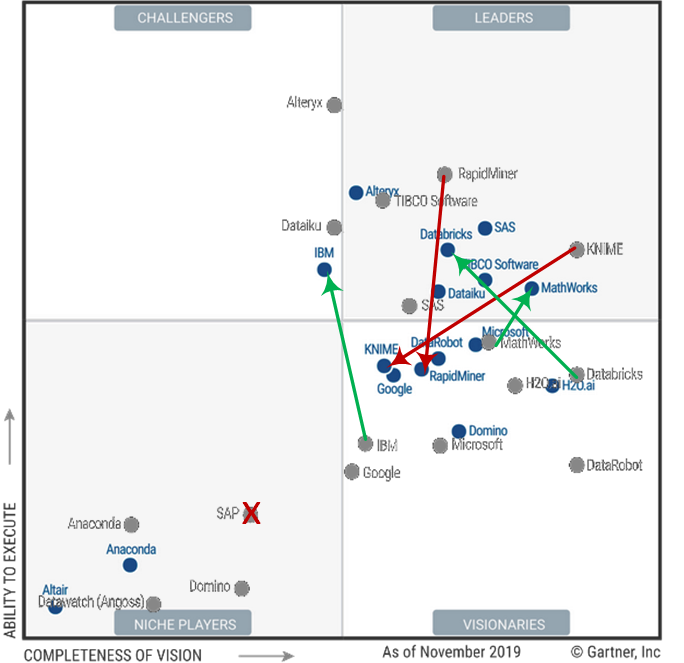 To avoid overwhelming the reader visually we’ve only marked those where a platform made a major move from one quadrant to another.

Two platforms, Databricks and IBM made significant moves up showing big improvements.  Mathworks, which was very nearly in the Leader group last year made it over the line from Visionary to Leader with a smaller move.

Databricks first made it onto the chart just two years ago, has been a leader of the Apache Spark community and a major contributor to open source.  Its code-oriented approach skews distinctly toward technical users.  Like many top end players, Databricks deploys teams of customer success engineers to ensure that its customers are getting the maximum benefit.

IBM that was the exalted leader in 2017 had slipped for two straight years completely out of the leader box to be ranked as a mid-tier player.  Initially they confused the market with three separate DS platforms (Watson Studio, the Data Science Experience, and SPSS) which have now been more tightly integrated into Watson Studio.  Users continue to observe that the number of IBM products needed for true end-to-end data science continues to grow, but applaud IBM for its better integration and refreshed features.

KNIME fell from the lead largely over issues of lower visibility and slower revenue growth.  Difficulties with training new users and slow performance when working with large datasets, long workflows, and complex or multiple extensions were also noted.

RapidMiner also fell from the lead over issues of slower revenue growth.  With a very large number of users for its free version it has continued to struggle to convert them to paid users.  Otherwise their offering remains technically strong.

Only one platform was dropped this year, SAP which has taken a step back to launch a new DMSL offering.

Datawatch (Angoss) was acquired by Altair at the end of 2018 which now makes the chart.

Google that was recognized as an end-to-end platform just last year continues to improve.  Amazon with AWS however did not make the selection criteria as Gartner judged that AWS is marketed to and used primarily by application developers and not data science end users.

Gartner continues to divide the industry into increasingly smaller and more specific user groups.  Gartner goes out of its way to point out that a Leader may not be your best choice and that many organizations might find value in niche players more suited to their needs (FICO comes to mind for financial services).

The other major Magic Quadrant that may deserve your attention is “Analytics and Business Intelligence Platforms” which is also just released for 2020.  The significance here is that Gartner projects that by 2022 “40% of machine learning model development and scoring will be done in products that do not have machine learning as their primary goal”.  This is a clear signal for increased consolidation of platforms ahead.

You're right.  Sorry, looks like I missed that one.

If you're highlighting platforms that made major moves from one quadrant to another, you should also mention Domino Data Labs.