5 Dimensions to Consider for Governments Turning to AI

Artificial Intelligence might not be the newest entrant in smart technology but, its redefined usage is. It has recently gained mass popularity. Now, it is being accepted across many industries. With the general public embracing AI, government agencies are also considering this fantastic technology. AI can imitate human's decision-making skills. Thus, it has the potential to improve the decision-making ability of various applications. The AI engine is useful for multiple applications such as

AI can add extra functionality to the governmental working process. It can offer cheap and innovative ways to handle complex situations. 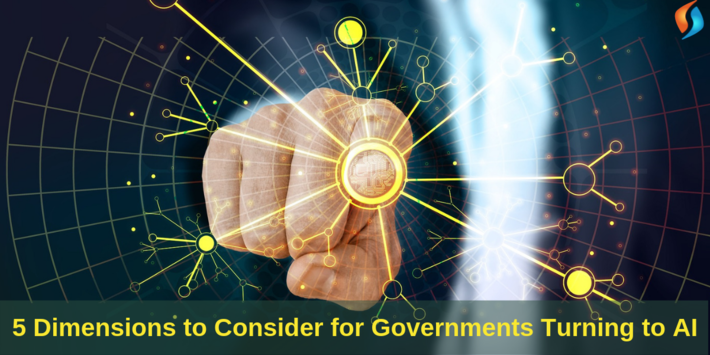 Implementing AI into government functions won't be a smooth path. Many government employees are protesting against it. They are doing it because they fear losing jobs. The US Bureau of Labor Statistics says a different story. They say that there won't be any loss of human force till 2024. Seconding this report, a survey state A that up to 18% of govt. Jobs might be automated by 2030.

For employing AI into government proceedings, the artificial intelligence companies in India are ensuring that the algorithms accurate and neutral. They are trying to make the technology stable. This will help to keep the intended output unchanged in case the input is different. In the case of public sector companies, algorithms must be self-explanatory for a varied spectrum of decision makers. The most important thing is that public sector employees must be well aware of the places where AI has a presence.

In comparison to the private-sector employees, public-sector employees have little or no authority to suggest the adoption of new technology into the work process. So, in case they are aware of fields of AI application, it will help in easy adoption. Gradually, more and more people will advocate for the same.

Different dimensions to consider for Government Turning to AI

Here are different dimensions to explore before AI development companies can integrate AI with government functions. It is essential to strike the right balance to ensure its seamless acceptability.

In the case of Artificial Intelligence, accuracy is its heart and soul. Public-sector companies can judge the performance of a machine from their decision-making skills. There are many ways in which the AI engine is fed with patterns and data. Due to this, a single algorithm can give out many outcomes based on its intelligence which may or may not be precise. Users can study the outcomes. Then they can choose the best option for their usage as per the situation.
One word of caution: Ensure that clear baseline accuracy for decision making exists before implementing an algorithm. Whether it is based on historical human decisions, rudimentary scoring, or criteria-based approaches. Knowing when the algorithm performs well and when it does not, is helpful both for making a case to use it as well as to establish incentives for continued improvement of the algorithm.

For an AI algorithm, fairness means all about an unbiased decision-making system. There are times when a certain scenario involves some “special class of people” and their interests. Users often try to bypass such people's interests by creating an especially biased algorithm to protect them.

In the case of AI usage in government functions, there is a need for a proper declaration of how biased is the algorithm. Also, what are the parameters for the creation of subgroups? Certain cases need to be addressed. Let’s see them:

i. Deliberate blindness: The algorithm is created in such a way that if there is an inspection on the software, the particular group is saved because it's kept within a subgroup not to let the AI realize it is being biased.

ii. Demographic or statistical parity: It is achievable by taking an equal amount of people from all the subgroups. There can be limitations set in the algorithm for many people from different groups so that equality is maintained.

iii. Predictive equality: This can be the best way to ensure fairness. In this method, the equality is kept at the algorithm’s discretion for different groups and is restrained from forcing on the outcome by making it desirable.

Fairness through predictive equality can be established by developing fair practices and innovative algorithms. Thereafter, employing them for data science analysis by machine learning companies in India and abroad.

AI algorithms must be self-explanatory. They play a key role in the easy adoption of AI technology. An AI technology is not worth any use if it is not able to explain its line of action. AI may or may not replace humans in the future. But a combination of humans with the machine has always created a masterpiece. The magical duo can take far better decisions than the lone counterpart can ever take! For example, in judicial hearings or any comment policy hearings, AI can be used to assist humans rather replacing.

For instance, in government welfare programs for providing resources to a large number of people. AI embedded system can assist officials in selecting the eligible persons. It can work in a similar way for scholarships, grants or providing permits. At times, going by the rules can prove to be risky for a person who might be in dire need of a grant. But might lose out the chance by some numbers. Therefore, the room for an exception with proper reasoning can be made only when developers understand the patterns. According to a report by NITI Aayog, the worldwide public cloud services market is expected to rise by 21.4% in 2018. It will touch a total of $186.4 billion. That is a straight $30 billion rise from 2017. Gartner Inc. states this rise can be achieved through improved computational techniques.

Simple rules might be easy to explain but can cause chaos as well. Complex algorithms will help the machine to take more proper steps. Let's face it; explicability is a hypothetical situation in case of AI engines. It can be important than accuracy where the user isn't answerable in case of an error and vice versa. However, more people prefer complex algorithms for accurate results. This is where government departments need AI consulting services to come up with better results.

The biggest problem with programs is that they become prone to lags. It happens due to an inefficient code which is not governed by algorithms but data from obsolete databases. It can be taken as a simple example of a butterfly effect where a slight oversight can burn an entire building down due to a chain of events. Due to this reason, the AI engines for various decisive tasks face tremendous difficulties.

There is a subtle but dire need to upgrade the models for better working. The accurate time interval might be difficult to estimate. However, the speed of degradation can be studied over which the software loses performance. Backward-looking data to check the algorithmic performance of models can be useful. It can estimate the time range during which the performance dipped so that the retraining can be done at that point. Everyone agrees that AI models need upgradation at regular intervals. But at times there is a sudden change of policy. At such moments, the changes made must not compromise with the stability of the program model at any cost.

AI is all about developing the right algorithm, realizing the value of its output and proper adaptation of the output. Government departments must be aware that AI is nothing without proper machine learning which offers an unmatched user experience. This experience shall help the developers to find the loopholes in code and improve the engine further for easier adoption.

Machine learning algorithms can be accurate but simultaneously confusing due to large amounts of data fed to them. Since they don’t follow the rules line-by-line, they often go against it due to its highly human-like working process. The result is they often get rejected due to the very reason they had been employed at the very first place.

Therefore, the adoption must not be kept at the eleventh hour and must be incorporated from the very first day. It is a known fact that a final user is the best validator of any program/software. Adhering to the first line, target users might aboard the development process to help the machine learning consulting companies.