Would you read a postcard from Sears? Revolutions in marketing before the digital age

Digital marketing nowadays is powered by cutting-edge machine learning technologies (and not so cutting-edge analytical methods). 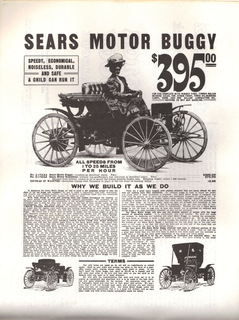 Digital methods, however, were not nearly as revolutionary in their impact as the advent of direct mail, pioneered by the Wards and Sears catalogs nearly a century and a half ago. Riding on the backs of an expanded mail service, these catalogs brought retail offerings to a whole new set of customers. Montgomery Ward introduced his "catalog" (a single page listing 150 items) in 1872, and it was followed, nearly 20 years later, by Sears Roebuck.

So how did those early direct mail efforts do? In 1892, Sears Roebuck sent out a promotion via postcard to 8000 recipients and got 2000 orders. A conversion rate of 25%! Today, a conversion rate of 2.5% would make digital marketers jump for joy. One key feature of early direct mail is something that it shares with today's digital advertising - the ability to measure performance. Today's clicks on ads can usually be traced back to users and followed through to conversions; responses to yesterday's paper mailings could be traced to list segments (and often to particular consumers).

Over 100 years later, Amazon revolutionized the field of retail with statistics, machine learning and a mastery of logistics . Amazon pioneered the idea of recommending purchases to customers and potential customers via a simple algorithm: Identify (using statistical similarity measures) customers whose purchases and ratings are similar to yours, then identify their purchases and preferences, then find among them the most popular items that you have not bought.

This GIF (left)explains it visually. This is a user-based "collaborative filtering" approach; a computationally-faster one is an item-based approach: for the item of interest, find items that were co-rated (or co-purchased) by other users, then recommend the most popular among them.

Early pioneers were taking advantage of the pent-up demand and rapidly industrializing economy, but it also remains true that the technological leap in the 1880's, though consisting of little more than paper mailed through the post office, had a greater effect than the digital revolution of recent times.