The opinions from business seemed to cluster around a tacit definition of data scientists as researchers, primarily from statistics or mathematics backgrounds, who are experienced in machine learning algorithms and often in some domain areas specific to our business, (e.g. actuaries in insurance), but not necessarily having skills of writing production-ready code.
The key driver behind the somewhat opposing strain of thought came from the developers and data engineers who often quoted Cloudera’s Director of Data Science – Josh Wills – famous for his “definition of a data scientist tweet”:
“Data Scientist (n.): Person who is better at statistics than any software engineer and better at software engineering than any statistician.” 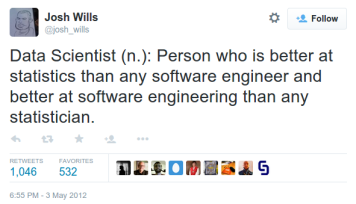 Wills’ quote reflects the practical issues in finding “unicorn” data scientists and having to do with the best of what’s on offer for a multi-disciplinary area like data science. It’s also perhaps based on his work in startups like Cloudera and web giants like Google, where adopting agile practices like DevOps allow data scientists closer interaction with engineers and therefore substantial experience in deploying to production. Unfortunately, that’s always a challenge due to bureaucracy, mindset, lack of informed opinion and cultural barriers in larger or old-world organizations with legacy systems and practices.

As in any startup or lab working on problems in data science and big data, it’s important for us to clear misconceptions and get the team to a shared understanding of commonly used terms to establish a foundational common language, which would then allow developing a shared vision around our objectives. Therefore it’s necessary to review going beyond definitions of the “unicorn” data scientists and looking at what happens in real-life teams where data scientists work, like ours.

A lot of the data scientists actually think of themselves as mathematicians, trying to formulate business problems into math/statistics problems and then trying to solve them in the data science projects.
However, the popular misconception arise sometimes out of the big-data hype articles churned out by big data vendors, including some evangelists – who equate data scientists with superpowers across a multitude of disciplines.
The developer’s views arise due to their unique perspectives on the complexities of data wrangling and fragmentation around tools, technologies and languages.

The reality, as always, is quite different from the hype. There are actually probably just a handful of the “unicorn” data scientists on the planet, who have superpowers in maths/stats,AI/machine learning, a variety of programming languages, an even wider variety of tools and techniques, and of course are great in understanding business problems and articulating complex models and maths in business-speak. For the lesser mortals, and less fortunate businesses, we have to do with multiple individuals to combine these skillsets together into a team or data science squad.

In terms of hiring, building a data science team becomes much easier, once we get around the idea that the “unicorn” data scientists are not really available. The recruitment team and hiring manager can then focus on the individual skills that are required on the team and try to hire for profiles with strengths in these skills. Once hired, the manager’s role switches to building the team in terms of setting expectations and facilitating collaborative team dynamics to evolve self-governing teams, which can then focus on achieving the objectives in a collaborative manner, instead of having to be superheroes.

The roles in a data science team

So what roles would a data science team have? Depending upon the organizations’ objectives, the team could either focus on service-oriented consulting gigs, or focus on building reusable assets or data products. 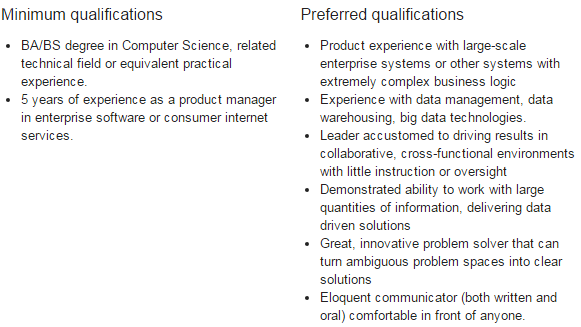 Irrespective of whether the data science teams focus on consulting services in one-off projects or build data products which are reused, in both cases, the team would still require a minimum foundation to build on – in terms of processes or shared understanding, and tools and platforms to perform the actual work. You'll need to ensure the data engineering requirements for such tools and platforms are in place, so your team is set up for success.

Executable English can help to solve the problem of unsupervised data scientists who find it difficult to deploy their code into production.

It's live online at www.executable-english.com with many examples. Shared use is free.  Nothing to download.  No commercials.