In an earlier blog post on Making the Business Case for Text Analytics , I had spoken of the importance of Social Media Analytics and specifically Text Analytics within the context of Social Media.for big and small business. Social Media plays a critical role in today's world  in  understanding, measuring and influencing the real time perception of your company and/or brand.

Social Media contains a wealth of information  which needs to be analyzed and understood in a broader social and demographic context including, trend identification and receiving feedback from segments beyond what the traditional marketer or customer service center is accustomed to for receiving feedback. Given the sheer volume of data and the large number of users  talking (posting, tweeting, etc.) about any given topic, visualization can be used very effectively in Social Media Analytics to effectively sort through the clutter and make sense of what is being said. Visualization enabled Analytics can be used to identify the trends and key influencers that may not otherwise evident. 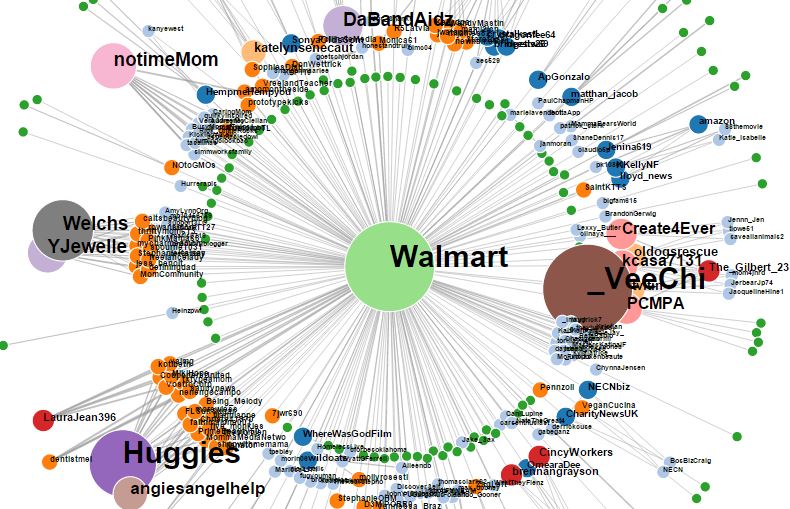 For example, in the Twitter network graph (built using Python NetworkX and d3.js) shown here for @Walmart, we see a strong tweet connection with Huggies. Network graphs like the one above can be used to study interactions in social media which may lead to insights that can be useful in the real world.

Another Visualization Aid worth considering is the World Cloud.  Word Clouds however need to be used thoughtfully and are best used for Exploratory Qualitative Analysis. They are not appropriate in situations requiring any advanced Text Analytics or to make sense of complex topics. For example, within the context of social media, a good use of a Word Cloud would be to identify the most common words usually associated with the topic being studied to take action if those words no longer appear. Word Clouds can be used in conjunction with Sentiment Analysis to identify the key influencers and the words most associated with a positive brand image and conversely the keywords and users who have a negative perception of the business.

When used together Visualization tools like Network Graph Analysis and Word Clouds can form the backbone of a strategy for more effective Social Media engagement.